December 15, 2020—FORT BRAGG, Calif. Trout Unlimited’s North Coast Coho Project announced today the completion of two projects that will help both imperiled fish species and an historic railway in one of the most important river systems on California’s North Coast for Coho Salmon and steelhead.

These projects, on the Noyo River in Mendocino County, will restore access for endangered Coho Salmon and threatened Steelhead Trout to nearly two miles of key spawning and rearing habitat in the upper watershed. The projects replaced two culverts along the Skunk Train railway and a third culvert on an adjacent timber road that prevented fish from utilizing valuable habitat.

Once abundant in coastal streams north of Santa Cruz, Coho salmon have been in precipitous decline for the past half-century and are now one of the rarest native fishes in California. Federal and state recovery plans for Coho rank improvement of fish passage in the upper Noyo has one of the highest priority actions for improving prospects for this species on the Mendocino Coast.

Trout Unlimited (TU) led these projects with support from many partners, including the Mendocino Railway (commonly known as the Skunk Train), the Soper-Wheeler Company, the Mendocino Land Trust, the California Department of Fish and Wildlife, NOAA Fisheries, the National Fish and Wildlife Foundation, Michael Love and Associates, AECOM, Granite Construction, the California Fish Passage Forum, The Nature Conservancy, and the Salmonid Restoration Foundation.

“The Skunk Train is a business that is absolutely committed to projects like this. We have been operating along the Noyo River for 135 years now,” said Robert Jason Pinoli, Vice President for Mendocino Railway and General Manager “Chief Skunk” of the Skunk Train. “In the old days, we had so many salmon and steelhead in the river that people used to say you could walk across on their backs. Today, that isn’t so.”

Although the Noyo River is home to one of the most stable populations of California Coho, the federal recovery plan rates this population at moderate to high risk of extinction. From 2013-2018, the 5-year average for returning adult Coho was 2,755 (the recovery target for the Noyo is 4,000).

“Restoring access to more than 1 mile of Coho Salmon habitat in a watershed with consistent returns of Coho Salmon gives me such hope for recovery of this species on the Mendocino Coast. Welcome home Coho Salmon!” said Chris Ramsey, Senior Environmental Specialist with CDFW.

Both state and federal recovery plans for Coho Salmon in this region also identify reducing sediment deposition sources as an important action step for species recovery. Decrepit culverts are especially problematic, as they can cause erosion into streams—sometimes delivering such large amounts of sediment the impact on fish is catastrophic—and prevent fish from moving throughout the river system.

Anna Halligan, TU’s North Coast Coho Project Director, said “One of the culverts under the Skunk Train was in such poor condition that the hillslope around it had begun to erode and was delivering fine sediment into the Upper Noyo River. A large storm event could have saturated the soils and caused slope failure which may have buried about 3 miles of the river under one foot of fine sediment, which is roughly equal to 840 full dump trucks. This kind of disaster would not only impair water quality in the river, it could also  significantly impact a salmon population that is showing signs of recovery and, if the culvert had collapsed, it would have affected tourism on the Skunk Train’s Willits line.”

This suite of projects has been in the works since 2010, when Trout Unlimited commissioned a detailed assessment of sediment sources and fish passage barriers along the railway. The Noyo River is currently listed under the federal Clean Water Act as an impaired water body due to excessive sediment and elevated water temperatures.

The construction phase of these projects began in June of this year and was completed in October. The two railway culverts were replaced with large structural steel arches. A third culvert on a private timber road directly upstream from one of the rail culverts was replaced with a bridge. The stream channels were also restored during construction, ensuring fish and other aquatic organisms will be able to migrate successfully.

“Large projects such as these require extensive cooperation, dedicated partners, and time. This project never would have happened without the investment of so many diverse groups all committed to Coho Salmon and their habitat,” said Ramsey.

“Working with an entity like Trout Unlimited makes what may seem impossible, possible,” said Pinoli. “It is their vision and passion that has helped us to see this project through to completion. The fish are winners today and we couldn’t be happier.”

“Projects like these can take a long time to get off the ground and require a lot of support from public and private entities, but their benefits are immediate and long-lasting,” said Halligan. “Clean water, healthy fisheries, and a robust local economy are good for everyone.” Such projects also benefit local communities by employing local contractors, helping to sustain existing fisheries, and supporting a mainstay of the Fort Bragg and Willits tourism economy, Halligan noted.

Photos of the Upper Noyo Fish Passage and Sediment Reduction Project
available upon request, with permission to reproduce. 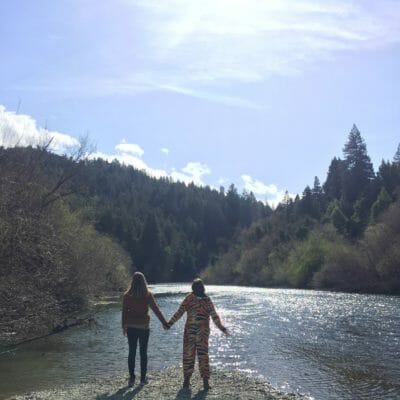 Voices from the River: I’m not fishing to catch a fish