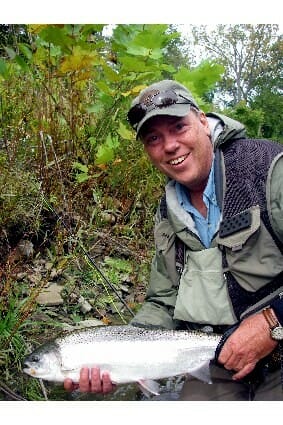 Bryan Moore, Vice President for Volunteer Operations & Program Development
Bryan began working for Trout Unlimited as the program manager for the Potomac Headwaters Home Rivers Initiative in September, 2005. He became director of Eastern Project Development in May, 2007, and moved to his current position in October, 2007. He was previously self-employed in the insurance restoration industry for eighteen years as a property restoration specialist. Bryan is a fifth-generation native of West Virginia where he grew up fishing the trout streams in the east. After a nineteen year stay in the west, partially dedicated to exploring western trout waters, he returned to his home waters and became an active TU volunteer and leader advocating for stream protection and restoration. In addition to exploring trout streams, he enjoys bowhunting, backpacking, and family camping.