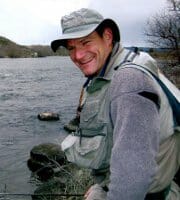 I first became a TU member in 1979 when my father bought a family membership, and we would participate as chapter members in restoration work in Southwestern Wisconsin. Years later, after college and four years in the Marines, I was hired to create a TU staff presence in California, something that I did for nearly five years before moving to Idaho to be the Executive Director of the Henry’s Fork Foundation for nine years. I’ve been back with TU since 2011.

My real connection to TU is the same connection that each of you share: A deep love of trout fishing, and the conviction that without Trout Unlimited’s vigilance and leadership, the future of trout and the places that trout live would be far less positive. Donors are a huge part of TU’s proud history and its bright future, and they are vital to the future of America’s trout and salmon. I’m always eager to speak with our community of donors: 703-408-9401