On Thursday, July 23, the U.S. Army Corps of Engineers released a critical document in the permit application review process for the proposed Pebble mine: the final Environmental Impact Statement (FEIS). The FEIS shows more than 191 miles of streams and 4,614 acres of wetlands would be impacted if phase one of the proposed Pebble mine advances, with 185 miles and 3,841 acres permanently impacted.

The FEIS is one of the final critical documents in the permitting process for what could be the largest open-pit mine in North American in the headwaters of the largest sockeye salmon fishery on the planet.

Take action today. The White House needs to be reminded that anglers depend on Bristol Bay. Please send a follow up request for the president to deny Pebble’s permit through the Army Corps of Engineers now.

The FEIS will be the basis for the Army Corps of Engineers’ record of decision, which will grant or deny Pebble their most important federal permit. The Corps must wait at least 30 days after the release of the FEIS to issue their record of decision.

“The proponents of this proposed mine remain unable to prove they can move forward safely, without jeopardizing my industry and others. They’ve had their chance to go through the process. Now enough is enough,” said Brian Kraft, president of Katmai Service Providers, which represents dozens of sportfishing and tourism businesses in Bristol Bay. “If this administration wants to uphold rural American jobs, then the only option is to deny this permit.”

In January 2019, the Army Corps of Engineers issued a Draft Environmental Impact Statement (DEIS), which was followed by a national public comment period. Over 685,000 Americans -including thousands of TU members- formally opposed the mine and noted significant inadequacies and gaping holes in the review of the Pebble project proposal.

Other federal agencies – including the Department of Interior, the EPA and the State of Alaska – identified these issues and raised significant concern in their comments, including as recently as few months ago during review of the preliminary final EIS, which remain unanswered today.

Following the agency comments, Alaska Senators Lisa Murkowski and Dan Sullivan publicly stated that if the Army Corps fails to address the concerns that agencies noted with the DEIS, a permit should not be issued.

The release of the FEIS is a critical component of the rushed and fast-tracked two year permit review process for the proposed Pebble mine that the Army Corps of Engineers began in December 2017. Need an overview of how the process has carried out since then? Check out the video below.

In May, over 250 fishing, hunting, and outdoor recreation businesses and organizations, and 31,000 sportsmen and women signed a letter calling on the president to deny Pebble the permit. The President, through the Army Corps of Engineers, still has the power to choose a powerhouse American fishery, 15,000 American jobs and a sporting paradise over a foreign mining company with a risky and incomplete plan.

Take action today. The release of the FEIS launches the last window of time for the President to intervene before a key permit for the mine could be issued. Sign our request to the President -yes, again –  asking him to stop the proposed Pebble mine now. 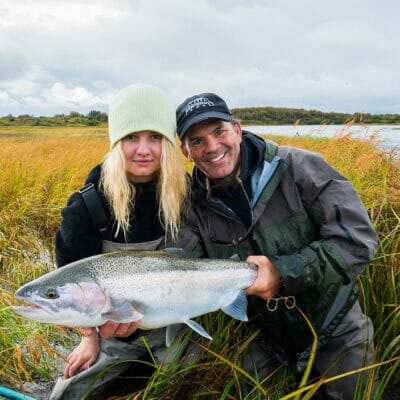