By Paul A. Doscher

Every late May or early June, it’s time to find the packing list, figure out which flies in the box are running low, get the groceries and head for fish camp. My friends Jack, Bobby, Tom and an assorted list of other friends who can occasionally make it, all engage in this annual ritual and make the four-hour drive north with me. We do it every year, because the destination is one of those iconic fisheries in northern Maine where the fish are all wild, the brook trout are native and the fishing pressure is as much from loons, eagles and otters as it is from anglers.

The place belongs to a long-time friend whose family built the comfortable log cabin with another family back in the 1970s. They had, through the good fortune of professional connections and friendship, been offered a lease on a small parcel of land on one of those remote nearly pristine lakes that make northern Maine the home of the last, best brook trout habitat in America. The site for the cabin was right at the outlet of the lake, where the flow into the river provides what can only be described as a ‘fast food joint for fish’.

Our pilgrimage to fish camp began back in 1995, when we were first offered an opening in the highly prized early season schedule at the camp. That first year was nothing short of amazing. The water was just the right temperature in early June, the hatches were profuse, and the fishing was stunningly good. The third member of our group spent most of his non-fishing time sitting on the porch, occasionally playing his fiddle and stopping periodically to say, “What an amazing place!” We vowed to come back every year, as long as the owner would let us.

I know there’s a tendency for memory to exaggerate things that are memorable and forget things that are not. But over the years, despite the understood vagaries of the weather, it sure feels like the seasons and the fishing have changed. While one couldn’t predict when ‘ice out’ would happen and the end of snowmelt-created spring run-off would end, it generally occurred within a week or two of the same day. After the thaw, the water would slowly warm until it was at that sweet spot for fishing by late May or early June. It no longer seems that way.

And the aquatic insect hatches, from the dreaded blood thirsty black flies to the beloved caddies and mayflies, all seem to be either diminished or erratic. For the past 5 years, for example, we’ve been at fish camp during dates from late May to the second week of June: never saw a mayfly hatch and barely much of a caddis hatch, and the fact that the black flies were almost absent was small consolation.

Something has changed. For the past couple of decades, we’ve been having significantly larger rain events in spring and fall, including a few 100-year storms. Those storms were supposed to have a 1 percent chance of happening every year. Someone needs to do some recalculating. I can’t help but think it’s hard for robust aquatic insect populations to reproduce and survive successive flood events.

Another change I’ve noticed is that summer water temperatures that drive the fish down deep into the colder waters of the lake seem to be arriving in early June. So much for dry fly fishing when that happens during our annual trip.

All of this is certainly anecdotal observation. But it appears to be entirely consistent with the predictions that are coming out of the peer-reviewed research of climate scientists at the University of New Hampshire and other respected institutions. Those models, which have been growing more robust over the past decade thanks to more powerful computers and massive amounts of climate data, are telling us to expect shorter winters, bigger storms, hotter summers and deeper droughts. More extreme weather.

These effects may be why a couple of our fish camp crew had been pondering whether to keep going or not. “The fishing just ain’t what it used to be” is the complaint. The camp owner has kept a detailed log of fish caught since the 1970s so we know we are not just imagining this. We also know it’s not because of poor management by the state, as there have been good regulations and wild trout management policies here for decades. It’s not likely because of timber practices on the surrounding landscape, as those have been less impactful in recent years. There aren’t more anglers, as access to the area is strictly controlled by the timber company landowner and the watershed is large enough that it would take orders of magnitude more anglers to have an impact.

That leaves climate change as a likely culprit. There’s no way to prove it for this one particular place of course, without a lot of data collection and good scientific analysis. But what we are experiencing is certainly consistent with what the scientists have been telling us to expect. I hate to say it, but I may eventually become one of those curmudgeon anglers who says, “Back in the day, the fishing used to be awesome here.” Not so much anymore, and these personal observations are one of the reasons I have been actively involved in TU’s volunteer-run NLC Climate Change Working Group working to improve TU’s engagement in, and our membership’s awareness, of climate change, one of the Critical Focus Areas of our National Conservation Agenda. If you are interested in doing the same, we invite you to join us.

Paul is a former professor of environmental science and retired recently from the Society for the Protection of NH Forests, where he ran the land protection programs. He is currently the secretary of the TU National Leadership Council and has served chair of his state TU council, and as a Grassroots Trustee. 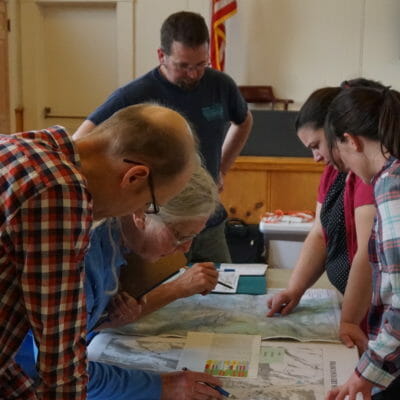