Two bills will move through the Washington legislature this session with the goal of updating the state’s laws protecting its fish and waterways from impacts of suction dredge mining. Though you may see comments from a select few upholding the activity, the science is incredibly clear on negative impacts it causes to our already-stressed fish populations. We’ll say it again:

More specifically, it causes erosion and sedimentation. It mobilizes mercury and other heavy metals. It impacts fish and the aquatic food web by destroying aquatic habitat, physically “processing” fish and aquatic life, creating fish stranding risks in dredging pools (where fish are restricted to poor habitat as a consequence of physical separation from a main body of water), and destroys riparian vegetation.

But don’t take our word for it.

Scientific studies of the effects of suction dredge mining on aquatic environments have been completed ad nauseum by the States of California and Oregon. The results of these studies consistently confirm negative impacts of suction dredge mining on water quality and fish species. In response, both states have created regulatory and legal reforms to protect their waterways. (Again, see below.)

Washington State has conducted numerous studies and scientific reviews of suction dredge mining, which have clearly demonstrated the likelihood of “incidental take” of Endangered Species Act (ESA)-listed species and critical habitat. Incidental take refers to accidental illegal activity (harming the habitat of endangered species) while a legal activity is underway.

This spring, a bill almost passed through the legislature to address these issues, but ran out of time. The bill, SB 5322, would have instituted a ban on suction dredge mining ONLY in habitat that is known to provide critical habitat for Endangered Species Act-listed salmon, steelhead, and bull trout. This is already required under the Clean Water Act, but Washington lags behind in enforcement. The Washington State Attorney General’s Office, Washington State Department of Ecology, Washington Department of Natural Resources, and Washington Department of Fish and Wildlife ALL supported this legislation. The bills will be re-introduced this winter – we urge you to support them!

Federal courts have recently ruled that discharges from motorized mining must comply with the federal Clean Water Act. Oregon, California, and Idaho have all enacted programs to comply and protect fish listed under the endangered species act, but Washington State has not.

Washington is the only state with populations of Endangered Species Act-listed Pacific salmon and steelhead that still allows suction dredge mining and other forms of motorized mineral prospecting in critical habitat for these listed endangered fish and without requiring Clean Water Act compliance. Consequently, Washington State has become a target for out-of-state miners, creating much greater pressure on our streams and a dangerous situation for our water quality and native fish.

This session, we have a chance to fix this problem. Please join us in supporting House Bill 1261/Senate Bill 5322.

Below is a condensed summary of information contained in pertinent scientific literature on the resource impacts associated with suction dredge mining and other forms of motorized mineral prospecting.

Birtwell, I. K. 1999. The effects of sediment on fish and their habitat. Canadian Stock Assessment, Secretariat Research Document 99/139.

Campbell, H.J. 1979. The effect of siltation from gold dredging on the survival of rainbow trout and eyed eggs in Powder River, Oregon.

Harvey, B.H. and T.E. Lisle 1998. Effects of Suction Dredging on Streams; A Review and an Evaluation Strategy. Fisheries 23 (8) 8-17. Available at http://www.fs.fed.us/psw/publications/harvey/HarveyLisle.pdf.

Stern, G. 1988. Effects of suction dredge mining on anadromous salmonid habitat in Canyon Creek, Trinity County, California. A thesis presented to the faculty of Humboldt State University in partial fulfillment of the requirements for the Degree of Master of Science. 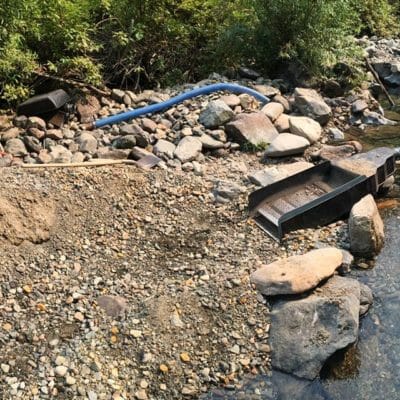