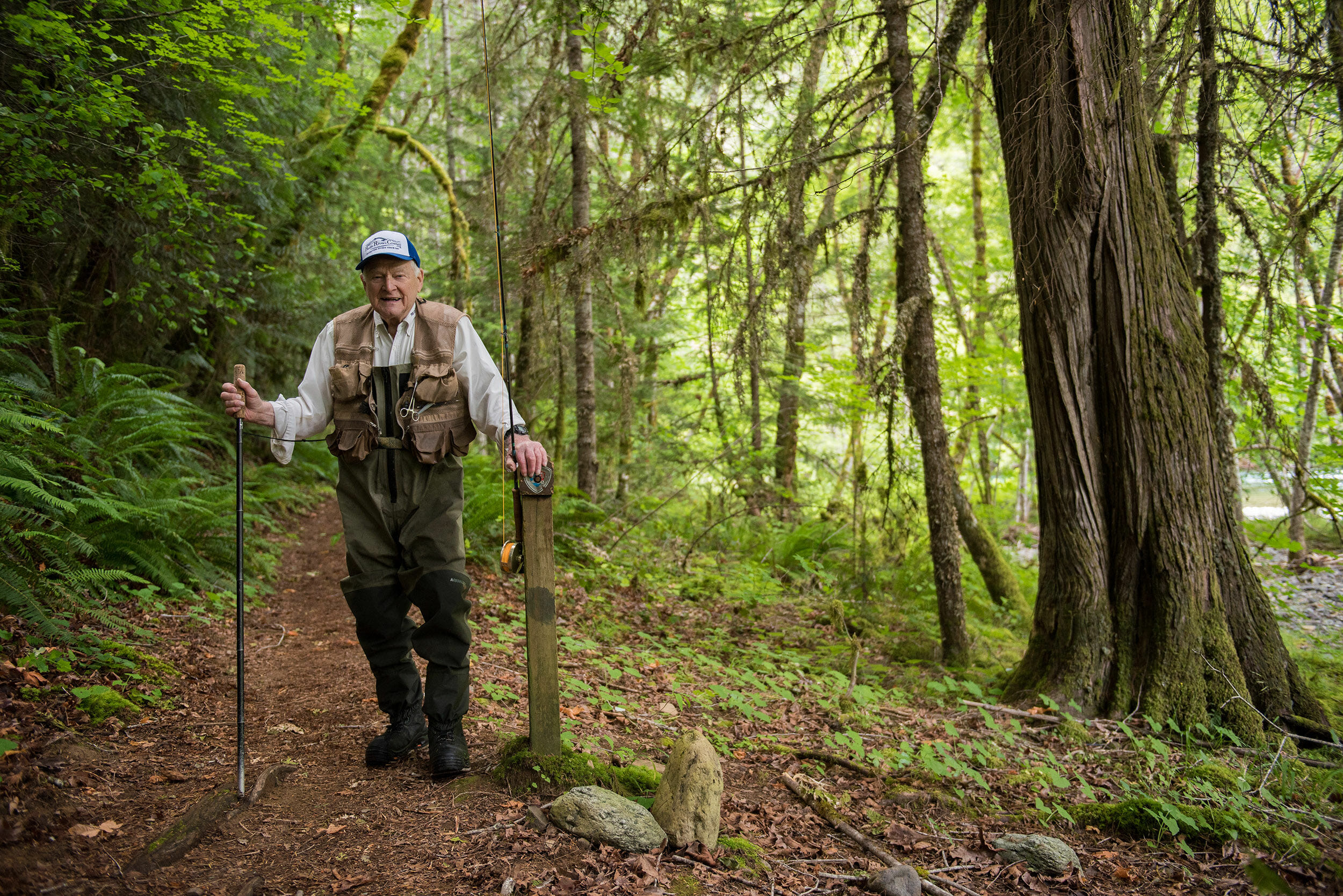 Editor’s note: On Sunday, Jan. 23, the world of fly-fishing and conservation lost a hero when Frank Moore passed away at the age of 98. Moore made his home along Oregon’s North Umpqua with his surviving wife, Jeanne, for nearly 70 years, a good chunk of which the couple owned and operated the iconic Steamboat Inn. TU is remembering Moore’s incredible legacy by looking back at how he and Jeanne touched so many and made such a difference. The following story appeared in TROUT magazine in the summer of 2019.

Ask Frank Moore about his fondest fishing memories and you might expect to hear about him spending time on the river with one of the many famous guests he and his wife Jeanne hosted at their Steamboat Inn on Oregon’s North Umpqua River. Or maybe a story about a giant or particularly ferocious wild steelhead.

Instead, Moore thinks back to days spent with one of his favorite fishing buddies—his son, Frank Jr. “He was only four or five years old,” recalls Moore. “I’d put him upstream in case he fell in so I could catch him.

“I would watch him cast and it was just amazing. He caught so many trout. Every once in a while he’d hook a steelhead but that wouldn’t last long.”

Moore, now 96 and sharp as a tack, is often credited with being the patriarch of steelhead fishing on the North Umpqua. But he is quick to say that anything he gets credit for was the work of many. “I couldn’t have accomplished anything without incredible support from so many people,” he says.

Always, first credit goes to his wife, Jeanne. They have been married for three-quarters of a century, and now they are formally recognized as champions of the North Umpqua with the establishment of the Frank and Jeanne Moore Wild Steelhead Management Area.

The area enhances protections to nearly 100,000 acres of Forest Service land in the watershed. It was formally designated early in 2019 when Congress passed and President Trump signed a wide-ranging public lands and recreation bill. When members of Oregon’s congressional delegation first proposed the area, only Frank’s name was included. But Moore urged them to add Jeanne. “We’ve always been a team,” Moore says.

The Moores settled in Roseburg after Frank returned from World War II, where he was part of the force that landed on the beaches of Normandy on D-Day. For a number of years they ran a cafe in the small town. The work was hard but Frank made time to take many trips to the upper reaches of the North Umpqua.

“Practically every day I would drive up to Steamboat in the evening,” he remembers, chuckling. “It was a 90-minute drive, so I’d have just a few minutes to fish before I’d have to drive home.”

Moore was doing some guiding for Clarence Gordon, who owned a store in Steamboat and ran a fishing camp. Gordon sold the business to the Moores in 1957 and the couple established the Steamboat Inn.

The Steamboat Inn helped draw more attention to the North Umpqua’s steelhead fishery, and that, in turn, built up a bastion of advocates for the stream and the region, with the Moores leading the way.

Jeanne is a botanical expert and her discovery of rare plants in part of the watershed was instrumental in the designation of 1,800 acres as a special Natural Research Area. Frank Moore has always been a champion for the river and its steelhead; in his early trips he had little company.

“I rarely saw another fisherman,” Moore said of those days. “I had the river to myself.”

As access to the area became easier with the construction of a paved highway along the North Umpqua, Moore had more company as he swung flies through the river’s famous pools. Not only did more anglers start visiting, industrial activity increased. “When they started to log, that’s when the river started to change,” he said. “It was still magnificent, but it wasn’t the same.”

In the 1950s, construction of hydroelectric projects high up in the watershed also led to heavy siltation and erratic flows. Construction of the dams was complete by the time the Moores established the Steamboat Inn, though logging continued. There have been many positives for the river’s protections over the years, including the designation of the nearly 40-mile-long fly-only fishing area and prohibition of fishing in key tributaries where hundreds of steelhead seek sanctuary in the warmer months.

The Moores sold the Steamboat Inn in 1975 but have remained fixtures in the community.

Frank Moore is hopeful the new Wild Steelhead Management Area will bode well for his home water. “We’ll have to wait and see,” he said. “But it does put an emphasis on the things we believe in.”

Frank Moore was a giant of conservation. Few have given as much to protect the North Umpqua, and their beloved Steamboat Creek, than Frank and Jeanne Moore. Their legacy will live on in the many lives they made better, and the lands and waters they made better.

Frank will forever be remembered, as he should be, as an exceptional angler and the North Umpqua‘s visionary caretaker.  But he was more than that.  For wild steelhead advocates everywhere, he was a mentor and inspirational leader whose wisdom and foresight will always be a guiding light.

Lost: One owner and manager of Moore’s Cafe. Last seen up the North Umpqua River.

Tongue-in-cheek classified ad posted in the Roseburg News-Review in the 1950s by waitresses who worked at Moore’s Café.

To watch him fish was just a gift. I mean literally, what he could do with a fly rod and a line was just amazing.

Karl Konecny of The Steamboaters, a group of North Umpqua fly anglers, to The News Review.

One of Frank Moore’s “super powers” was his ability to show love. Sadly, in today’s world that’s a very rare thing. He was crazy in love with his bride, Jeanne, and he wasn’t one bit bashful about letting everyone know that. He wasn’t  bashful about telling others that he loved them as well. He was a role model for so many. Being around him, you always felt like you would be a better human being from the experience.

Even at 96, Moore still fishes. “I’ll keep doing it as long as I can get up and down the banks,” Moore said. In the fall of 2018, when Frank Jr. was in town for a visit, the pair made their way to the river. The elder Moore didn’t worry too much about fishing. He was plenty happy watching his son cast—viewing from a downstream vantage point, of course.