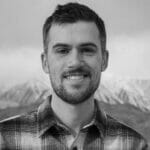 Don From Bakersfield has a thing for coyotes. You can tell by the way he speaks about them, his eyes firing and his voice low.

“So I see him crouched on the ground, just down in the meadow right over there, licking his lips. And then I saw the marmots.”

We’re at 11,000 feet in the heart of the Eastern Sierra and halfway up a boulder scramble. My buddy Cody and I had come across Don resting against a rock, his ‘80s-era external frame backpack riding high as he shifted his weight side to side, a combination fly/spin rod tucked in its side. We’re making good time to camp and not looking to chat, but it doesn’t take more than a friendly greeting for Don to run with it. All topics lead back to the coyote.

“I tell ya, I locked eyes with that coyote, and I just knew I’d ruined his lunch.”

Cody’s polite nature comes through even as he tries to disengage from the conversation—we’re on our third goodbye, and I’ve contributed little more than several “oh wows” to the exchange. I’ve got a year of COVID couch-life firing through my lungs and a true desire to ditch human beings for wild trout. Plus, there’s gold at the end of this trail.

After a decade in southern California, I had yet to catch a pure golden trout. By February 2020, we were almost a full year into COVID lockdowns, and like most anglers, I’d begun to focus my energy into future trip planning. Goldens seemed attainable—no flights or extensive travel required from Los Angeles, and more importantly, backcountry water hopefully protected from the throngs of quarantine anglers that now lined most roadside rivers in the West.

A cursory search online leads most California golden trout seekers straight to the Cottonwood Lakes basin. Located a short drive out of Lone Pine, the Cottonwood trail starts around 10,000 feet and climbs for several miles until it reaches a series of six lakes, five of which contain fish. Despite the backcountry setting and arduous hike, the lakes are well-known and operate on a quota system—60 overnight permits per day.

The permitting process should have given me reason enough to shift my backcountry expectations, but after a year spent indoors, I suppose I just wanted to keep the dream alive. Every morning at 7:00 a.m. that February, I dutifully signed onto Recreation.gov in hopes of securing a Cottonwood permit, and every morning at 7:00 a.m., I’d watch in horror as every single permit disappeared quicker than Rolling Stones tickets. After several weeks spent swearing and muttering over keyboards, I finally nabbed two permits for August.

Cody grew up in the same small region of western Massachusetts that I did, and besides being a genuinely good person to hang out with, he had prior experience fishing the Cottonwood basin. We planned around gear, flies and food for much longer than necessary, probably because we had nothing better to do while passing time indoors.

Twenty-four hours prior to our departure, we made an unpleasant discovery. California regulations for the Cottonwood Lakes had changed earlier that year, and our permitted backcountry dates were now two weeks prior to the opening of the first four lakes. We only had the fifth lake as an option, but so did everyone else—60 anglers pounding one small body of stillwater.

Given the dire drought and subsequent low stream flows, our back-up options were limited. We could attempt the 14-mile grueling trek to Volcano Creek, with its fabled origin-strain goldens and risk coming across dry stream beds, or we could explore other lakes in the basin. We chose the latter, crossing our fingers that we could still get far enough to escape the crowds.

The old adage that trout only live in beautiful places more or less holds true, and the joy I find in discovering new water is often grounded in simply learning that such a place exists. Maybe that’s one reason so many of us value wild places that we hardly ever see—just knowing that they exist, preserved in an ideal state in our memories, ready to be called upon at a moment’s notice.

Of course, nothing bursts that bubble faster than seeing that wilderness occupied by a dozen other human beings in real life. It’s a privileged, selfish perspective that I’m often guilty of, and it ignores that in all cases, that wilderness was never “mine” to begin—simply stolen land and broken promises. So I’m uncomfortable with my own drive to find solitude in the backcountry, and yet it’s that same drive that often acts as my compass to water.

Solitude in this case leads us to a series of lakes off the beaten path to Cottonwood. Besides Don, we encounter few hikers or anglers on the trail. We choose a spot to camp on the hill overlooking the first lake on our list and enjoy an evening casting to endless rises of small golden trout on glassy water. Goldens are alpine trout, evolved to endure at high elevations in their native southern Sierra range with little insect activity compared to the endless hatches we enjoy below 7,000 feet. We can’t see what they’re eating, but luckily, it doesn’t seem to matter. They sip our Purple Haze and Mini Chubbies on the surface with abandon.

As dusk falls, a cackling echo reverberates off the surrounding rocks and across the lake, and Cody and I lock eyes. We retreat to our tents to find two middle-aged women camped close to our own site, drinking and lying in a hammock as they add their own audible narrative to the oncoming meteor shower. They complain of altitude sickness and hard trails but seem content with their accommodations for the next few days. Our trout oasis now firmly in the past, Cody and I agree to press on the next day.

We rise early with the sunrise and pack day bags in an attempt to hike as high, light and far as we can from others. Our initial bushwhacking past several smaller lakes eventually leads us onto a more prominent trail with a steady supply of hikers, campers and anglers. Eventually the trees begin to disappear, and with them, the human beings. Greens of pine and grass give way to grays of rock and whites of low-hanging clouds. We hike higher to where the final ridge-line meets with the sky and eventually look down upon our final destination.

A crater surrounded by large boulders and scree, the contrast of this lake stands out in its shallow, golden banks to its turquoise, deep depths. We hardly need to fish it to appreciate it, but, well, you know how that usually goes. It doesn’t matter where you cast—the splat of a large dry on the surface seems to call trout racing from thirty feet away. And so begins two hours of the dream I’ve dreamt for the past 18 months—fishing dries on the moon for wild, native fish with nary another soul in sight. Cody and I need to speak less and less as we leap frog each other from one bank to the next, finding an appropriate ending to our journey in a large sand flat on the far banks where the trout cruise like bonefish.

Nearing the end of the flat, we see a stocky silhouette rise up across the lake where it meets the trail. The figure pauses as it looks across the water at us, shifting a few times in place before beginning the trek along the bank. As it turns to the side, I see the familiar external frame backpack expose itself with the large bear canister cinched to its bottom. Don From Bakersfield emerges from the craggy shadows in all his glory, and we meet on the shore.

I’m genuinely happy to see the man, and it’s not long before he’s regaling us with an update on the coyotes, one that he claims has followed him several miles to this remote alpine lake. As he tells it, Don had urinated in a perimeter line around his tent the previous night to ward off marmots, only to wake up hours later to find the coyote taking a crap on his scent. I see no reason to doubt him—stranger things have happened this year, and I suppose I feel lucky that this scat-crazed coy dog has no score to settle with Cody or myself.

Since our last encounter, Don had traveled to the Cottonwood Lakes. He describes a crowded scene of confusion checkered with a fair number of dead trout. Apparently, we weren’t the only ones in the dark on the regulation changes, and the way Don paints it, you could hardly have known most of Cottonwood was out of season judging by the groups of anglers and Boy Scout troops fishing the first four closed lakes (which never allow harvest).

Eventually, Cody and I bid Don adieu—I’m sure this isn’t the last we will see of him. We turn to the view below, the lakes dotted with day hikers, campers and fishermen, and below that, the valley with its highways, lines of cars, gleaming industry and crowded rivers. I suppose this is as remote as it gets right now, and I smile as I turn back to see Don pacing his scent line in the fading afternoon sun. Barring coyotes or Boy Scouts, I think we’ll be fine.