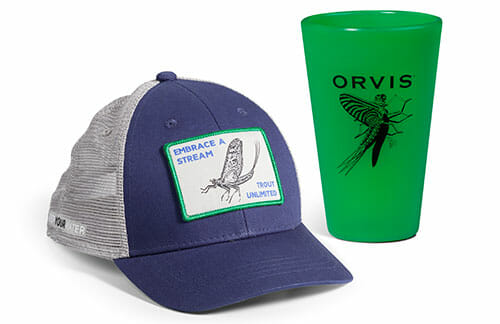 July 2009 marked the 50th anniversary of TU’s founding on the banks of the Au Sable River near Grayling, Michigan. The 16 fishermen who gathered at the home of George Griffith were united by their love of trout fishing, and by their growing discontent with the state’s practice of stocking its waters with “cookie cutter trout”—catchable-sized hatchery fish. Convinced that Michigan’s trout streams could turn out a far superior fish if left to their own devices, the anglers formed a new organization: Trout, Unlimited (the comma was dropped a few years later) dedicated to ensuring that wild and native trout populations were allowed to thrive, as nature intended.

From the beginning, TU was guided by the principle that if we “take care of the fish, then the fishing will take care of itself.” And that principle was grounded in science. “One of our most important objectives is to develop programs and recommendations based on the very best information and thinking available,” said TU’s first president, Dr. Casey E. Westell Jr. “In all matters of trout management, we want to know that we are substantially correct, both morally and biologically.”

In 1962-63, TU prepared its first policy statement on wild trout, and persuaded the Michigan Department of Natural Resources to curtail “put-and-take” trout stocking and start managing for wild trout and healthy habitat. On the heels of that success, anglers quickly founded TU chapters in Illinois, Wisconsin, New York, and Pennsylvania.

From its hundreds of local stream restoration projects, to helping lead the way to remove the Edwards Dam on the Kennebec River in Maine, to compelling Congress to strengthen the Clean Water Act, TU has a strong 50 year track record of conservation achievements.  Perhaps TU’s greatest strength is that it works at multiple levels of society and government to achieve its mission.  From the landowner on the stream bank, to the state fisheries agency, to the Halls of Congress, TU is working to achieve its vision.

Today, the National Conservation Agenda of TU is set by the National Leadership Council, a body of TU volunteers and leaders from the grassroots.