Some define conservation as overseeing loss. Loss of wetlands; loss of open space; loss of water quality; loss of species. Aldo Leopold harkened to this when he wrote in the Sand County Almanac that “One of the penalties of an ecological education is that one lives alone in a world of wounds. Much of the damage inflicted on land is quite invisible to laymen. An ecologist must either harden his shell and make believe that the consequences of science are none of his business, or he must be the doctor who sees the marks of death in a community that believes itself well and does not want to be told otherwise.”

One of the things that Trout Unlimited does so well is to re-frame the question of overseeing loss to one of advancing recovery. Trout and salmon are remarkably resilient creatures. They have survived for millennia, and if given half a chance will respond to restoration. This fact makes a new tool developed by TU scientists and university, state and federal partners so exciting.

Almost every western native trout, and many forms of Pacific salmon and steelhead have been proposed or are listed for protection under the Endangered Species Act (ESA). The historic focus of the ESA is to keep species from becoming extinct. Because resources are so limited, when recovery efforts do occur they often lack the data necessary to evaluate extinction risks and the benefits of management activities based on quantitative information.

Thanks to a grant from NASA, TU scientists, working with universities and state and federal partners, developed a new method of looking across broad landscapes to make informed judgments about where extinction is likely to occur, and how to take concrete steps to improve the security of existing populations and, in some cases, enable successful reintroductions. 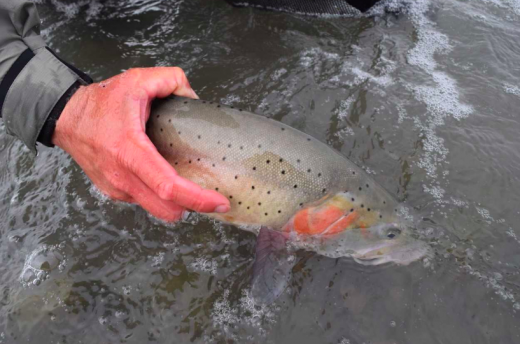 Lahonan cutthroat trout, listed as threatened under the Endangered Species Act, are coming back to their native watersheds thanks state-of-the-art techniques used by TU scientists to map and model suitable habitat.

The scientists aggregated 30 years worth of data on Lahontan cutthroat trout—a threatened species under the ESA—across all 211 streams where Lahontans exist, or historically existed, into a searchable database. They then developed advanced modeling and mapping techniques to 1) evaluate extinction risks for Lahontans in each occupied water; 2) evaluate the benefits of removing non-native trout from these streams; and 3) evaluate the likely success of reintroducing Lahontans into waters where they previously existed.

Importantly, they have developed a population simulator that allows partners with fish and wildlife agencies from Nevada, Oregon and California, the Forest Service, Bureau of Land Management, and the U.S. Fish and Wildlife Service to see the model results and explore impacts of various management actions in terms of how they decrease extinction risks. An equally broad array of partners is looking to use a similar recovery planning tool under development for Bonneville cutthroat trout and redband trout—two other imperiled native trout species.

The scientists call the new approach the Multiple Population Viability Analysis—MPVA. Its wonky name aside it is a game-changing innovation that will allow state and federal agencies and organizations such as TU to begin to think less about overseeing loss and more about recovering imperiled native trout species across broad landscapes. That is incredibly exciting and in keeping with the fact that conservation is not about overseeing loss. Conservation—the notion that we can take specific actions today to leave our children a healthier world—is the single most affirmative, optimistic idea that America ever gave the rest of the world.