The group at Wilderness Place Lodge.

“So, have you thought of your lede yet?”

Francesca, a retired PR specialist for the U.S. Air Force, turned to ask me as we waded through a shallow stream on our hike back to the lodge after a long afternoon of fishing.

Francesca and I were on a trip with eight other veterans and one active-duty military member created to show appreciation for their service. Since this group of individuals was obsessed with fish and the fishing in remote southcentral Alaska was hot this week, the trip was off to a bright start – despite persistent rain. I was lucky to get to tag along, and even luckier now that Francesca wanted to help me write my story. 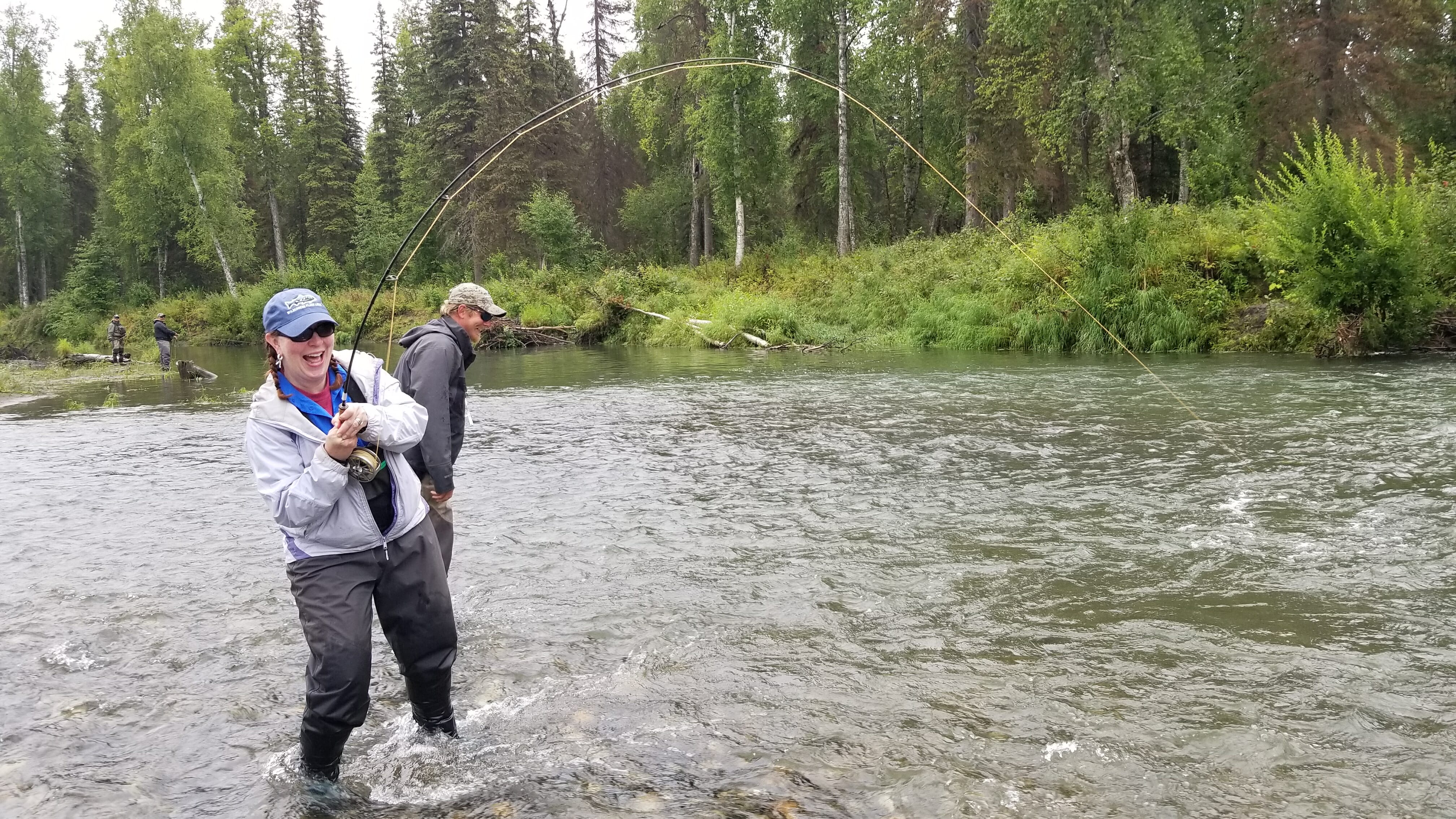 “The trip is a way to show appreciation for our military members and get them out to remote places in Alaska where they’d normally not be able to have such a peaceful long weekend,” said Anna Atchison of Kinross Gold, a co-sponsor along with Trout Unlimited.

Participants met at Anchorage’s Lake Hood Seaplane Base on Saturday morning, and eagerly loaded into both a De Havilland Beaver and Otter – classic Alaskan floatplanes that would carry them to a remote tributary of the Yentna River, a 45-minute plane ride northwest of Alaska’s largest city. 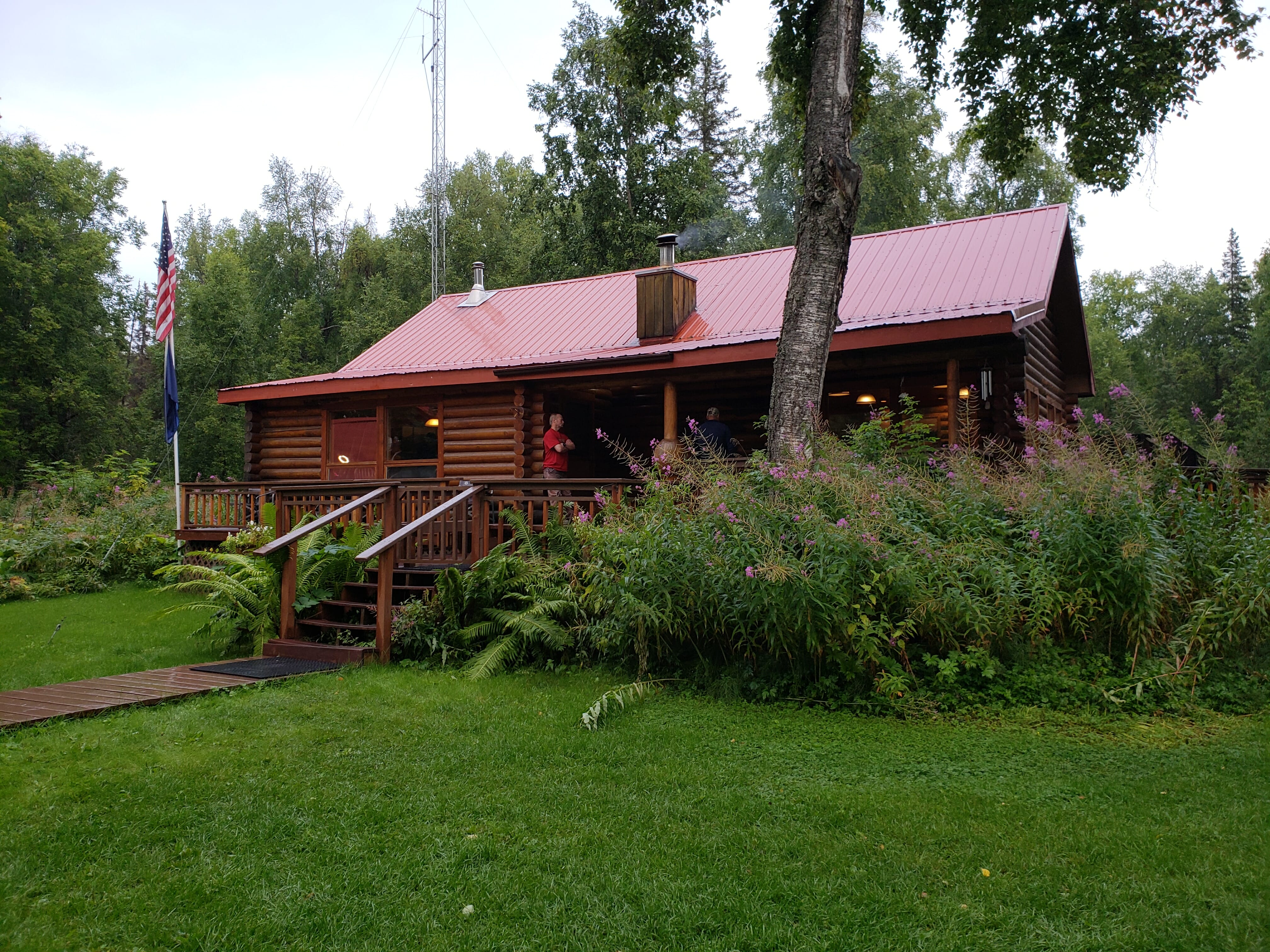 Within minutes, the concrete and buildings were behind us and we entered a landscape of trees, winding creeks, tundra, and wetlands with remote cabins dotting shorelines set miles apart from the next.

As we landed on the Yentna, guides from Wilderness Place Lodge met us on a sandbar to unload ourselves, our gear, and loads of food before the prior week’s guests of the lodge boarded the plane. They thanked the military members as they walked by, promising us we’d have a great time.

We hopped into boats for the short ride over to the lodge, where we were ushered through the front lawn that had grown tall with fireweed from Alaska’s long daylight, and given the overview once seated within the cozy log dining room. We were told the generators would turn off and thus there’d be no electricity between midnight and 5:00 a.m. (two toilet flushes, use wisely), and to communicate with the guides on fishing desires. That’s it. The rules were simple, and the directive was clear. We were there to relax, form community, and find healing and rehabilitation through the sport of fly fishing.

Some on the trip were after coho salmon for the freezer, some for rainbows, other just for the feel of the tug of whatever fish might bite their fly, which this time of year is a lot of large chum and pink salmon and the many rainbow trout and arctic grayling feeding off their eggs. The thing about fishing for salmon in Alaska, which we all soon learned (or re-learned) from experience, is that an angler is not only likely to experience “the tug,” it is often times likely to be BIG. 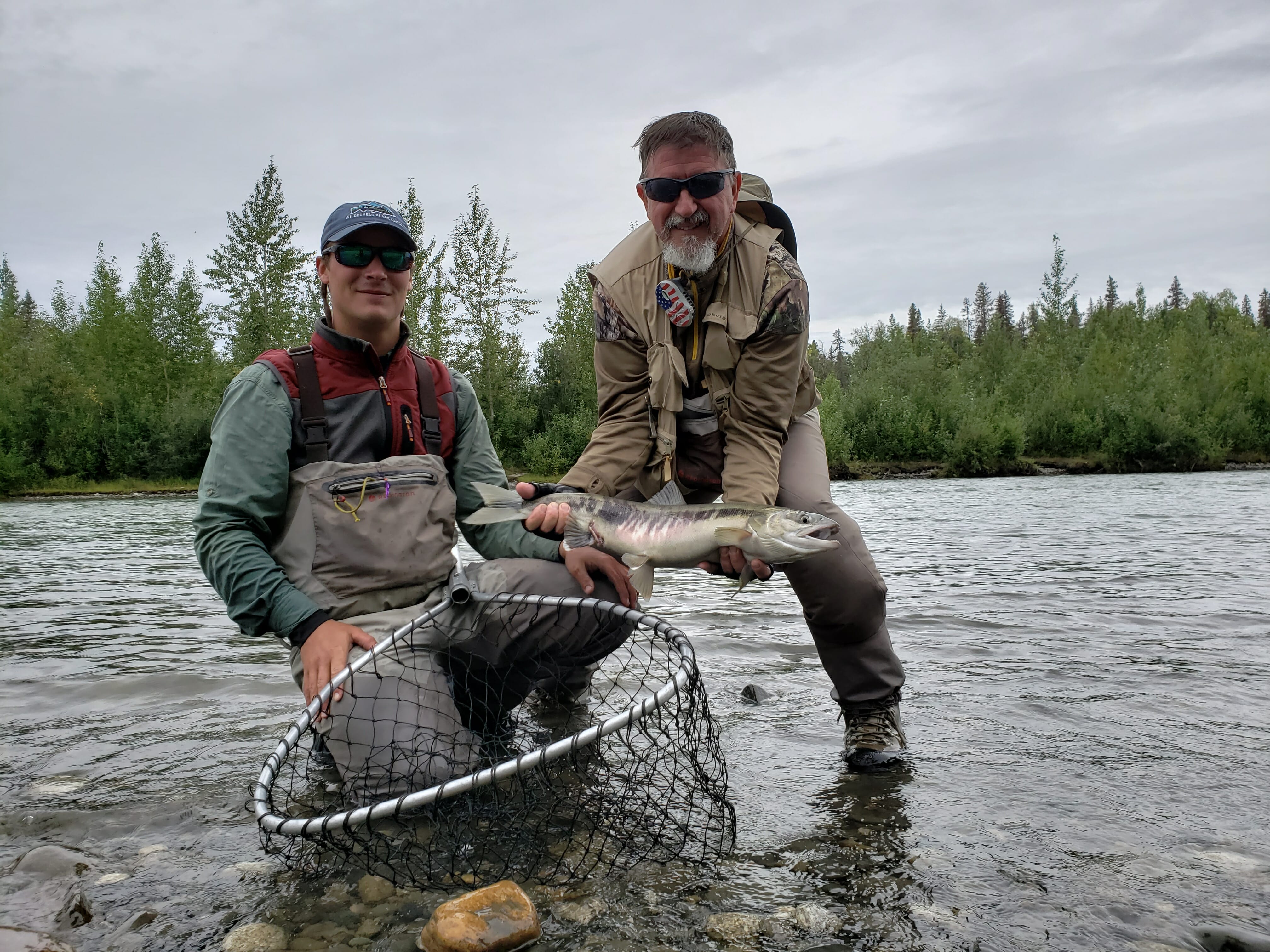 Though some fishing was available close to the lodge, most participants opted to hike out to Wilderness Place Lodge’s boats stashed about a mile and a half upstream. From there, the group divided up, a guide and two or three anglers in each boat, and rode farther upstream to find a run, pool or riffle to keep us entertained.

From reports over lunch the following two days, the guides chose their spots wisely. I was first paired with an Army Veteran named Dale and a young guide named Max. Dale and I caught one salmon after another at our first stop. Eventually, we loaded into the boat to find a new hole, more in search of a change in scenery than in search of a more productive spot. The second day with Manny, Sean, and Guide Triston proved to be no different, though slightly wetter from the unrelenting rain. 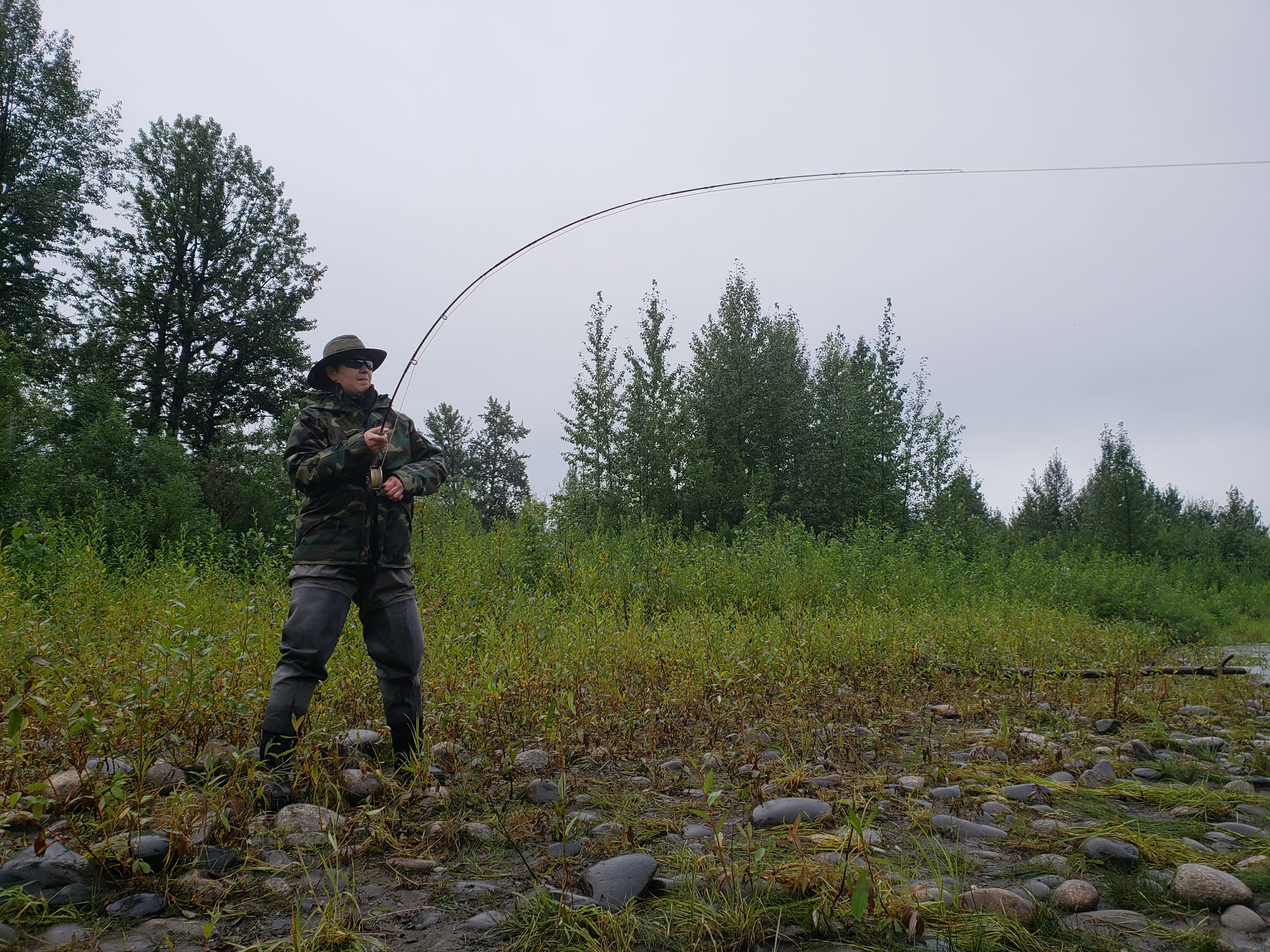 On our walk home after the second day, Francesca put in words a sentiment I’d heard described several times throughout the weekend. She called the trip something she’d “otherwise never be able to go on.” Many of the participants echoed this as they stood around the campfire warming up or hoping to ever so slightly dry off at lunch, though the break for lunch was only ever long enough to shove a sandwich wrap in their face before eagerly heading back to the water with their rod and reel. 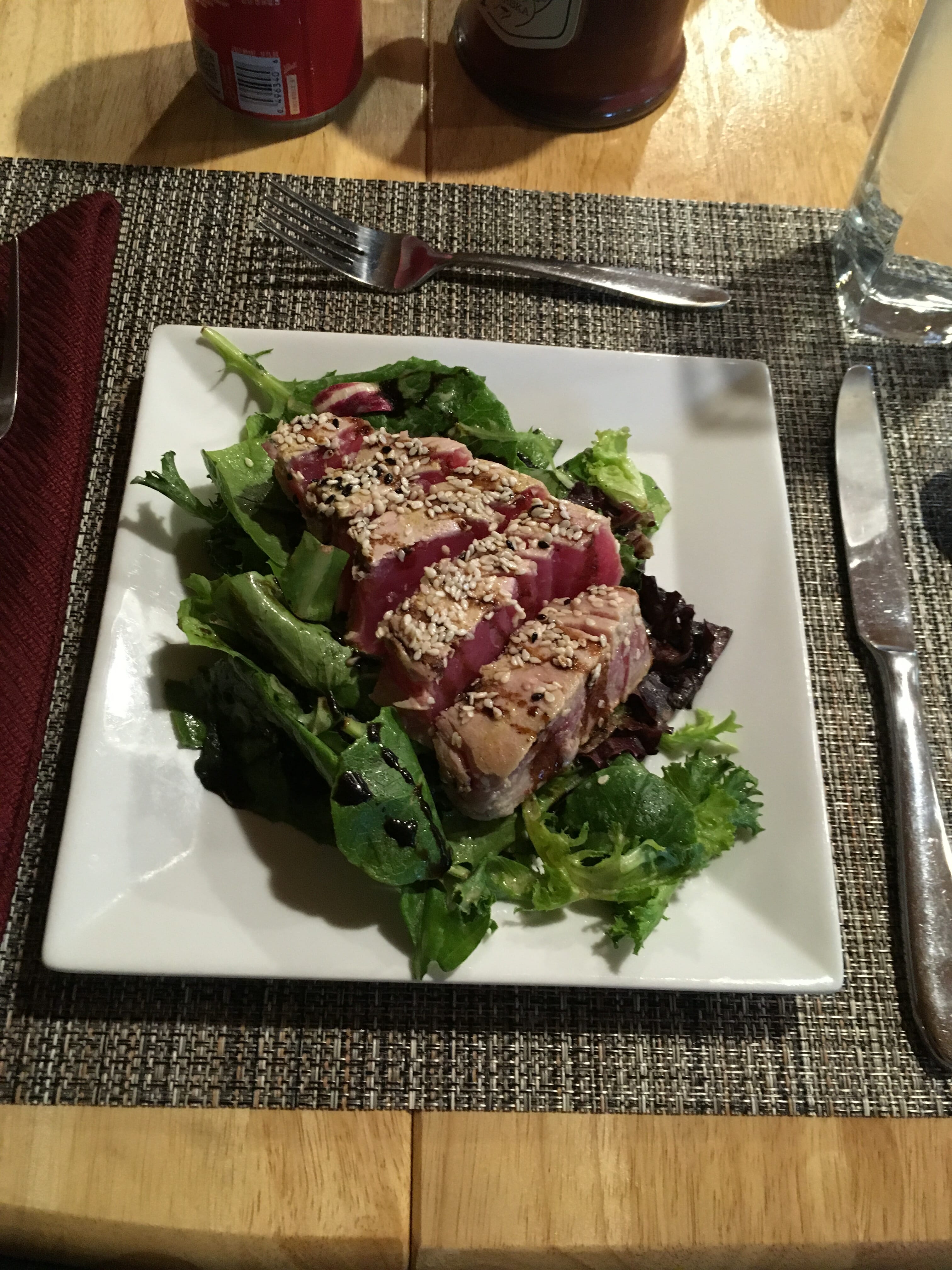 Both days, after a long hike that included a few river crossings and a full day of fishing in the rain, participants wearily loaded back into warm and comfort of Wilderness Place Lodge. Though happy hour had begun with our arrival, the group seemed more eager for hors d’oeuvres than they were for the bar. Over the next two hours, Chef Derek spoiled us with spreads of fresh salmon, giant Pacific prawns, home-made rolls, and various other dishes that were far from what you’d normally consume in bush Alaska without roads, vehicles, or grocery stores.

Throughout the meals and each day fishing, participants told stories from their time in service, using myriad acronyms and inside jokes that I could sparsely keep up. It was obvious that the group had made a series of life choices that had provided them with richness, gratitude for where they were presently, and many stories to tell.

With hope, this trip will be another positive one to look back on with lots of smiling photos of big fish to go along with it. 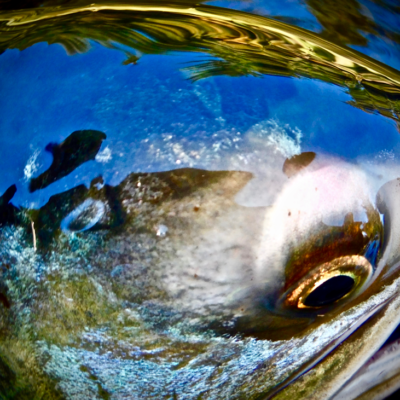 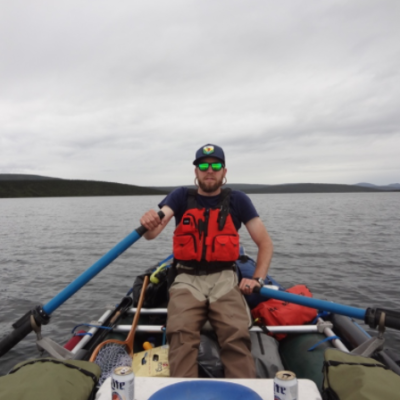 Voices from the River: Floating the Gulkana