Brook Trout and the Ghost of Henry David Thoreau

Henry David Thoreau has always had a mixed reputation here in Maine. Sure, he may have been a giant of American literature and patron saint of th

e environmental movement, but he got nervous when his Penobscot Indian guide left him alone at the campsite for 90 minutes, started a forest fire in Massachusetts, and somehow managed to get lost following a blazed trail across the Mud Pond Carry. Among registered Maine Guides, bashing Thoreau’s woodsmanship is a good way to entertain sports on slow fishing days—often while eating lunch at spot where Thoreau and his guides camped.

Still, we keep reading him. His three canoe trips to Maine covered a good portion of the best brook trout water in Maine. If you distill Thoreau’s The Maine Woods, the resulting liquor would smell strongly of wood smoke, moose, canoe (birch bark over cedar, sewn together with spruce roots), brook trout slime and a cold wind blowing off Mt. Katahdin.

The new Katahdin Area Woods and Waters National Monument, created by President Obama with an August 2016 Executive Order out of lands donated by Burt’s Bees founder Roxanne Quimby after more than a decade of sometimes contentious public discussion, protects much of the East Branch of the Penobscot River.

The East Branch was the wildest bit of whitewater Thoreau and his guides paddled, with smoky campsites on its banks lined with birch, cedar and spruce, its oxbow meanders full of feeding moose, all in the shadow of Katahdin. If you know where to look, the brook trout fishing can still be awfully good. Like Thoreau, you should probably hire a local guide if you want to find them. The good ones will find the easier portages around Haskell Rock, Grand Pitch and the Hulling Machine, know the springs that hold brook trout, and show you what’s left of Maine’s log driving history on the river banks.

The KAWW monument’s 87,000 acres along the East Branch–and the visitors who may follow in Thoreau’s wake—offer a new opportunity for local towns devastated by the recent closure of four pulp and paper mills. That’s why the Katahdin Region Chamber of Commerce and Patagonia founder and Maine native Yvon Chouinard are asking Maine Governor LePage to abandon his campaign against the monument and capitalize on a new opportunity to attract tourists to northern Maine.

For those of us at Trout Unlimited, it’s simpler. We spent more than a decade working with more partners than we can count to remove two dams to restore salmon on the Penobscot River. Those salmon swim past the removed dams to reach spawning grounds in the East Branch where they mingle with resident brook trout.

Altogether the new monument protects 20 miles of the East Branch of the Penobscot River, 10 miles of Wassataquoik Stream, seven miles of the Seboeis River, many miles of smaller tributary streams, and four ponds designated as “Heritage Brook Trout” waters by the state of Maine.

As a young man, Theodore Roosevelt, the father of the Antiquities Act, was deeply influenced by the region. In 1879 he embarked on a 40 mile trek through the wilderness to the summit of Mount Katahdin, a journey that included lands now part of the new national monument. It is fitting that the Antiquities Act – Roosevelt’s law – was used 137 years later to protect the country that tested the mettle of not only Thoreau, but the future president and conservationist.

The new monument is the northeast corner of a swath of conservation land, that, in combination with Baxter State Park, the Allagash Wilderness Waterway, several large parcels owned by the Maine Bureau of Public Lands, and lands and conservation easements held by the Nature Conservancy, the Appalachian Mountain Club, and the Forest Society of Maine, covers almost every inch Thoreau traveled by canoe.

Thoreau was, by all accounts, a cranky SOB. By Maine tradition he was a poor woodsman and a lousy travelling companion. But “in Wildness is the preservation of the world” has been a rallying cry for generations, and the landscape that inspired him to write it is now protected for all of us. Let’s keep it that way. 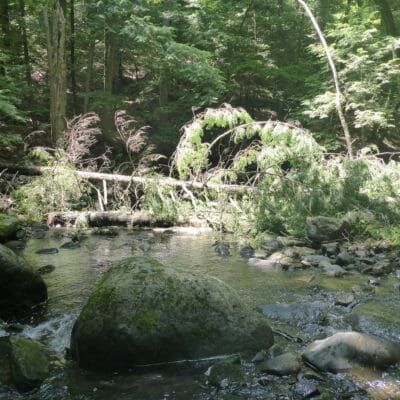 Highlights aplenty in New Hampshire in 2018