Pennsylvania boasts more than 86,000 miles of rivers, streams and creeks, second in the United States only to Alaska. That’s three-and-a-half trips around the earth. Thirty trips from Los Angeles to New York. It’s five times more than the 10 largest rivers in America—combined.

These 86,000 miles provide clean drinking water to Pennsylvania’s residents, water for crops and livestock, and recreation opportunities for boaters and paddlers. Perhaps most important for us at TU, they are home to no small number of wild trout.

We can’t protect those fisheries if we don’t know where they are, so since 2011, TU has been conducting stream surveys to document and protect unknown populations of wild trout in the state’s streams. This project, the Unassessed Waters Initiative (UWI) spearheaded by the Pennsylvania Fish & Boat Commission, has led to the discovery of wild trout in more than 40 percent of streams surveyed. Over the past year, Pennsylvania has protected more than 1,000 miles of newly identified wild trout streams.

Pennsylvania now has 15,000 miles of wild trout streams, including 2,000 miles of Class A waters, which have the largest populations. Counting linked upstream stretches, its wild trout protections cover more than 35,000 stream miles.

Locating these populations is critical given the ongoing natural gas boom in the Marcellus shale region. More than 10,000 natural gas wells have been “fracked” in the Keystone State over the past decade. As many as 25,000 miles of new pipelines could be built in the state by 2030. The projected development of the shale fields would require hundreds of stream crossings and disturb tens of thousands of acres of forests — many of which contain the headwater streams wild trout call home.

Deforestation and construction leads to increased sedimentation in streams, erosion on stream banks, and rising water temperatures, all of which are detrimental to critical trout habitat. Pennsylvania’s Wild Trout Water designation affords these streams additional protections under state regulations.

For more information on how you can get involved in these efforts, contact David Kinney, Mid-Atlantic Policy Director, at dkinney@tu.org, or Rob Shane, Mid-Atlantic Organizer, at rshane@tu.org. 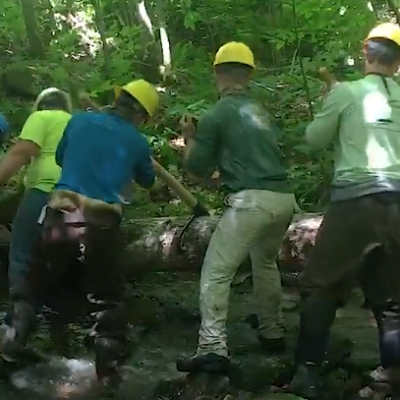 Video spotlight: Stories from the Fountain