In 2006, the Pajaro River on California’s central coast came out of obscurity to make national headline—for the wrong reason: it was named the most endangered river in America.

Historically, the Pajaro was one of the most productive steelhead streams in this region. Old timers in Watsonville and other local communities recall chromers stacked like cord wood in the holding water as they came in after winter storms blew open the sandbars at the river mouths.

But water diversions, widespread habitat loss and degradation, and drought reduced this river’s once robust run of wild steelhead to a shadow of its former self.

Local fish advocates, led by the indefatigable Herman Garcia and his group Coastal Habitat Education and Environmental Restoration (CHEER), sprang into action. By 2006, Garcia and CHEER already had been working for a decade to keep the Pajaro’s dwindling steelhead run alive, through fish rescues and work with landowners to restore aquatic and riparian habitat.

The Pajaro might seem an unlikely place to invest in bringing back the iconic freshwater sport fish of the Pacific Northwest. Much of the river is bordered by fields of row crops. Its last few miles are now characterized by homeless encampments and large levees.

Only in the uppermost headwaters do you find the kind of habitat that inveterate steelhead anglers might associate with productive steelhead streams: towering redwoods, firs and maples, freestone creeks, and good substrate in the stream channel. But even here, thirsty residential development combined with drought has diminished the summer streamflows young steelhead need to survive. Good Neighbors — Little Arthur Creek, a new video from Trout Unlimited shows that, despite the river’s many challenges, the potential for successful habitat restoration in the Pajaro is strong. That’s because in 2009 TU, CHEER, and the Center for Ecosystem Management and Restoration (CEMAR) teamed up to “think big and start small” in restoring steelhead habitat in the Pajaro.

It’s also because the watershed has another critical ingredient for restoration success: landowners willing to work in partnership with groups like TU and CHEER to keep more water in-stream during the dry season.

TU’s new video, Good Neighbors: Sharing water with steelhead on Little Arthur Creek, illustrates the power of these partnerships to make modest changes in water use and storage that have big ecological benefits.

This short film tells the story of a landowner-and that of Garcia, who grew up camping, fishing, and hunting on Little Arthur Creek-and how they came together with TU’s California Water Attorney Matt Clifford and our other project partners to start restoring the summer streamflows that will make this key Pajaro River tributary once again a good place for steelhead to spawn and rear.

The Pajaro River has a long way to go before it is a viable steelhead fishery again. But as this new video highlights, starting small while thinking big can make a real difference for steelhead in California coastal streams-and for the people who live next to them.

The Little Arthur Creek Residential Storage and Forbearance Project, and this film, were made possible by the following partners:

Sam Davidson is director of communications for Trout Unlimited in California and the Klamath Basin. 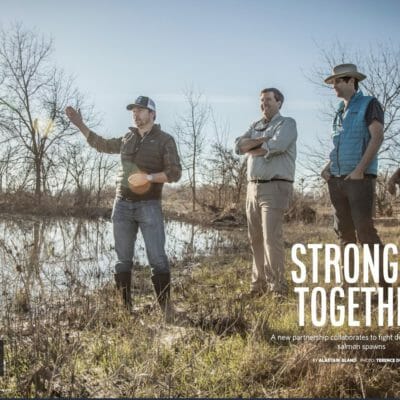 Reconciliation for fish and people in California’s Central Valley