Among the many thoughts running through my mind while traipsing though the wilds is one that does more than the others to clear out the chaos and clutter of every day life.

“Am I the first human to stand in this place?”

The fact I am even pondering the possibility means I have reached my destination. By now my mind is focused on more important things and my spirit has found its way out from behind the shadow of my doubts. I am free.

But back to the question.

I tell myself I am likely the first human to stand in that exact spot and soak up the vivid scenery surrounding the location, but reality usually sinks in as I realize the chances of this being the case are not as great as I would hope. This fact is sometimes harshly pointed out by the discovery of a nearby fire ring and several remnant Pork and Beans cans.

So, arguably, I might be the first person to take up space in that exact spot on the planet, but there are other firsts no one can argue about.

I can guarantee them because I was there when they happened; this is my definition of a special place.

For me, and countless others living within 150 or so miles of the northeast corner of Utah and southwest Wyoming, that place is the Uinta Mountains.

I attempted to create a list of all the firsts in my life that happened in the Uintas, but quickly realized it would take the rest of my life to complete it because they are still happening. Now that’s special.

The first of the firsts, at least that I can remember, involves my first, but certainly not last occurrence, of crying over a fish. This was for an entirely different reason than it evolved into over the years.

I was fishing with my dad and brother on a small stream not far off of the Mirror Lake Highway, which connects the towns of Kamas, Utah, and Evanston, Wyoming, through the Uintas. I watched as my dad drifted a small clump of fake salmon eggs through a likely holding area for fish. He did this several times before asking me to hold the rod while he took my brother to water a dry spot. 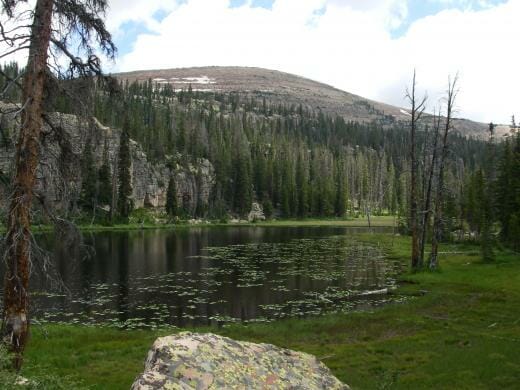 I was about 5-years-old and very focused on doing things exactly how I had seen my father do them. I was in a bit of a trance, and totally unprepared, when a trout raced out of cover to look at the bait. I jumped in reaction and spooked the fish back into hiding. My heart still races when I think about that moment, the first time I realized the thrill of fishing. The crying came later when my dad caught a fish out of that very spot.

My brother and I created a special holding pond for the 10-inch fish and kept an eye on it while my dad continued to fish. Eventually dad decided it was time to move on and instead of returning our new friend to the stream he conked it on the head and put it in his basket. We could have filled the pond our friend had just been swimming in with our tears.

The tears had dried by dinner and I suddenly didn’t mind the lack of catch and release fishing. I can’t fathom how many fish the waters of the Uintas have produced for me in the years since. I still keep planters and nonnatives for dinner, but let the vast majority of fish, particularly natives, go.

The Uinta Mountain are unique in that the range runs east-to-west instead of north-to-south. Most North American mountain run north-to-south. The Uintas are home to Kings Peak, the highest point in Utah at 13,258 feet above sea level. The mountain range is also the location of Utah’s largest wilderness area, by far. Created in 1984, the High Uintas Wilderness is comprised of 453,900 acres and lined with 545 miles of hiking trails. The wilderness area is accessed via 16 trailheads located off the Mirror Lake Highway and Forest Service roads.

The Uintas are dotted with roughly 1,000 lakes or ponds and more than 400 miles of streams. More than 600 of the stillwaters support fish. The others are too shallow for fish to survive the winter. 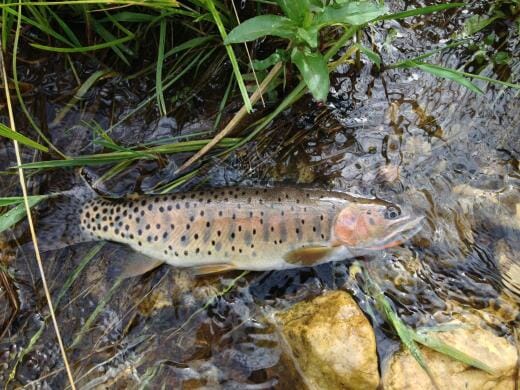 Utah officials are working towards breaking another group of cutthroat away from the Bonneville. The Bear River cutthroat are found in the Bear River on the north side of the Uintas.

The highcountry of the Uintas is typically not accessible to hikers until late June (depending on the snow depth, of course). Many anglers try to time trips so they are the first people to reach popular fishing destinations as the ice is coming off the lake. They are typically rewarded with great fishing.

Not all the fishing requires a backpack and hiking boots. Many anglers head for lakes and streams along the Mirror Lake Highway. They often offer good fishing for planted trout and are easy day trip destinations for families aching to get in the mountains.

Many people enjoy camping in the Uintas. Dispersed camping is allowed, as long as you follow Forest Service rules, but there are also developed and primitive campgrounds, as well as a handful of lodge-type destinations available.

There are numerous day hikes which lead to backcountry fishing opportunities. Some brave souls head out for weeks at a time. I bet they eat a few fish along the way for a little extra protein.

Fishing may have been the reason for my first visit to the Uintas, and it remains the point of most of my trips, but it is obvious this amazing range is a special place for outdoor enthusiasts with a wide variety of interests. Brett Prettyman is the communications director for Trout Unlimited’s Intermountain Region. He lives and works in Salt Lake City.