A Dolly Varden in southeast Alaska, caught on a tenkara rod.
By Randy Scholfield
Boulder, Colorado, thinks differently. While at times mocked for its free-range ideas and hemp-fueled lifestyles, there’s no doubt the “People’s Republic” is booming as a hub for creative entrepreneurs and independent thinkers. Oh yeah—it doesn’t hurt that Boulder is surrounded by world-class outdoor opportunities, from rock climbing to trail running to fly-fishing.
So it’s no surprise, perhaps, that Boulder has proved to be fertile ground for planting tenkara, the traditional Japanese fly-fishing method centered around a simple telescopic fly rod and attached line.
Tenkara gets back to basics: Think cane pole with fly. No reel. No multiple fly boxes. No split shot or floatant or strike indicators or other assorted accessories and gewgaws that, in the eyes of some, clutter up the sport while draining our wallets.
Tenkara’s “one pole, one line, one fly” vision of angling simplicity is drawing an increasing number of American adherents. Initially dismissed by some in the fly-fishing community as a “fad,” tenkara has experienced slow and steady growth to take its place as a viable alternative to Western style fly-fishing.
But transplanting a Japanese tradition to American soil has sparked a fascinating and (mostly) friendly debate about the role of tradition and innovation in fly-fishing. 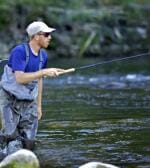 alt=”” title=”” />Daniel Galhardo, a soft-spoken 30-something who looks younger than his years, is credited with introducing tenkara to the American angler. On a trip to Japan in 2008, he wanted to fly-fish and discovered tenkara—and soon ditched his international banking ambitions to become a missionary for tenkara in America.
“Tenkara showed me that there was a different way to think about fly-fishing,” he said recently. Under the tutelage of tenkara masters such as Dr. Hisao Ishigaki, Daniel learned to think more in terms of simplicity and technique, rather than hardware and technical advantages.
The rods were simple, elegant, easy to transport and quick to set up. In 2009, he started a company, TenkaraUSA, with the aim of introducing tenkara fishing to the U.S. market.
It didn’t catch fire right away. Using one fly “is a hard concept for Americans,” Galhardo admits. “We’re trained to match the hatch and constantly change flies. But if you know how to present properly, you might not need to do that,” he learned.
In 2010, Daniel (then living in the Bay Area) paid a visit to the Boulder area to fish tenkara with fly-fishing authors John Gierach and Ed Engle. They took to tenkara—and Daniel took to the Boulder area, in a big way.
“I immediately called my wife and said, ‘We have to move here.’” They made the move in 2012, helping put Boulder (and Colorado) on the map as a hub for tenkara enthusiasts, guides and businesses.
Why Boulder? He points out that the area offers world-class climbing as well as excellent fishing—the best of both worlds for someone like him who is passionate about both pursuits. Tenkara, with its light line and extended reach for drag-free drifts, “is hands-down the best way to fish the kind of mountain streams found in Colorado and throughout the Rockies.” (He notes that it’s perfect for the Sierras and Appalachian Mountain streams, too.)
He liked that Boulder attracts people who are open-minded and interested in exploring different alternatives. Moreover, Boulder was home to a growing number of outdoor companies and had a thriving start-up scene. He’s enjoyed a “big-time dialogue” with like-minded entrepreneurs in the area.
Galhardo sees his role as transmitting a distinct tradition. “I’m a storyteller,” he says. He wants to introduce American anglers to tenkara fishing as it has been practiced for ages in Japan.
“I’m not interested in reinventing the wheel,” he says. “Tenkara is simple and effective—it’s the way it’s been done for hundreds of years in Japan. It works.”
Galhardo insists he’s not a traditionalist for tradition’s sake. He is not wedded, for instance, to using Japanese terms and names. He acknowledges that there are different ways to interpret “true” tenkara. And he welcomes the competition from the growing number of American tenkara businesses—a sign of health in the emerging market.
That said, “Somebody should really know what tenkara is before making adaptations to it,” he says, a bit of impatience in his voice. “I get a little frustrated with people who use the tenkara name without understanding the tradition.”
For instance, he notes, a key feature of tenkara rods is their light and elegant touch, allowing for easy casting. At some point, if the rod design is too heavy, “you cast 20 times and your arm gets tired. Can you call that tenkara?”
Taking tenkara for a spin
Others are not shy about giving tenkara a decidedly American spin.
Karin Miller is the blonde dynamo behind Zen Tenkara, a company based in nearby Loveland. She discovered Tenkara in 2010 and has never looked back. “The fixed-line system just struck a chord for me—it was just so simple,” she told me. 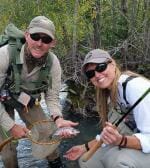 alt=”” title=”” />In 2012, she and her then-husband started Zen Tenkara with the idea of “selling a few rods out of the back of our car.” She took Galhardo’s move that same year to Boulder as an encouraging sign of momentum for tenkara.
Miller admits she’s less of a purist on tradition than Daniel, who is deeply interested in Japanese culture and the tenkara tradition as practiced in Japan. She has never been to Japan, and doesn’t have much interest in going there.
Early on, she ran into a buzzsaw of criticism from some tenkara purists over Zen’s unorthodox rod offerings. Her Baichi rod (which Zen no longer offers) was, in her own words, “stiff and thick.” That wasn’t an accident—the idea was to offer it as a Czech-style nymphing rod. Because—why not?
“We angered a lot of people in the beginning,” she admits, smiling. “I got into a lot of heated dialogue with people. They were just close-minded. We’ve been doing our own thing—our philosophy is, ‘Look, we’re not in Japan, we have in America diverse specs and diverse waters.”
She pauses. “I just trusted that, at some point, the tenkara community would catch up and see the potential.”
The community is changing, she said. “A few years ago, there were a lot of purists attracted to Japanese culture.” Today, a lot of her customers just want a new fishing experience or want the convenience of tenkara for mountain biking and backpacking.
Miller says she has a great respect for tenkara tradition, but she’s also intent on adapting it to American soil. That’s a very American impulse: borrow, innovate—and make it our own. Think pizza, she says.
But how far to go in pushing the envelope on tradition? At what point does it stop being tenkara?
“There’s an evolutionary process to everything we use,” she told me. “We learn a lot from tradition. If there’s something that’s survived a long period of time—it’s for a reason and you have to respect that. But if you close your eyes to other options, you can miss a lot of opportunities. What else can be done? How can we make it even better? It’s about making it your own.”
She added, “We’ve been trying to push limits and build rods to our specs that will work on our waters and conditions here in the States.”
Miller is now working on what will be the first American-designed and built Tenkara rod. Still in research and development, the rod will be, she predicts, a “game-changer.” She and fellow Tenkara enthusiast and guide Paul Vertrees have been tweaking the design for more than a year. At present, Zen’s rods are all carbon-fiber. But after testing materials for the American rod project, they decided to go back to the future with fiberglass, which she found “lighter, stronger, faster” and more in line with her vision of a 12- to 13-foot Tenkara rod that is “an extension of your hand—you feel everything on that line.”
She seconds Daniel about how Tenkara is a perfect fit for Colorado’s mountain streams. But she’s all about experimenting and pushing Tenkara rods to the limit in places like the Florida Keys—where, on a recent trip, she was landing small sharks and tarpon on a heavier tenkara rod tricked out with a 35-foot line and big streamers. To her surprise, the rods were up to the challenge. And it was a hoot.
It’s about having fun, she insists—and trying something new.
How tenkara will evolve in America is anyone’s guess. But it’s firmly taken root here in Colorado, with a mixture of tradition and ingenuity that’s created a new experience in fly-fishing.
Five tips for tenkara fly-fishing
Daniel Galhardo, founder/CEO of TenkaraUSA, offers these tips for simple fly-fishing with tenkara: 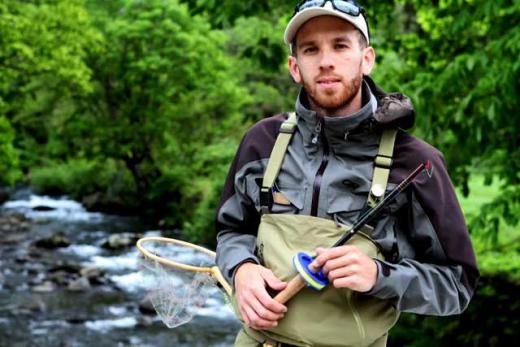