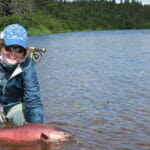 Students from the University of Georgia during filming of “Pick the Dang Stuff Up!”. Courtesy photo.

A strong conservation ethic runs deep among the students and faculty at the University of Georgia, particularly within the fly-fishing community. So, when Trout Unlimited recently launched our inaugural “Trout Week” celebration as part of our annual meeting, the TU Costa 5 Rivers club at UGA 5 jumped into action.

The club partnered with TU staff and the Upper Chattahoochee Chapter of TU (UCCTU) to kick off a national #CleanMyWater sweepstakes as part of Trout Week. The Clean My Water initiative was founded by UCCTU in 2018 to engage anglers (most of whom already pick up trash when they are out on the water) in a social media movement that anyone could join. Since the campaign started people from 41 states have participated.

During its pilot year, Clean My Water gained momentum around the Atlanta area and quickly spread to other TU chapters in the southeast. Leaders from UCCTU, along with TU staffer Jeff Wright, could see that TU Costa 5 Rivers clubs would be logical adopters of Clean My Water, and UGA seemed a great place to start. With that in mind, the UGA club helped film a Clean My Water promo, urging others to “Pick the Dang Stuff Up!”

During Trout Week, the UGA club developed a nationwide social media contest around Clean My Water. The students and their beloved advisor, Dr. Jay Shelton, took a creative but straightforward approach to the contest’s theme: clean up our favorite rivers, lakes, and streams so that everyone can enjoy safer, litter-free time in the outdoors.

“We wanted to get involved with the Clean My Water project to enact tangible change in the waterways of Georgia,” said Ben Comfort, president of the UGA 5 Rivers club. “Unfortunately it is hard to find streams these days where there is no trash or evidence of human degradation, and that is why initiatives like these are important, so people can see the impact they are having on the environment and then have an opportunity to change that in a positive way.”

Prizes from Costa, Yeti, Simms, Sage, and Sea Run Case attracted daily entries on a national scale, and outdoor enthusiasts and anglers filled nets, bags, truck beds, and dumpsters with trash from community waters. Thanks to encouragement from the UGA crew, clubs at other 5 Rivers campuses planned similar clean-up events, getting new anglers and members involved along the way. From California to New York, Utah to Alabama, college anglers followed the lead of their UGA peers and set out to “Pick the Dang Stuff Up!”

The success of the 2021 Clean My Water sweepstakes is a testament to what we can accomplish when united in our stewardship of rivers and streams. A big Trout Week shout out and thanks to those who made this year’s Clean My Water contest super fun and impactful: UCCTU, including Bruce Payne; Dr. Jay Shelton and UGA club members Emily Rogers, Guy Eroh, Ben Comfort, Elijah Dwoskin, and Preston Ni; our friends at Fly Lords, LLC, specifically Joseph Berney–dedicated UGA 5 Rivers alum and account manager at Fly Lords.

Libby Glaser is the the TU 5 Rivers Costa coordinator for Trout Unlimited.