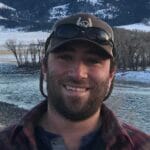 You would think after several decades and several failed attempts that water speculators would get the hint: people in Colorado’s San Luis Valley want to keep their water where it is.

Yet, it seems every few years there is a renewed attempt to divert water from the valley’s fertile alfalfa and potato fields and sell it to urban and suburban communities at a premium. These schemes present a raw deal for farmers, rural economies and fish and wildlife. It seems the only ones who would benefit are the exporters themselves. As anglers, we need to join with the numerous water districts, municipalities, conservation organizations and agriculture groups that stand in opposition to an ill-conceived project that would take water from the valley an pipe it to the Front Range.

Colorado’s high mountain peaks and resort towns tend to get most of the attention, but the San Luis Valley is a special place largely untouched by the rampant tourism and development seen in other parts of the state. Bounded on the west by the San Juan Mountains and by the Sangre de Cristos to the east, the region is home to more than 1.8 million acres of public land that includes Great Sand Dunes National Park, three national wildlife refuges, the Rio Grande Natural Area, and the Rio Grande National Forest. It is also home to a strong farming and ranching economy that was started by Hispanic settlers well before the founding of the United States.

Colorado’s Front Range communities like Castle Rock and Aurora have been booming in recent years and show no signs of slowing down. This rapid population growth has fueled the need for an ever-increasing supply of water despite the region’s already limited water resources. Compounding this water scarcity problem are the growing threats of climate change and prolonged drought.

A company called Renewable Water Resources has presented a plan to drill 14 new wells just north of the Baca National Wildlife Refuge in the San Luis Valley. The company intends to build a $600 million pipeline over Poncha Pass to pump 22,000 acre-feet of water per year to reservoirs that supply suburban Front Range communities. If completed, the diversion would have devastating impacts on fish and wildlife habitat in the San Luis Valley, hollow out the region’s natural resource-based economy, and potentially impact the ability of local farmers to grow crops. Moreover, this plan will place immense strain on an already precarious groundwater supply and reduce the incentive for suburban areas to decrease water consumption, leading to even more poorly planned growth and development.

The San Luis Valley averages only 7.5 inches of precipitation per year, about a third to a half of what most of the Front Range receives. As snow melts in the foothills surrounding the valley, it seeps into the ground where it collects in one of two major underground aquifers. This project would pump water from the deeper of these two aquifers, which will in turn reduce water quantity in the shallow aquifer as well as surface streams. Impacted surface waters would include San Luis Creek and streams draining the Sangre de Cristos near Crestone, which supply water to critical fish and wildlife habitat on the Baca National Wildlife Refuge. Further, there are currently no available surface water rights in San Luis Creek that could compensate for this impact to an already degraded stream. The current groundwater use in the Rio Grande is already unsustainable; placing new pressure on this resource threatens to destroy an already fragile ecosystem and the communities that are inextricably linked to it.

If you live in Colorado, you can help stop this threat before it gains any more momentum. Contact Gov. Polis’ office or members of the Colorado General Assembly expressing your opposition to exporting water from the San Luis Valley. For more information, visit https://www.protectsanluisvalleywater.com/