Way back up in the swamp … 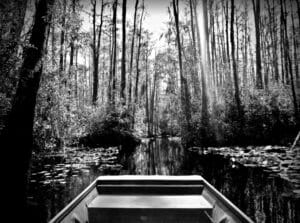 The little yellow ‘bugger landed with an appreciative thunk just along the edges of the lily pads. Mere days from blooming and popping with brilliant yellow flowers, the plants nonetheless created bright green raft atop the dark water, lining the squishy banks of the swamp and providing plenty of hiding places for the fish below.

Still early spring, even in southern Georgia, the Okefenokee National Wildlife Refuge’s heralded panfish hadn’t started biting with any zest yet. Nor had its pickerel. But another predator was awake after a chilly spring, and it might offer the most fun a fly fisher can have on the swamp while keeping an eye out for some of its 12,000 alligators.

The bowfin is an underappreciated dark-water denizen—a prehistoric relic much like the alligators with which it shares this 400,000-acre watery wilderness. Disdainfully called “mudfish” by many, this holdover from the Jurassic and Eocene periods is a true dinosaur.

I let the weighted bugger sink to the shallow bottom of the blackwater swamp—the entire basin is a massive bird-bath that catches rainwater, filters it through tannic vegetation and peat and then discharges it very slowly south and west to the Gulf of Mexico out of the Suwanee River and east to the Atlantic out of the St. Mary’s River. I lost sight of the fly just inches below the surface of the coffee-colored water, and waited for a five-count before the first subtle strip. Not too fast and not too slow, but … deliberate.

The “old boy” at the boat basin where I picked up my rented jon boat was quick to give me advice in that patented south-Georgia drawl.

“Hell, man,” he said. “Anywhere you throw that fly, you ought to catch a damn mudfish. They’re really on the feed. And they like yellow. That’s the color.”

While the swamp’s other fish are a bit more heralded—it’s warmouth and flyers are downright famous—the “mudfish” is likely the Okefenokee’s most ferocious. It lies in wait under cypress knees, moss-laden branches, floating mats of elevated peat and, of course, lily pads. Sporting a predatorial head and rows of small, sharp teeth, it’s hell on light tippet. It looks like any number of mean-as-hell ambush feeders, from the invasive snakehead (no, they’re not related) to the deep-water burbot of the Arctic, and it fights with abandon.

On the third strip, the line pulled tight and the fish screamed from the black bottom of the swamp and erupted into the sultry southern sky. I let out a very appreciative, “Holy shit,” strip-set the fly and held on through more aerials and rolls and watery tumbles. Moments later, I was prying the ‘bugger from the toothy jaws of a 3-pound bowfin with a set of fishing pliers. In one cast, the fish turned a perfectly serviceable size 8 fly into a yellow-ish pulp.

I broke the ‘bugger off and tied on a yellow Clouser. It lasted until just past lunch, leaving me plenty appreciative. A new fish for me, I found the bowfin—one fellow angler at the boat launch said to just tell everyone I was catching “cypress trout”—to be a fine fly rod target, and one worth chasing. And it’s not often targeted in the South simply because, try as they might, nobody’s figured out how to make them truly edible. My dependable buddy at the boat launch told me it was possible to grind them up and make “fish balls” out of them, but even then, they’re barely worth the effort.

“You can run a knife along the scales when you’re cleaning ‘em, and it just comes off black,” he said. “I think that’s why we call ‘em mudfish.” 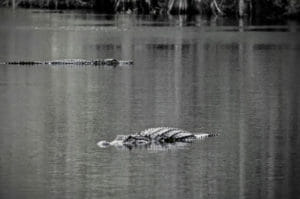 They are a unique fish—the last of their kind, truly. While they are most closely related to gar, they are the only surviving species of the order Amiiformes. Like gar and other similar fish worldwide, such the arapaima of the Amazon basin and the snakeheads native to Asia and Africa, the bowfin can breathe air. This is particularly noteworthy in waters like the Okefenokee, where, thanks to the tannic nature of the water, the acid levels are quite high. This means, in low-water years and, particularly in high summer, the swamp’s waters can be very low in dissolved oxygen. This is why the swamp isn’t great habitat for more traditional southern game fish like largemouth bass. There are some in the Okefenokee, but they’re not nearly as plentiful as the bowfin.

And that’s OK. In fact, it’s kind of a cool to know that the native fish in the swamp—and the bowfin is certainly native—are perfectly adapted to their prehistoric landscape, much like the gators, the snakes, turtles and other reptiles and amphibians. I spent an afternoon with Susan Heisey, the refuge’s supervisory ranger, and, she explained, apart from some minor noxious plant invasions, the Okefenokee is remarkably intact. And the bowfin are part of that.

“This is a pretty special place,” Heisey said, as we drove around the eastern edges of the swamp in what she calls the “uplands,” or the very slightly elevated “sill” of the swamp. “I’m pretty lucky to get to work here.”

As I released that first bowfin into the dark water, I looked up only to see three v-shaped wakes heading right toward me. Alligators, and couple of them pretty big. As Heisey told me, they’re very opportunistic and have been known to take fish right off of anglers’ lines. Sitting in the stern of the little jon boat, separated from the water by a thin layer of aluminum, I was a bit unnerved by the attention my first fish had attracted. 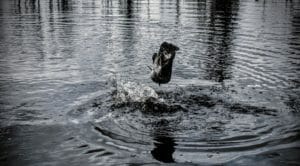 But it was also good to know that, since the refuge was created in 1937 by President Franklin D. Roosevelt (those Roosevelts did good things for us anglers, didn’t they?) there has not been a single recorded alligator attack on a human. That’s mind-blowing, considering how many gators I saw, ranging from 10-footers with piercing eyes to little 2-footers that tended get really close to the boat when the fishing was good.

Of course, I considered the adjective in that claim. Recorded. I kept my hands and arms inside the boat at all times.

And Heisey is right. It is, indeed, special. And I consider myself lucky to have fished it.

Chris Hunt is the national digital director of TROUT Media. He lives and works in Idaho Falls. This piece first appeared in Hatch Magazine.