In the early morning hours Saturday, Congress stepped up to protect one of America’s most historic watersheds.

The Delaware River Basin Conservation Act, first introduced in 2010 and long a priority for Trout Unlimited and our partners in the region, finally cleared both the House and Senate as a provision of the Water Infrastructure Improvements Act for the Nation.

We at TU know the Delaware River, with its heavy, hard-fighting wild trout, as home to some of the best—and most storied—fly-fishing water in the East. Anglers travel from near and far to fish the river, named as one of Trout Unlimited’s 100 Trout Streams in America.

Trout fishing is just a part of the river’s value. The Basin, stretching from the Catskills to the Delaware Bay, also provides clean drinking water to more than 15 million people, offers world-class hunting, boating, birding, and tourism, and pours $25 billion into the region’s economy.

But the basin faces a number of pressing threats, from stormwater and fertilizer runoff to climate change. The new program makes the Delaware River a national priority, and answers the need for a concerted restoration effort in the basin, something on par with work underway in the Chesapeake Bay, the Great Lakes, and other major U.S. watersheds. 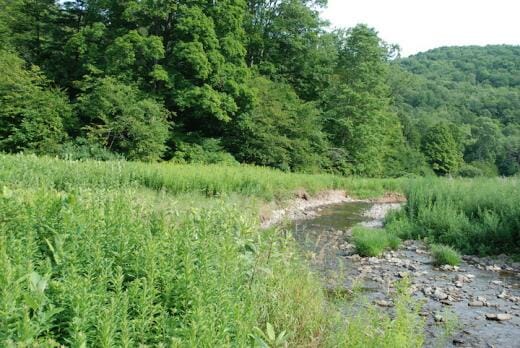 A stream restoration project on Sands Creek, an important Delaware River tributary, is an example of the fine work Trout Unlimited is doing in the Delaware River Basin.

The act creates a Delaware River Basin Restoration Program to identify, coordinate, and prioritize the array of conservation efforts in the basin, and to provide technical assistance and competitive matching grants to fund the sort of on-the-ground work that groups like Trout Unlimited are doing in the watershed — whether it is replacing poorly designed culverts , planting new riparian buffers , or restoring in-stream fish habitat .

The program, which will be administered by the U.S. Fish and Wildlife Service, will help watershed organizations set smart priorities and make our efforts more effective and efficient.

We applaud the senators and representatives in the region who pushed for DRBCA’s inclusion in the water bill this fall. And we thank the many TU members and other concerned citizens who have spoken out in support of the DRBCA.

Among their efforts over the past two years, TU volunteers have traveled to Washington DC to meet with legislators and their staffs to discuss the DRBCA, they have attended a roundtable discussion with Rep. Ryan Costello (R-Pa.), and 20 chapter presidents and council chairs signed a TU letter to House and Senate leaders supporting the DRBCA. This fall, hundreds of TU members responded to a TU action alert and sent letters to their senators and congressmen.

That kind of effort will continue in the coming months as Trout Unlimited will work with our partners to ensure that Congress gives the Fish and Wildlife Service the funds it needs to get the program off the ground.

The WIIN Act also included reauthorization of the Great Lakes Restoration Initiative, which has served as a vital source of funding for restoration and projects for TU and many other conservation organizations, as well as harmful provisions related to water management in the West.