What makesTrout Unlimited such a powerful force in conservation across the country is not our expertise in river restoration, led by the world’s best and most committedstaff.

It’s not our 420 local chapters and state councils, led by over 4,000 passionatevolunteers who marshal our 300,000 members and supporters to take care of local streams, engage local communities in conservation and teach local children to become stewards of our streams.

And it’s not our impressive presence in advocacy – from the halls of D.C. to the municipal board rooms and county commissioners offices.

No, Trout Unlimited makes the impact that it does because of all of these factors combined.

We call it ‘One TU’, this notion that if we’re all pulling on the same rope with a common purpose, if we’re all flexing the muscles and skills we have, and if we all bring these skills, resources and focus to the same objective, we can accomplish anything. 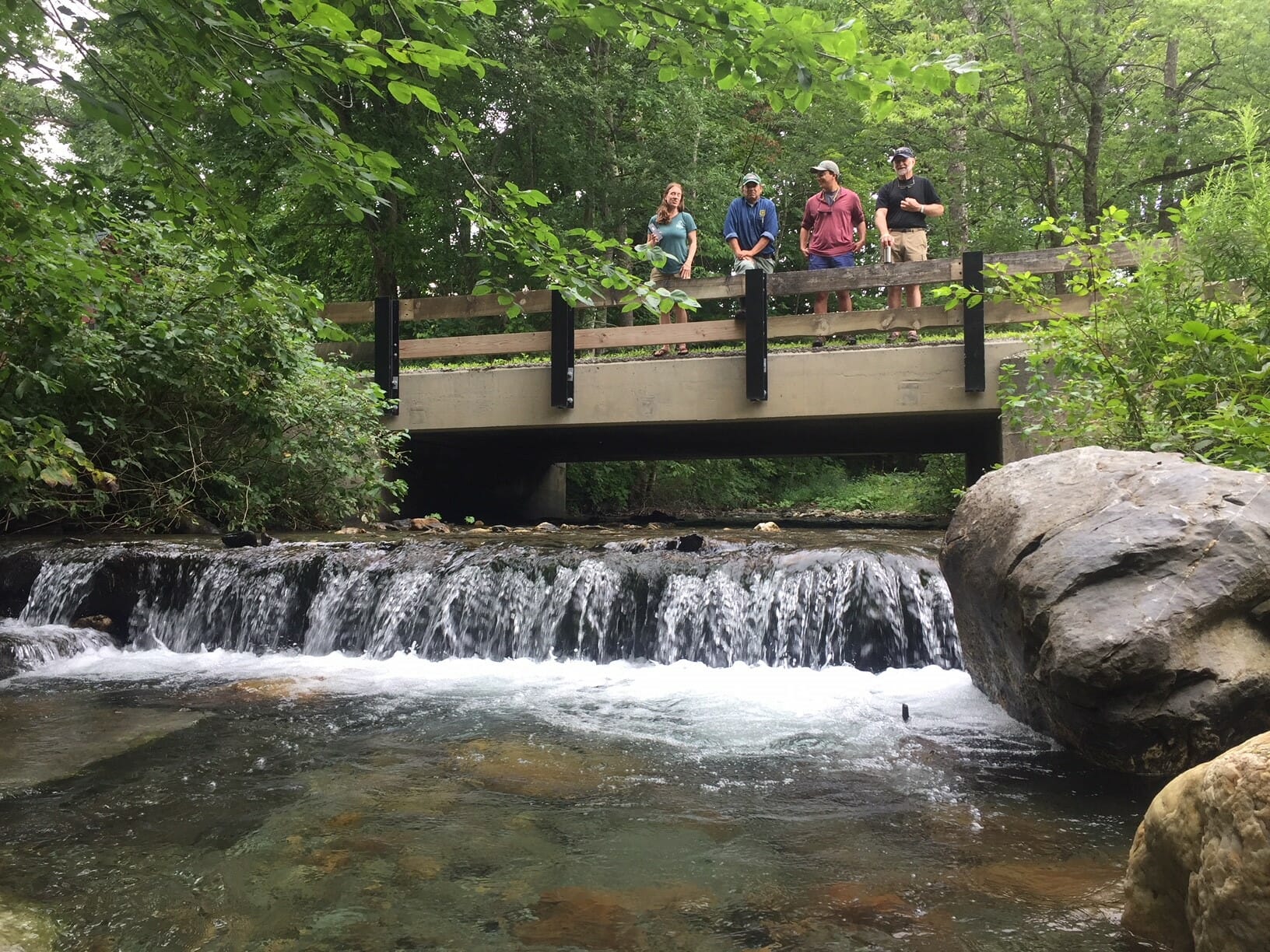 I saw this ‘One TU’ model in action recently along the banks of the Mettawee River – a cold freestone that flows out of the uplands in and around Manchester, VT – and courses north into New York and, eventually, Lake Champlain.

Erin Rodgers, a passionate, and impressive PHD staffer with TU’s New England Conservation Project, has been working the last few years to reconnect the headwaters of the Mettawee to allow native Brook Trout access to prime spawning and rearing habitat upstream. She was joined by Joe Mark, a board memberof the 049 – Southwestern Vermont Chapter and Chris Alexopolous,a biologistwith the U.S. Forest Service who also serves on the local TU chapter board. We were thrilled to have Gerald Berrafatti with us as well, a collegeinternwith my home chapter inConnecticut who has been restoring streams with TU the past three summers.

The game plan was to tour the river from headwaters and tributaries all the way to the main stem in the valley and identify potential project sites where Erin and her team could help tee up projects with partners and engage the local chapter volunteers in helping plan and complete the work.

Joe came armed with ideas on where he wanted to see work done based on years of fishing the river. Chris brought his knowledge of the Forest Service’s goals and resources for the river and Erin carried the tactical know-how to assess and prioritze the sites we’d visit.

The start of the tour was exciting – seeing places where Erin and Chris had already removed culverts posing a barrier to fish passage and replaced them with open bridges and restored stream channels. We also saw small and large dams – targets for removal – and heard how in just a few short years the entire headwaters of this incredible stream would be fully reconnected with no dams or culverts blocking trout! 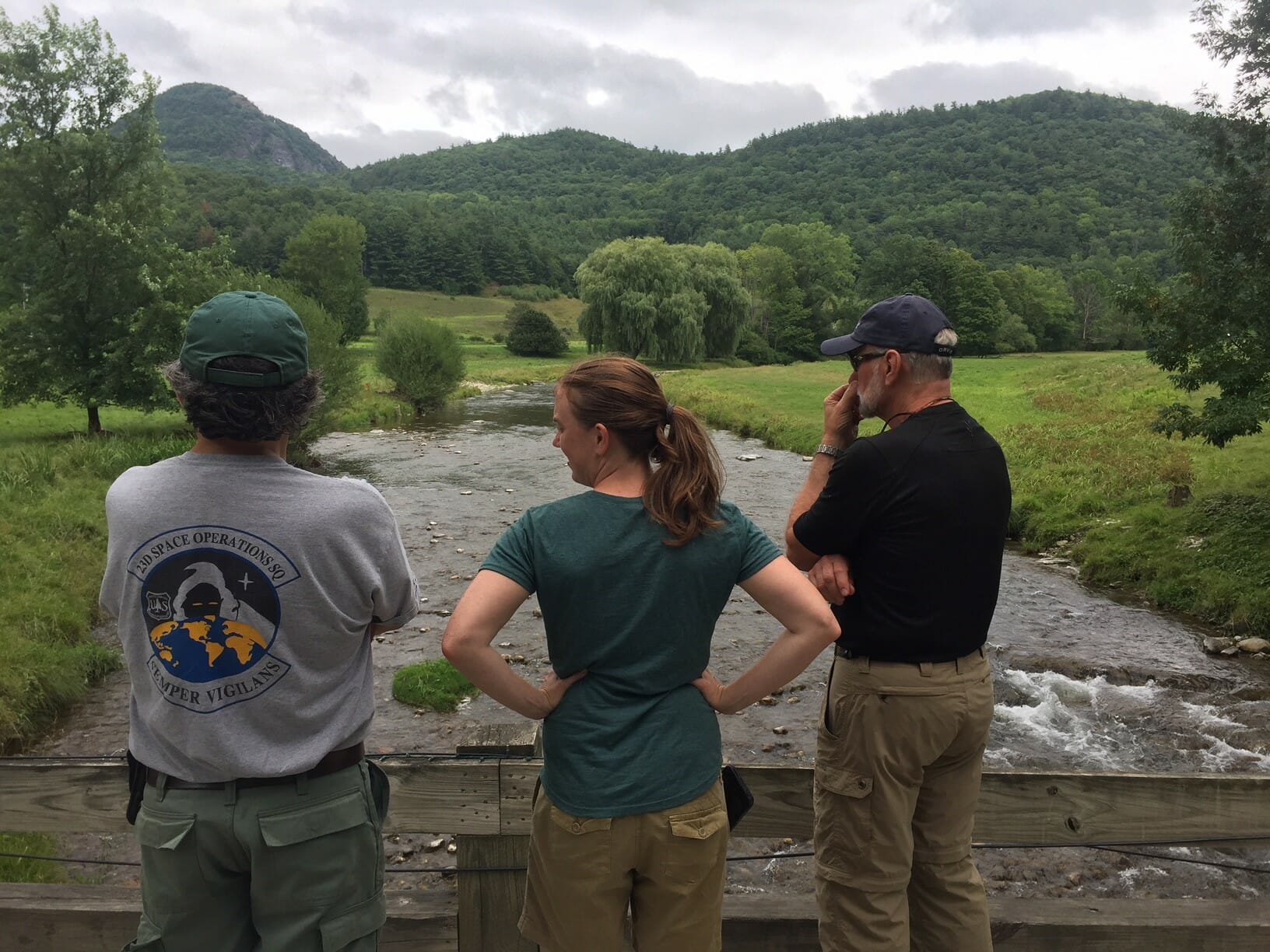 The real magic came, however, as we were driving through farmland in the river valley on our way to see potential habitat project sites. “That’s the Mack Farm there, they’d work with us for sure…” said Joe as we drove past a verdant dairy farm along the river and eyed a stream in need of more riparian buffer plantings. “This family, they don’t want anyone from the ‘government’ on their land, so TU may have to lead the conservation here..” Chris mentioned as we crossed another bridge and saw eroding streambanks.

When we arrived at the site that Joe really wanted us to see – a sheep farm along the river on a steep slope where the animal waste washes straight into the stream, few trees line the bank and the stream has widened to neaely 100 feet of warm, shallow water in palces – I was reminded again how ‘One TU’ can make all the difference.

As we were standing on the bridge shaking our heads at a river desperately in need of help, the sound of an approaching motorcycle attracted our attention and down the hill came the property owner, Peter Helmetag, co-founder of the Ibex apparel company, who slowed to a stop by our side. Typically, a TU and Forest Service first interaction with a landowner is fraught with potential pitfalls and challenges, but as Peter slid off his helmet, Joe stepped forward, hand out saying “Peter, it’s good to see you!”

You see, Joe’s wife served as a school principal in and around the Mettawee valley for over 20 years, and Peteer’s children went through her schools. Chris’ son grew up with Peter’s and they attended college together.

The banter was immediate, comfortable and familiar and when Joe told Peter what TU hoped to do on his land, followed by Erin who explained some of the potential habitat work that would be done- the owner simply nodded and said we could do whatever we wanted, so long as his sheep had one place to ford the river to cross to the adjacent pasture.

The combination of Erin’s expertise, Chris’ familiarity with the region and Joe’s relationship with the landowners in the community all married together perfectly – and the Mettawee will be better protected thanks to it!