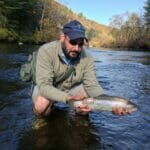 Quarry Dam was a non-functioning concrete and wood dam rendered useless for years. The dam did nothing more than impede trout migration and warm impounded water on the world-renowned West Branch of the Ausable River in the Adirondack Mountains of New York.

Now, after decades of causing problems for trout, the dam is gone. Even better, more dams are coming down on this river. The Quarry dam site after it was removed. Trout Unlimited photo.

While taking out a dam is no small feat, for the 419 – Lake Champlain Chapter and TU volunteers like Bill Wellman and Rich Redman, it was clear that to see their dream of a free-flowing river, they would need to reach far beyond their small circle of anglers and build a groundswell of support for this effort and project.

Not surprisingly, they found incredible partners in the Ausable River Association and were able to secure support and funding from the U.S. Fish & Wildlife Service. The New York Department of Environmental Conservation provided important logistical knowledge and the neighboring 738 -Tri-Lakes and 473-Adirondack chapters also helped.

The chapter was also successful in receiving an Embrace A Stream grant from TU, a program which has funded more than 1,050 local chapter projects across the country with more than $4.6 million since 1973. The Ausable River below the the original Quarry Dam after it was removed. Trout Unlimited photo.

The Quarry Dam project highlights what TU often does best, building partnerships among a wide range of aligned organizations and agencies and then persisting through all the twists and turns of planning, permitting and fundraising to get an important project done. It takes a focused effort, a constant and frequent stream of communications and deep passion for the work to see a project like this through to completion.

Thanks to volunteers like Bill and Rich, the countless TU members and supporters who helped move the project along, and everyone who has played a role in this effort, we all have a chance to catch wild trout in a much cooler and healthier Ausable River!

Jeff Yates is the director of volunteer operations for Trout Unlimited.