Salter brook trout tend to be heavy for their length. (Jeff Reardon photo.)

I recently returned from five days in eastern Maine with a group of volunteers from TU, Maine Audubon and the Sea Run Brook Trout Coalition (SRBTC), along with staff from the Maine Department of Inland Fisheries and Wildlife (MDIFW).

Washington and Hancock Counties are as far east as you can get in the United States. Visiting down there is like stepping back in time about 50 years, with an economy still dominated by commercial fishing (especially lobsters, clams and scallops), agriculture (“wild” blueberries) and forestry. It’s also full of fabulous habitat for brook trout, with a network of small streams and rivers running into tidal bays with tides of up to 20 feet. That makes for lots of salt marsh and estuary habitat — prime spots to look for sea-run or “salter” brook trout, an effort recently covered in a great article by Deirdre Fleming at the Portland Press Herald.

Armed with local knowledge from anglers at the Downeast Salmon Federation, who provided lodging and treated us to a lobster and clam feast on our first night, our group included as many as 16 volunteers and three MDIFW staff for some parts of the trip. Collectively, we surveyed (fished) 35 streams and caught wild brook trout in 28 of them.

Many of those trout came from tidal waters and are undoubtedly “salters” with an anadromous life history. 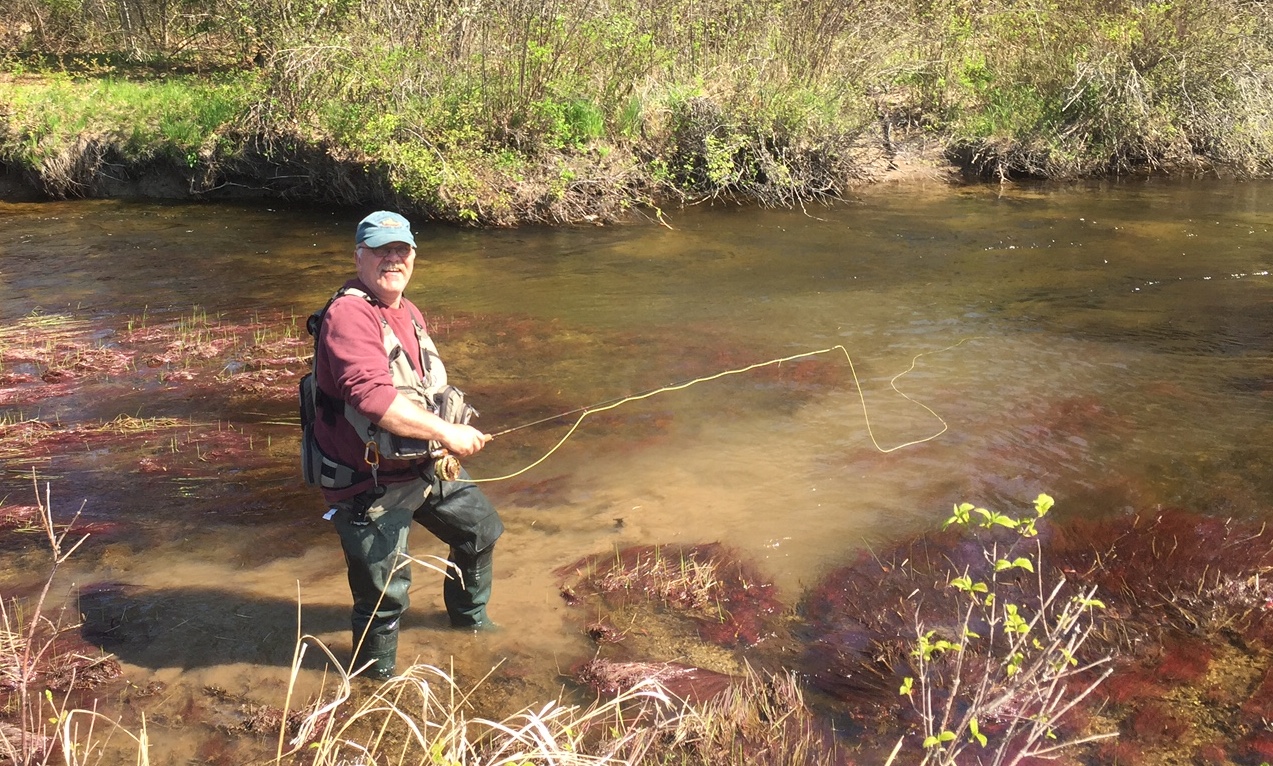 Onile Legasse has been active in the remote brook trout pond survey in Maine, and is now helping with the effort to survey coastal streams. (Photo by Jeff Reardon.)

On Thursday night I joined two volunteers from the SRBTC to dip sea-run smelts under a full moon from one of our survey streams. Working in the dark with head lamps, we found the smelts we wanted, and also saw fingerling brook trout feeding the gravel in a tidal section of stream. Juvenile brookies in the salt marsh? Who knew?

Volunteer Steve Hirshberg, Vice President of the George’s River Chapter of TU, caught three beautiful salters out of a tiny brook you could step across before it hit tidewater. One of the trout was just 11 inches long, but it had the belly and weight of a much larger trout — classic salter, straight from the marsh.

This fish and four others were sacrificed to be used for a University of Maine study hoping to find a way to analyze scale samples or fin clips to determine anadromous status without having to kill the fish. All the rest of the trout caught during the trip were released.

Volunteer Onile Legasse and I fished three spots on one of the prettiest Maine streams I’ve ever been on. We caught brook trout near the headwaters and about 5 miles downstream, where a homeowner came out to talk to us as we were fishing and reported that in the last two years he’s seen anglers take brook trout of 18 inches, 19 inches and 20 inches, all from the same pool. Sure enough, I hooked my best trout of the trip from under the same overhanging bank — but it was only about a foot long.

This stream looked like a Pennsylvania spring creek, and in addition to brook trout, we watched huge schools of sea-run alewives swimming to an upstream pond to spawn. 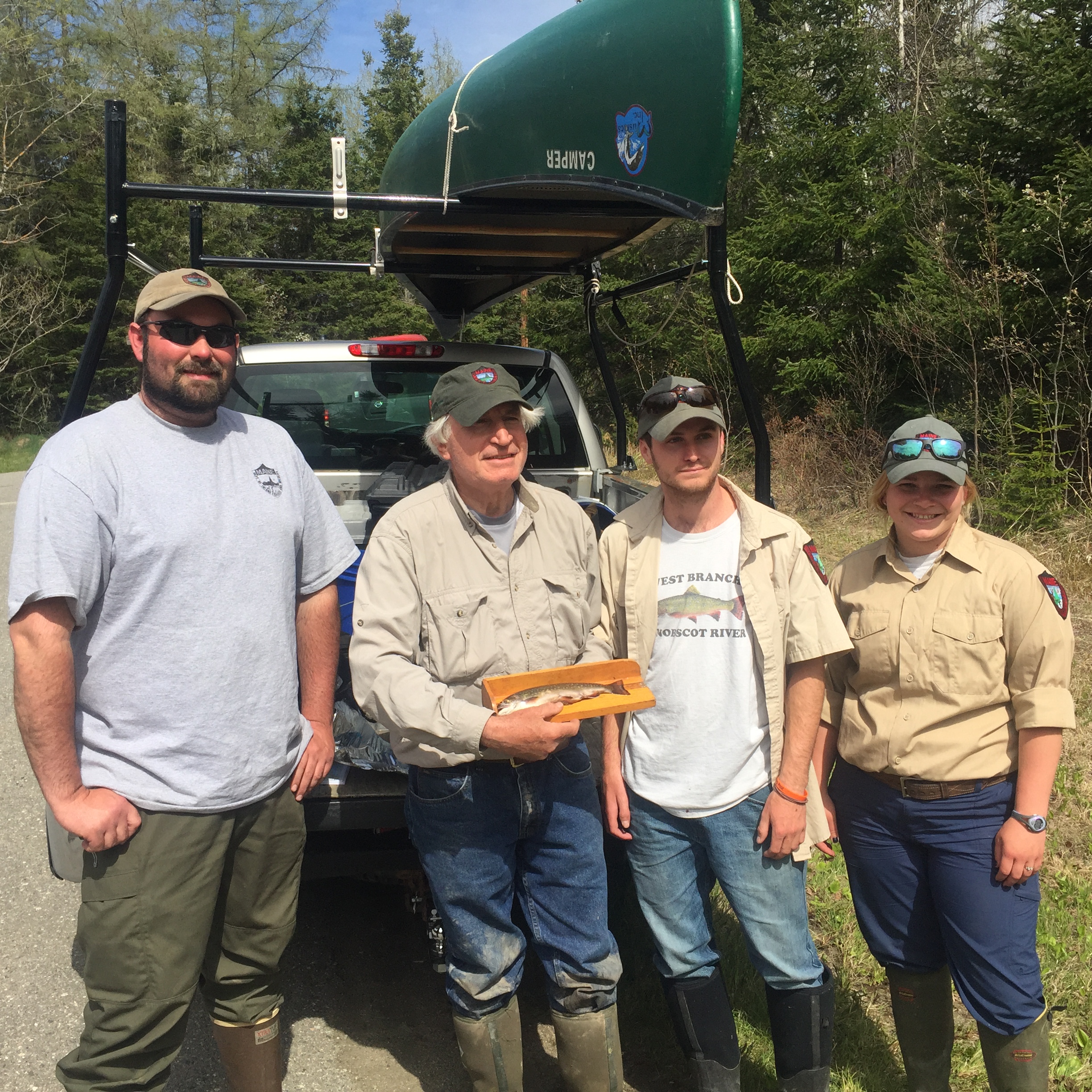 Information from the volunteer surveys is used by the MDIFW to prioritize their formal electrofishing surveys. On Friday, the MDIFW crew (above) was off to electrofish in several watersheds where volunteer anglers found brook trout last year. Our goal is to make sure they have plenty of work to do next year if they want to keep up with our volunteers!

Jeff Reardon direct’s Trout Unlimited’s work in Maine. He is an avid angler who doesn’t mind ocassionally giving up a day (or few) in the office to work with a fly rod in his hand.