Trout Unlimited member Tom Johnson released his second book, “Threaded Journeys,” last summer. The book is a series of essays about two of Johnson’s passions: fly fishing and bowhunting, with interweaving discussions on conservation, health and our national welfare.

Johnson grew up in central Massachusetts with a father and four brothers who shared many similar interests, including fishing and hunting. They traveled often as a family to Cape Cod, New Hampshire and Maine with an eye toward fishing and/or hunting.

Johnson has been fly fishing and bowhunting for more than 50 years. About 25 years ago he began to take fly fishing and hunting trips far from his familiar New England haunts.

The marketing manager and owner of POBCO PLASTICS, Johnson retired in 2015. He lives in Sutton, Mass., and also has a home in Cushing, Maine. In addition to his TU membership (he is a board member for the Central Mass TU chapter), Johnson belongs to the Atlantic Salmon Federation and several regional conservation groups.

TU Eastern Communication Director Mark Taylor, himself an avid fly angler and bowhunter, recently caught up with Johnson to talk about Threaded Journeys.

Q: What is the gist of “Threaded Journeys”?

A: “Threaded Journeys” covers a range of conservation topics and evolves into stories of fly fishing and hunting destinations with friends in North America. I like to share these adventures with people who like or who would desire to get involved in the out-of-doors for just the fun that it affords. If they aspire to get involved with conservation initiatives, several chapters help to guide them in that direction. I talk about ‘Healing Waters’ and other programs that help veterans gain back a sense of peace, place and purpose. I also delve into fitness, wild food and how this influences America’s future.

More than 100 photos are interwoven throughout the book to give the reader a bigger picture of each chapter.

Q: How can people get your book?

A: The book can be found at all major booksellers such as Amazon and Barnes & Noble.

Q: Your first book (“Life on the Fly”) was a coffee table book. How did that endeavor shape your approach to this book?

A: “Life On The Fly” is similar since it also shares fly fishing adventure narratives with many supporting photos, but it does not discuss the hunting motive or story line. It does delve into conservation issues, some of which are updated in Threaded Journeys.

Q: Who are some of the authors, of outdoors books or otherwise, who have inspired and influenced you?

A: There are many authors that I have read with earnest over these many years. They include Edward Weeks, who wrote “Fresh Waters,” Sparse Grey Hackle who penned “An Honest Angler,” Roderick Haig-Brown, Ray Bergman, Frank Woolner, James Prosek and Robert Behnke. I always enjoy the study and scholarship of Ted Williams, who writes for Fly Rod & Reel magazine dealing with critical conservation topics.

Q: Some might find fly fishing and bowhunting as an unusual combination. Why do you think they actually complement each other?

A: Fly fishing and bowhunting have proven a good combination for me since they are both challenging, and the learning curve never stops. Also being of a type A personality, I like to be moving and investigating whatever is before me. These two sports merge the best of both worlds in a great variety of terrain that I have trekked from Alaska to the wilds of Newfoundland and Quebec.

Q: Talk a little about the connection between fishing and hunting, and conservation.

A: When I’m afield I’m always ‘hunting’ for fish and game but, more importantly I’m always hunting for what I don’t yet know — that surprise around the next corner, what will attract a buck to come into view, what fly might work before, during and after a hatch, what section of river should I explore, what swamp and mountain peak need investigation as I seek the cagey whitetail?

I have found that it’s best to just let things be and let them evolve throughout the day with nature setting the tone. Satisfaction comes by just being in the midst of these smooth and ragged journeys, not rushing but, rather, savoring all that the natural world has in store for us.

As sportsman it is important that we enact and maintain practices that provide for healthy populations of wild game and wild fish. Hatchery programs and fish have their place, but healthy rivers and lakes with wild fish should never be stocked with alien hatchery fish. The bad results are well documented when wild fish populations have been compromised.

Q: Have you had any good recent adventures, or have anything big on the horizon?

A: This past summer friends and I spent a week fishing for wild salmon (Quananiche) and brook trout in northern Quebec on the Caniapiscau river. This involved a 100-mile float plane trek from Labrador City. We caught a number of salmon in the 10- to 12-pound range with brook trout up to 5 poujnds. My largest salmon was in the 15-pound range.

This coming summer we are planning a trip to Labrador in a quest for sea-rum Atlantic salmon and brook trout. This will involve fishing both the Pinware and Forteau rivers. Of course I will continue to fish Maine in the storied waters of the Rangeley area up and over to the Moosehead lake region and west to Downeast Maine waters for salmon and trout. 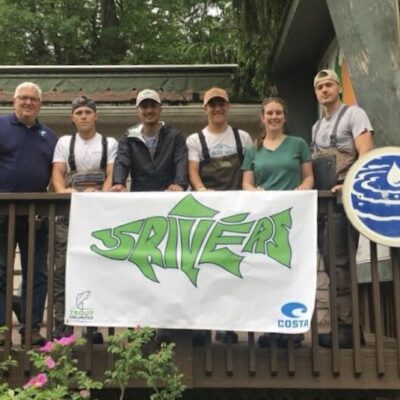 Voices from the River: Connecting with brook trout on PA odyssey