I was momentarily upset when a member/supporter event for work, “Community Fishing Day,” got scheduled the same Saturday as Ladies Backpacking Weekend. Summer goes by so fast, and with visitors, salmon fishing, travel and jam-packed calendars, it’s not uncommon to seldom see your Alaska friends during “light season.”

Ladies Backpacking Weekend, scheduled for mid-August, had been on the calendar since May, and I was organizing. However, as plans began to change and the weather looked like it may not cooperate, I realized Community Fishing Day could be perfect — my girlfriends are always talking about learning to fly fish and then we’d still have the chance to get out of the city and into nature as planned, without feeling the need to make dinner, setup and takedown tents, eat meals, etc., in the pouring rain.

I emailed the group of ladies with the proposed new plan and warned them that the weather looked … not great. I got plenty of, “I’ll play it by ear” replies (which I totally understood as the forecast worsened), but one intrepid friend replied and said she was totally in for a fly fishing lesson.

Due to the rain, my plan was to just make the familiar 2-plus hour drive down and back to the Kenai and Russian rivers on Saturday. But by Thursday afternoon in the office, my dog and I felt like we needed to get out of the city and into the quiet of the woods.

By the time we rolled into the Russian River campground Friday evening and got set up, it was pouring. Sure, I’d anticipated it to be, but it’s always a little more insulting when it, well, actually is. My friend and TU colleague, Eric, had picked a group campsite with a large pavilion to accommodate the “TU Group,” though I was unsurprised to see only Eric and his dogs sitting huddled under the shelter away from the rain by the time I was set up and moseyed down the trail to check things out. We both made a cup of hot cocoa on our camp stoves, and with the warmth of our sleeping bags calling to us, headed into our camps early.

The next morning, I woke up chilly but well-rested to the sound of rain not-so-delicately falling on the canvas roof of my homemade “truck camper.” Seeing my breath in the chilly August morning, I piled on as many layers as would fit under my rain jacket, gathered my stove and breakfast stuff, and headed out to the pavilion to get “Community Fishing Day” started.

Eventually Eric rolled in and we chatted as we both made warm breakfasts and coffee, and concocted plans for last errands before the event started. We packed up – dumping pools of water off my canvass “roof,” and loading soggy sleeping stuff into my truck, and started the day.

The clouds broke slightly by the time I turned into the parking lot where we’d meet our group. By the time we had a few extra rods rigged for beginners, the sun was trying to poke through the clouds and a few friends of TU showed up. My friend Megan rolled up and greeted me.

A complete beginner, I showed Megan how to set up a rod and explained why we’d use the flies we were going to try that day. I explained the basics of fly fishing and felt like I was overwhelming her. We walked down the stairs and onto the path along the Russian River.

It had turned into a nice August afternoon. Tiny bits of yellow started to show on the trees and the scenic river was just as pretty as I remembered it. The madness of sockeye season had ended, but a number of fishermen were still out in search of coho or rainbows.

We found a place and tried a few practices drifts. She got the hang of it quickly, so we decided to walk to another fishier spot to see if we could land one or two. As we walked, we noticed a lot of people fishing, but not many catching.

We attempted the same process a few times — finding a new fishier-than-the-last-looking hole, tried a not insignificant number of drifts, untied a few knots, unhooked a few snags, tried a new fly, and then would move again.

I started to really worry about giving Megan a bad impression of fly fishing and to be honest, questioning all my skills. Why weren’t we catching anything? I thought I had gotten good at this? I called Eric to see what fly I should be throwing, and was bummed (but a tad relieved) to hear that they hadn’t had much luck either.

Eventually Megan and I decided to cut our losses, pack up our rods, and go for a hike to a nearby falls. We enjoyed catching up and the view from the lookout down onto Russian River Falls and pools of spawning sockeye hanging out at the bottom of it. It was a great afternoon.

Still, I was super disappointed and sad not to have gotten Megan onto a fish. As she packed up and was headed back to Anchorage, she told me how much fun she had and how she was excited to try again sometime. Her seemingly earnest gratitude reminded me that such a big part of fly fishing is doing exactly what we did: getting out of the city, standing in a river and focusing on the simple act of casting a fly. We had surely succeeded in that.

Community Fishing Day culminated in a TU barbecue, and by the time that was underway, the rain had resumed and temperature dropped. The thought of setting up my soggy truck camper and sleeping alone in the woods (with my dog) again didn’t appeal, so I decided to jump on the bandwagon and head back to the city.

The next day, the women of Ladies Backpacking Weekend met up at an Anchorage trailhead to hike anyway, despite what one of them deemed as “gale force bullsh*t” weather. We had fun on the hike and, later that night, finally dry and warm in my house, I felt proud of making the most of the crappy weather weekend, and equally excited to get Megan onto her first fish as soon as possible.

Jenny is the Alaska Communications Director for Trout Unlimited. She lives in Anchorage. 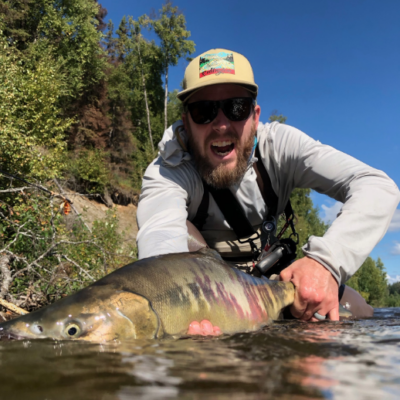 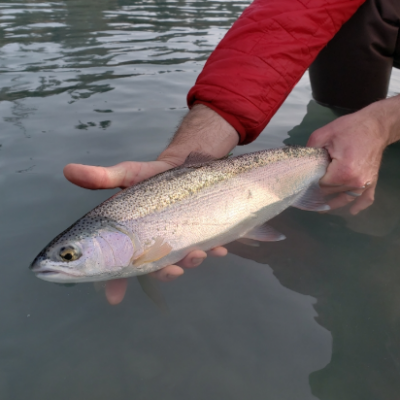 Voices from the River: Exactly where you want to be