A good peanut butter and jelly sandwich should ooze a little when you squish it. It needs quality ingredients and, this part is often overlooked, equal parts PB to J that both go all the way to the edge of the bread, goshdarnit. I am not personally opposed to the addition of other ingredients, but I understand those who might be. It needs to be made with love and anticipation of a great day, is what I’m saying.

I’ve thought a lot about how I found my way into this unlikely sport that still confuses me years in. The more I thought about what really kept me agreeing to show up in the early days to deal with mosquitos, untie knots, and bushwhack into bear country, the more I wondered. Of course, it would make sense for it to be the fish. But, as every angler knows well, sometimes that’s a tall order. So what was it?

I didn’t start spending time outside in earnest until my mid-20s. My then-boyfriend had grown up fishing, biking and skiing through the woods of northern Wisconsin. To him, Outside was church. It was a playground, a respite, a race course, a meeting-spot and a conquest. To me, it was mostly a challenge, at first. 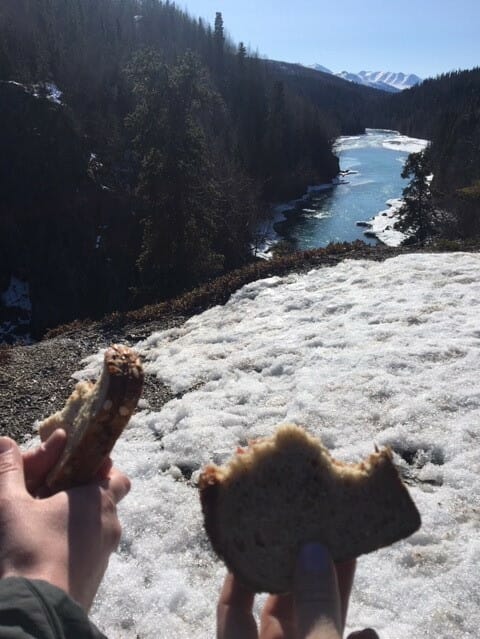 But one thing I could get behind about Outside from the get-go: at some point during the outing, even the energizer-bunny-boyfriend would need to eat lunch. Despite whatever toils or tribulations the preceding hours had in store, with a little planning, inevitably there’d be a peanut butter and jelly sandwich to be enjoyed in a pretty place.

If it’s nice enough outside to climb, ride, slide or fish, it’s probably even nicer to take a load off, find a rock or stump to lean on, eat a sandwich, and quietly watch the world (river) roll by.

When I think back to what got me started going outside and pursuing outdoor activities with consistency, if I’m honest, that’s it — lunch with a view.

Now that I’m on my way to becoming a “seasoned angler,” whatever that means, I think this ridiculous finding may still ring a true. There are still days I get skunked all morning, or have to hike through mud and fend off mosquitos as if my life depended on it. There are days the wind makes me whack myself in the head with my fly over and over.

But on those days, if a quiet spot is found for lunch with something pretty to look at, I’m probably going to look back on it with a smile and start planning to do it over again.

You can’t count on the fish or the weather. Sometimes you can’t even count on the company. But you can always count on PB&Js.

One of my new year’s resolutions is to introduce new people to fly fishing. I’m excited about getting new people into the sport that I’ve come to love. I can’t promise I’ll be the best teacher or that they’ll catch fish. But I can promise there’ll always at least be sandwiches. 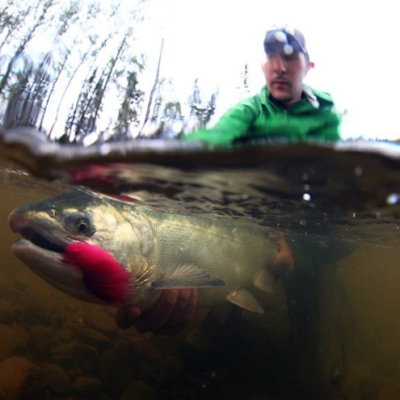 Voices from the River: The posthumous gift of the ‘bug’