Note: Nearly three-quarters of all wild steelhead populations in their native range along the West Coast and in Idaho are threatened (TU’s CEO, Chris Wood, just penned this post on the recent closure of the winter steelhead season in Idaho due to low returns). TU and Wild Steelheaders United are engaged in a focused campaign to restore habitat, reconnect fish passage, recover steelhead runs and sustain angling opportunities across this region. It’s important for all anglers — regardless of gear preference — to adhere to best practices for fighting and handling this magnificent sportfish. Here, a leading steelhead angler offers his take on the benefits and challenges of dry line fly fishing — perhaps the least impactful method of fishing for steelhead.

Steelhead fly fishing, especially with a swung fly on a “dry” or floating line, is an endeavor of self-imposed restraints. It is where one leaves behind the efficiency and effectiveness of other methods in exchange for an experience that is often more challenging, yet for some, more meaningful and rewarding. The sudden attack to a surface fly in summer and fall and the unseen pull to a deeply swung wet fly in winter are what fuels my passion and provide images that stream through my consciousness throughout the year.

Ever since reading the book Dry Line Steelhead by Bill McMillan in the early 90s, I have evolved into an angler who pursues steelhead exclusively with a floating line. Staying with the floating line throughout the warmer months is common with many anglers. However, I may have taken the teaching of Dry Line Steelhead to the extreme, where I am virtually unwavering with fishing surface flies from May through November. 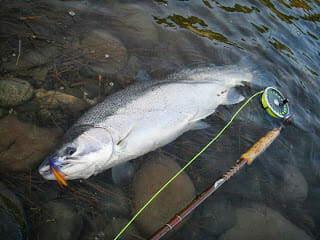 I also fish surface flies a fair amount during the winter steelhead season, especially during March and April and at times when winter conditions are mild and with moderate water levels. The thrill of steelhead takes on the surface is so imprinted in my brain that I willingly forgo other methods even when the odds are stacked against such tactics.

Surface fishing for steelhead is a highly visual method. Just the process of tracking my surface fly during the swing is mesmerizing and satisfying. I found that, for me, fishing patterns either difficult to see or that didn’t stay on the surface consistently defeated the purpose of fishing on top. Over time, I experimented with surface patterns until I arrived at a pattern of my own design that satisfied my needs for visibility and consistent waking.

My fly was a merging of Dean Finnerty’s skater, Tony Wratney’s Foam Dome, the Yellow Stimulator, and Mark Pinch’s Riffle Dancer. The resulting fly was highly visible, stayed on the surface consistently, and eventually, found approval from aggressive steelhead. Early prototypes were gifted to friends Adrian Cortes and Steve Turner. In turn, Steve Turner showed my flies to steelhead guide Jeff Hickman. Jeff’s first response to seeing the strange fly was “This thing looks like it has a little wang” and the name of my fly was born. 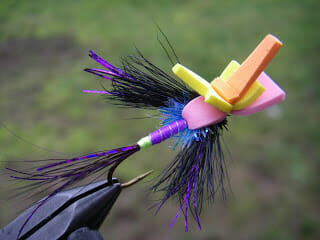 Fishing the floating line throughout the winter steelhead season can be a most difficult proposition. The colder water and often more volatile conditions can leave one seriously questioning the rationale of making a tough game even tougher. Staying with a floating line, long mono leader and flies tied on large/heavy hooks (like the Winter’s Hope) or other lightly weighted patterns can seem like an exercise in futility during winter. However, by being selective of water types one chooses to fish, success with the dry line can be attained. I tend to look for soft inside cushions that allows the fly to sink and stay reasonably deep during the swing.

Fishing the dry line swing during winter means one is knowingly choosing to utilize a method that further reduces a fly fisherman’s effectiveness. It is a self-imposed restraint and you are likely to be out-fished by nymphers and those equipped with sink tip systems. However, when that hard-earned pull comes from an unseen chrome creature in the depths, all sacrifices will be worthwhile and the reward will be sweet with a great sense of accomplishment through beating the odds. 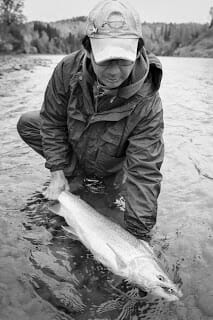 BC steel on the dry line (T. Hirano)

Dedication to the dry line has led me to examine my own motives and what I have realized is that going after numbers of steelhead is never the point. What I value most from pursuing such a magnificent gamefish is finding joy in utilizing methods where my patience, persistence, faith, and tenacity are put to the test. In my opinion, Dry Line methods bring out the steelhead’s best qualities as a sportfish – that savage attack to a surface fly and the solid pull to a deeply sunk fly highlight their aggressive nature and strength.

Todd Hirano is based in Oregon’s Willamette Valley. He is widely known in the steelhead angling community for his dedication to fishing the dry line. He writes about his experiences on his blog DRY LINE STEELHEAD OREGON- A Fishing Life Inspired by the Writings, Methods, and Conservation Work of Bill McMillan. This article was first published on the blog of Wild Steelheaders United.