I grew up in the Tongass, the largest national forest in the United States. Most days, I feel like my upbringing here was like winning the lottery.

My home bursts with diverse attractions and incredible recreation opportunities no matter my thrill of choice at any given time. One of my favorite parts about the area is that I can wake up, and within 10 minutes in any direction be fishing, hunting, hiking, biking, camping … you name it.

If you’re an angler, throughout the year you can search out the elusive steelhead in small creeks, swing flies for all five species of wild Pacific salmon, catch sea-run cutthroat, Dolly Varden and rainbow trout. Each winter, I dream of the cold spring mornings on the stream bank, bundled up like a marshmallow, trying to drop my fly in the perfect pocket to trick that one dang steelhead into grabbing. On late-summer evenings, I love to swing flies through moving tidewater, hoping to entice sea-lice covered salmon.

The Tongass is yours

The Tongass National Forest is such a magical place because of the old-growth timber, and the untouched lands that surround us. The Tongass — all 17 million acres of it — is home to some of the oldest trees in the nation, some over 800 years old, and provides essential habitat for fish, wildlife and recreation of all kinds. What’s more, the Tongass is public land. It belongs to every single American. It’s yours to enjoy. And, frankly, it’s yours to protect.

The forest is wild and living; covered from top to bottom with lush green plants growing symbiotically with one another, it is one of nature’s most-perfect ecosystems. The streams act as the lungs of the forest, breathing in fresh nutrients through the salmon spawning season. The wildlife thrives in the high canopy of the Tongass’ trees, creating ideal living habitat to birth and raise the next generation. And, much like the wildlife, the communities thrive with the angling, hunting and tourism industries. The forest continues to function as it should, because it remains intact and largely untouched. However, it seems federal decision makers — the property managers who take care of the forest on our behalf — and the timber industry have different ideas for the Tongass.

Speak up for the Tongass

Last week, the U.S. Forest Service recommended a “full exemption” of the Tongass from the national Roadless Rule, which would undo protections for over 9 million acres of old growth trees. The giant red and yellow cedars have stood sentry over the Inside Passage for centuries. When Capt. James Cook sailed by in 1778, many of trees standing today were there to witness the tall ships cruise by. They were there, too, when countless fishing and hunting excursions were carried out by the native tribes that have inhabited the Tongass for eons. Repealing the Roadless Rule would open these wild areas of the forest to industrial-scale clear-cut logging, and those sentry trees would be put in dire peril.

The Roadless Rule and Alaska

The Roadless Rule currently prohibits commercial logging and new logging roads on inventoried roadless areas nationwide. Within the Tongass, many of the most important fish and wildlife areas, including the Tongass 77, are in inventoried roadless areas. (The Tongass 77 consists of the most prolific salmon, trout and wildlife areas and watersheds in the Tongass National Forest, which Trout Unlimited has worked hard to protect for years).

Simply put, the Roadless Rule protects the fish and wildlife within the Tongass for future generations. It sustains Alaska’s economy, provides recreational opportunities, feeds the world and slows climate change.

The Roadless Rule is a common-sense policy that safeguards the trees, fish and wildlife resources. In order to keep these areas wild, the streams clean, and the outdoor recreation opportunities high, we all need to speak up for these important public lands in Southeast Alaska. The Roadless Rule in Alaska could be overturned in less than 30 days, putting places that I, as an angler, hunter and outdoorsperson, hold most dear.

There is a reason that Southeast Alaska is on so many bucket lists; the landscape calls to them. The cold, clean ocean, the swift rivers running beneath craggy peaks and the towering trees make this place unique on the planet. If you love wild places and intoxicating views, you’ll definitely want to visit the Tongass, and be sure it remains as it is today.

Then, maybe you’ll be next the lucky soul trying to get that chromer to grab or that Dolly to hit streamer. 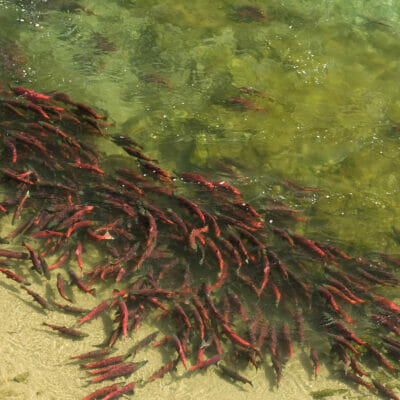