Steelhead, the sea-run version of rainbow trout, have one of the most diverse life histories of any fish species.

On the West Coast, this life history diversity has enabled steelhead to colonize and persist in coastal drainages in a region—the south-central coast of California—with highly variable precipitation, temperatures and streamflows.

However, 150 years of dams and other development, increasing diversions of water from streams, coupled with several severe droughts since the 1970s, have had a significant impact on steelhead here. Over the past four decades annual returns of steelhead adults between Santa Cruz and Santa Barbara have been a tiny fraction of their estimated historic averages.

Trout Unlimited is working along the south-central coast of California to recover native steelhead runs, largely by restoring habitat and enhancing fish passage and dry season streamflows through cooperative partnership projects with landowners and agricultural operators. On the Carmel River and other streams, our efforts have paid major dividends.

But often our restoration work takes place in small creeks rather than mainstem rivers. One such waterway is Pennington Creek, a tributary to Chorro Creek, which flows into Morro Bay near San Luis Obispo. Chorro Creek and its tributaries provide important habitat for multiple life stages of native steelhead, which is listed as threatened in this region.

For the past three years, TU has been the lead partner in a major project to remove a high-priority fish passage barrier on Pennington Creek at a diversion structure operated by the San Luis Obispo County Office of Education’s Rancho El Chorro Outdoor School and install a new screened diversion to protect fish and streamflow.

Ben Cook, TU’s California Streamflow project coordinator and manager of the Pennington Creek Project, said “One of the most important aspects of TU’s work is engaging the next generation in coldwater conservation. Our Headwaters Youth Program is a very successful model for doing this, but we are always looking to scale up this effort. That’s why it’s so powerful working with partners like the California Conservation Corps and the San Luis Obispo County Office of Education’s Rancho El Chorro Outdoor School, who share our commitment to educating and training young people in stream stewardship and who can help us connect with different demographics.”

In the fall of 2018, the ladder and historic weir were removed, and the stream channel modified to provide a series of engineered step pools to allow upstream and downstream passage for all life stages of steelhead. The existing diversion was modified to meet federal and state resource agency fish screening criteria, and to be protective of flows and steelhead critical habitat by passively ensuring a minimum bypass flow of 0.24 cubic feet per second.

The Project completed construction last October, then withstood the heavy rains of the winter of 2018-19. Juvenile steelhead were observed re-occupying the project reach immediately after completion of the construction phase and again this spring.

Stabilization of all disturbed areas in the Project reach began upon completion of instream construction activities. Leftover soil and gravels excavated during construction were removed from the staging area and disposed of offsite. The staging area was covered with native mulch, slash, and vegetative debris that had been removed to establish site access.

The TU staff, various consulting firms, construction crews, and resource agency personnel involved in the Pennington Creek Project worked hard to minimize impacts on steelhead and other sensitive wildlife during all phases of the project, including capture and temporary relocation of juvenile fish. This type of collaboration among multiple partners is often a requisite of such restoration projects.

The Pennington Creek Project enables unimpeded fish access to 2.3 river miles of Pennington Creek that were not available to steelhead when the weir and fish ladder were in place, effectively doubling the amount of available spawning and rearing habitat in the creek for this species. The Project site will be monitored from 2019 to 2021 to ensure success criteria are met, including survival of mitigation planting, vegetative cover of disturbed areas, and stability of instream structures.

This monitoring is expected to reveal something else, too: the presence of steelhead fry, indicating that steelhead likely spawned in and above the project reach this past winter and spring.

All photos: Ben Cook, except where otherwise noted. 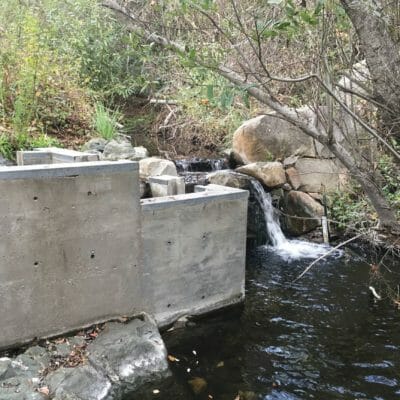