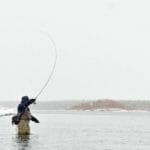 New drilling policies are a win for fish and wildlife. Now we need to modernize oil and gas leasing rules on public lands.

Last month, as part of landmark climate legislation, Congress acted for the first time in decades to modernize the outdated oil and gas leasing program on our public lands.

The reforms signed into law in August established new fees, increased and added new royalty rates, and eliminated non-competitive leasing. These changes will reduce impacts to fish and wildlife, protect water resources, and affirm America’s commitment to public lands management that balances the interests of multiple users. At the same time, the new policies mean that taxpayers will receive a fair return as domestic oil and gas production ramps up.

Trout Unlimited has been a leader in advocating for these reforms for the past decade, working to protect important wildlife refuges and watersheds threatened by speculative and non-competitive leasing, such as the Ruby Mountains of Nevada and the Tendoy Mountains of Montana. These places offer world-class angling and hunting opportunities—and little economically-recoverable oil and gas resources.

But if the new oil and gas provisions are to be effective in protecting these and other cherished places, the Bureau of Land Management needs to act swiftly. BLM needs to update its Resource Management Plans and the rules for the federal onshore oil and gas program—some of which don’t even refer to oil and gas leasing, let alone include guidelines to ensure responsible drilling.

While the new law enacted significant reforms to limit speculation, it did not include specific guidelines on how to manage areas with valuable habitat but limited energy development possibility.

In fact, the new law even required the BLM to offer substantial numbers of new oil and gas leases in order for agencies to approve proposals for renewable energy development. Within the year prior to permitting a wind or solar project, the BLM must have offered at least two million acres of oil and gas leases or 50 percent of the acres nominated, whichever is less. This provision applies for the next decade and could put substantial pressure on the public land agencies to ramp up fossil fuel leasing even as the country moves toward a clean energy future.

Given this arrangement, it’s crucial for the BLM to draft new rules for the federal onshore oil and gas program that prioritize areas with the highest potential for industrial-scale energy development, and not those—like adjacent to national wildlife refuges and wild trout habitat—that are critical to the health of vitally important waterways like the upper Rio Grande in Colorado and Green River in Wyoming.

Balancing responsible energy development with the protection of important fish and wildlife habitat is key to the future of the West. Stay tuned for the opportunity to tell the BLM to change 100 years of thinking and make this the rule, not the exception.