Thanks to federal investments, TU’s Dustin Wichterman has audacious goals for his home state

Dustin Wichterman has always been connected to the wilds of West Virginia.

He spent his youth traipsing through the Mountain State’s woods and waters. Fishing. Hunting. Foraging ramps and wild mushrooms. Being a mountain kid.

It was great, but even as a youngster Wichterman knew things weren’t perfect, his adventures taking place among scars left behind from landscape-altering activities such as mining, logging, development and agriculture.

Now 36, Wichterman is still out there. But these days the West Virginia University grad spends a lot of his time working to help improve the landscape as the associate director of Trout Unlimited’s Mid-Atlantic Coldwater Habitat Program. 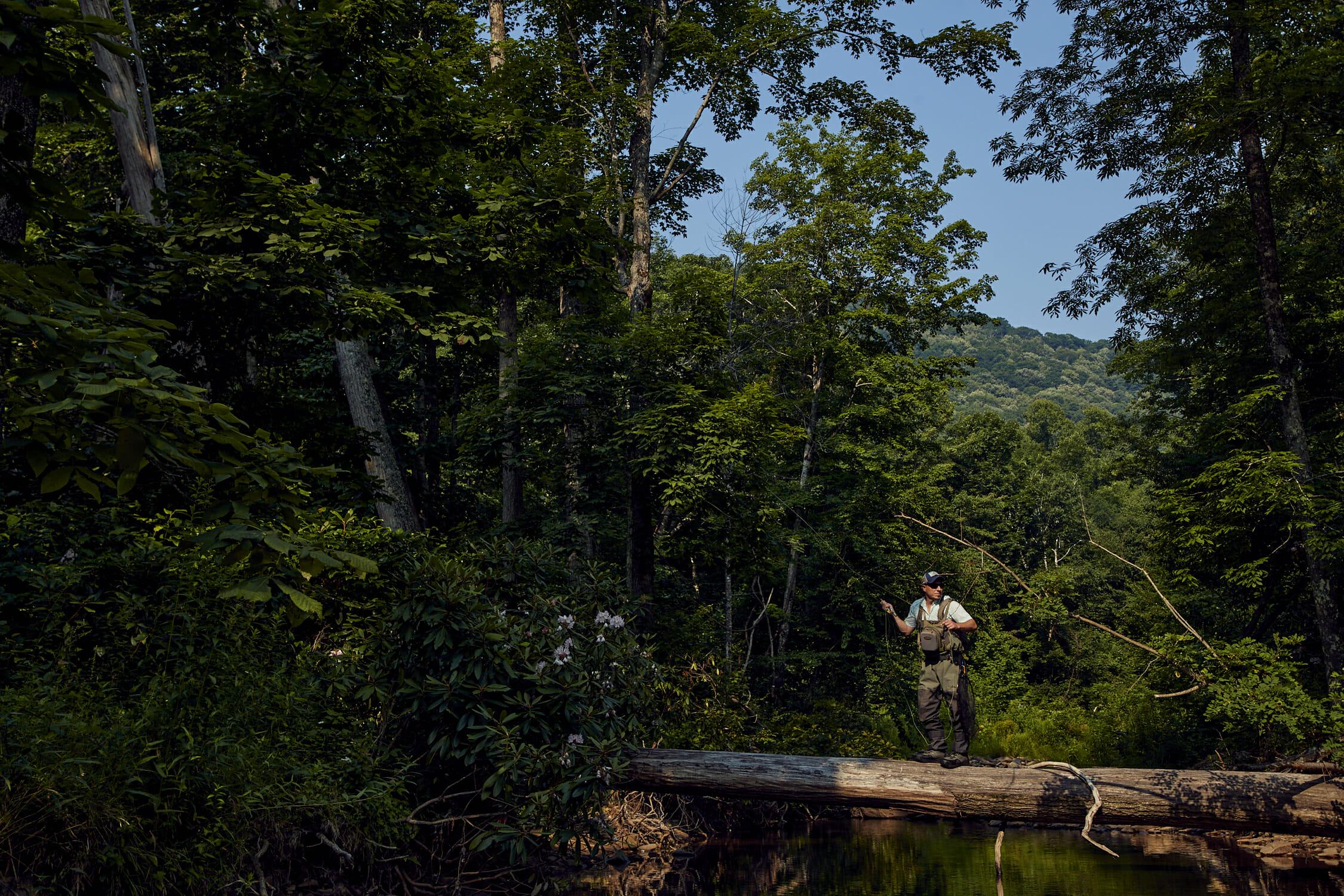 As highlighted in a recent feature in the national magazine Garden and Gun TU has reconnected dozens of miles of streams in West Virginia by removing barriers such as low water bridges and culverts and replacing them with structures like span bridges, more passable by fish and vehicle traffic.

Crews have enhanced habitat in miles of streams by adding cover for trout and other fish. They have repaired eroding streambanks and built more than a million feet of fence to protect streams from livestock. They have helped decommission old, eroding roads that were dumping tons of sediment into streams.

“We are making tremendous progress with our restoration work,” said Wichterman, who majored in fisheries. “But we couldn’t be making nearly the impact without important federal funding sources and help.”

The projects add up to cleaner, colder streams. To preserved farm soil and acreage. To better habitat for fish, including the colorful wild trout that lure anglers to gurgling mountain streams.

All that work creates lots of jobs, too, not only for TU and its staff in the state but also for contractors and other partners in the projects.

While TU’s efforts are a common thread throughout, another commonality is the importance federal funding and support have played.

TU is eager to increase its commitment to restoration efforts in — and beyond — West Virginia in the wake of funding that will be made available by the recently passed Infrastructure and Investment and Jobs Act, bi-partisan legislation passed in 2021 with critical support from West Virginia Representative David McKinley and senators Shelley Moore Capito and Joe Manchin.

A Nation’s River from Trout Unlimited on Vimeo.

TU is experienced tapping into a wide variety of programs to help pay for restoration work, which in West Virginia takes place both on private property and on public land.

The sources are many and varied and include the EPA’s Chesapeake Bay Program and many programs within the U.S. Department of Agriculture. The USDA is the umbrella under which the Forest Service, the Fish and Wildlife Service (with specific funding from the Partners for Fish and Wildlife, Fish Passage and National Fish Habitat programs), the Farm Bill and many other programs fall.

In many cases, TU works with cooperative landowners to help them navigate funding sources to address restoration needs, which can include repairing eroding banks.

“That not only is important for landowners who are seeing their soils wash away but also for the health of streams and, eventually, the Chesapeake Bay,” Wichterman said.

Those relationships often start with Wichterman making phone calls or knocking on doors, his status as a lifelong Mountaineer helping him connect with those who may be wary of accepting government assistance.

In most cases funding is contingent on landowner participation, their financial and in-kind support helping to increase the impact of the federal financial investment.

Wichterman and the rest of the West Virginia team also partner regularly with the U.S. Forest Service for multiple projects on the Monongahela National Forest. TU’s involvement helps increase the Forest Service’s bandwidth on restoration needs, which includes enhancing in-stream habitat as well as helping to decommission old, damaged and eroding roads that are no longer needed.

While there are many human beneficiaries of the work, it doesn’t end there. Healthy streams support healthy aquatic ecosystems. In West Virginia, that often translates to more robust populations of wild trout — an important driver for the more than $350 million that 457,600 licensed anglers spend on fishing in the state annually.

Wichterman is one of those anglers, having enjoyed first-hand the improvements in fishing since TU’s restoration efforts began in earnest more than a decade ago.

Often with his young daughter in tow, Wichterman has tangled with trophy-sized wild brook trout — some topping 15 inches — in restored streams. He envisions a day when those fertile streams may give up brookies pushing 20 inches, something that was possible before the arrival of colonists but hasn’t been seen for many generations.

“That’s a lifetime trophy brook trout anywhere and it’s so exciting to think that we could have that in West Virginia again,” Wichterman said.

It’s an audacious goal, certainly. But, thanks in part to federal funding sources helping to support watershed-scale restoration work throughout West Virginia’s trout country, one that becomes more attainable by the day.