From the magazine: Finding Trueblood 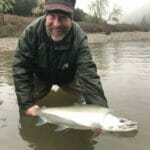 In 1918, Cecil, barely 5 years old, went to his parents in their Idaho home and said he didn’t like his name and that he wanted to be called Ted like his Teddy Bear.

So started the iconic name of one of the most legendary outdoor writers this country has known. Ted Trueblood.

There is a segment of the American public who grew up reading the “Big Three” outdoor magazines of the 20th Century—Sports Afield, Outdoor Life and Field and Stream. I am one of them. I read these magazines at night under the covers by flashlight when I was supposed to be sleeping. I learned how to fly cast in part by reading magazines, I learned how to be a woodsman, to hunt, track, shoot and be a camp cook. I learned by reading and Ted Trueblood was one of those teachers. The primary one.

It was a romantic occupation, outdoor writing in the heyday of the big magazines. Almost all of the writers of the time were skilled first with outdoor equipment and second or even third with the English language. A few, like Jack O’Connor, could really put together a sentence. Trueblood, O’Connor and Ernest Hemingway are the three writers who made the outdoors pop off the page for a little boy of the Rockies and they all had deep roots in Idaho.

Trueblood’s were the deepest, the son of Idaho who tried New York City with his wife for a while as an editor at Field and Stream in the war years, only to pack it in for home after that experiment. The bosses at Field and Stream knew a good thing when they had it and Trueblood became an anomaly of his generation—a remote employee. He spent almost his whole career at the magazine from 1941 to 1982, most of those years far removed from the New York headquarters. At his pinnacle, he attained a near-celebrity status not only in Idaho, but nationwide, and with good reason. The man could write, and he was also tremendously skilled with a rifle, shotgun or fly rod in equal measures. But, according to his son Jack who retired from Idaho Fish and Game after a career in conservation communication, he would have been most proud of his long track record as a conservationist. Ted knew that hunting and fishing and conservation are deeply intertwined and he wrote that way.

In the Idaho of the last century, there were four men who were giants of conservation—and hunting and angling—who had a tremendous influence that ripples to this day. U.S. Senator Frank Church was the son of a Boise sporting goods store owner and a true outdoorsman. Ernie Day, an avid photographer, conservation organizer and angler. Brue Bowler, a gifted attorney and sportsman. And the wildly popular and talented writer Ted Trueblood. These men worked in concert throughout their lives to keep Idaho’s hunting and fishing topnotch. They were instrumental in the nation’s Wilderness Act of 1964. They combined forces to support 1968’s Wild and Scenic Rivers Act. They helped establish Hells Canyon National Recreation Area and combined the Salmon River Breaks Primitive Area and the Idaho Primitive Area to form what is perhaps the country’s most iconic wilderness area, the Frank Church-River of No Return Wilderness Area that protects 2.36 million acres of some of the best salmon and steelhead habitat on the planet. This pristine anadromous high-country habitat is one of the main reasons Ted Trueblood pushed so hard for wilderness, said Jack.

Today, Trueblood would be sick about the state of salmon and steelhead in Idaho. “He’d be really upset because we are looking at extinction in a matter of years,” Jack said.

Ted’s eloquent words helped stop the disastrous 600-foot high Nez Perce Dam that had been planned on the Snake River below the mouth of the Salmon. This was the location of Trueblood’s film “Steelhead Junction” where Trueblood and a friend stood in a riffle and caught steelhead after steelhead—so many that Ted had to switch the rod to his left hand because his right was so tired from fighting fish. Trueblood and the film crew were out for 20 days on the river, Trueblood, double-hauling a limber bamboo fly rod and hooking and fighting thick, vigorous wild steelhead on flies he tied riverside.

In a famous 1960 Field and Stream article titled “Must the Salmon River Die?” the reader was transported to the Middle Fork of the Salmon in a canvas tent beneath the pines. Trueblood was woken in the middle of the night by the sound of spawning, splashing salmon: “loveliest of all in the moonlight was the riffle that stretched diagonally from the edge of our ‘lawn,’ 20 feet down a gentle slope below the tent, to the opposite bank, 50 feet farther away. It was not a fast riffle; its voice was only a murmur, and nowhere was it more than knee-deep. Now, washed by the pale moon, it was an ever-moving, ever-changing sheet of silver, purling over the rocks, eddying in the little pockets, gliding softly toward the pool below.”

Trueblood wraps up the article with a call for action by Field and Stream readers: send a letter opposing the Nez Perce Dam to attorney Bruce Bowler. And these words: “The death of a great river is a tragic and wasteful—and very final—thing.” More than 3,000 readers put pen to paper and the dam was stopped in its tracks by what was very likely the most powerful piece of advocacy writing of the age.