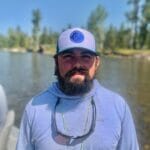 I can distinctly remember the first few flies I started fishing with. As I would imagine the case is with many people, that selection of a dozen flies was a ‘who’s who’ of the classics. The Adams, Elk-hair Caddis, Muddler Minnow, Pheasant Tail, and Royal Wulff seem almost like names from scripture in the pantheon of fly fishing.

The Royal Coachman wet fly shares similar prestige with the aforementioned patterns, and just as the venerable Adams was given its parachute makeover, so too was the Coachman adapted to suit anglers’ needs.

On the high desert rivers of the Pacific Northwest the Steelhead Coachman was born, and to this day it remains one of the most effective summer steelhead flies ever conceived. If you were to look in the box of a seasoned steelheader on the banks of the Snake, Grande Ronde or Clearwater chances are good you’ll find this pattern.

But while the Steelhead Coachman remains a constant on these fabled waters, the fish that inspired its creation might not be. Steelhead numbers throughout the Columbia River basin have been in steep decline for many years. If nothing changes the extinction clock for these iconic fish might soon strike midnight.

To learn why the four Lower Snake River dams must be removed if steelhead are to survive—and how you can help—please click here or type tu.org/lowersnake in your browser.