Step one: throw a long cast down or upstream, immediately click the bail, establish tension, then activate your lure with a six to eight foot pull. Step two: stop everything. In these two moves, you have alerted every trout in the pool to the arrival of a big and vulnerable prey. Step three: resume a moderate speed retrieve, throw in a short pause or two if you want. Be the Rapala (or Panther Martin), like you can see that kype-jawed brown trout closing the distance on you. Simultaneously channel a desperation to escape with a certainty that you won’t. Understand that you are about to get hit.

The “kill trick” is Chris Michael’s favorite method for getting his clients into fish in the Rio Grande gorge. “Trout are like wolves, something struggling is like a dinner bell. The trick works best if you believe this and know it. Confidence. Sometimes when I go fishing, I feel like the fish are already hooked when I park my truck at the trailhead.” 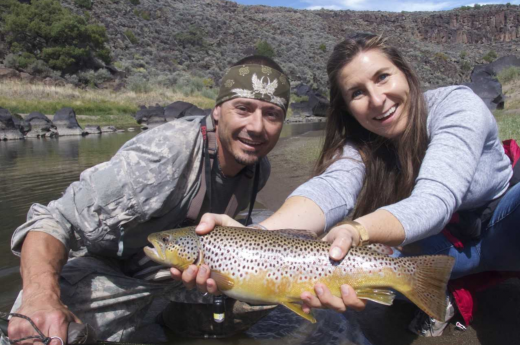 Chris lives in his wife Patricia’s native village of Questa, N.M., with their five-year old Josh and their toddler named Autumn. He opened Rio Grande del Norte Outfitters in 2015 and offers fly and spinning options on waters such as Eagle Nest Lake, Cabresto Creek, the Red River and the Rio Grande. On the Rio, pocketwater calls for flies, and pools are for hardware; but like any responsible guide, Chris doesn’t restrict himself. If flies are working – the Poundmeister and Copper John are his money patterns – Chris will slow nymph the frog water. If hardware is working, Chris coaches clients on steering lures through and around tackle-chomping boulders, a task often demanding the physical coordination of spey casting and the delicacy of pairing duck quill wings on a size 22 hook.

Chris Michael is a true child of the Rockies with deep and varied roots across a geography extending from the Denver to northern New Mexico. Though a blend of Spanish and what he calls, “Taos hippy” heritage, he identifies as Taos Puebloan along his mother’s bloodline. Chris’ earliest memories of pueblo life centered around kids and elders piling into beds of pickup trucks before zipping off to fish and hunt. Since then, he’s crawled across almost every inch of the Rio Grande del Norte area. Given how much of the terrain is either vertical, carpeted by boulders and tree thickets, or all of the above, much of this crawling is of necessity. Chances are excellent that you could be fishing your personal secret hole on the Rio Grande without knowing that Chris Michael has already named it—Monster Mash and Superdome are two favorites—for the many outstanding fishing days they’ve provided him.

That Chris and his family are at once products and integral components of their landscape is palpable from the first handshake. In addition to being an administrator at the Questa Credit Union, Patricia the secretary for a local non-profit and a stalwart participant in the local small business roundtable. In addition to helping his wife run the village’s youth baseball league, Chris plans to open a tackle shop and hold free fly-tying clinics and other events to bring his community together. Improving their village was a conscious decision this couple made before settling in Questa.

But being committed to their community, especially in the wake of the closing of the nearby Chevron molybdenum mine, doesn’t mean that living there is easy. Among many jobs he’s held since locating in Questa, Chris has been a lifty at a nearby ski area, a bouncer, a woodcutter, and has tied rebar at the mine. And since he opened his guide business, the lack of government certified child-care in Questa has forced Chris to forego mid-week guide trips so he can care for his daughter while Patricia is away at work. While treasuring his time to nurture Autumn, which he combines with making wood picture frames and accessories for sale, Chris acknowledges this as a costly sacrifice.

And one he embraces unequivocally. “I used to own a huge home in Phoenix,” he says. “If you told me I’d be happy to give all that up to live in a one bedroom trailer home, I’d have said you were crazy.”

Patricia adds, “Every morning when I’m driving to work with the mountains all around me, I feel so blessed. We really are living the dream.”

She tells me this while standing on the west rim of the Rio Grande gorge, where a group of people has convened to watch the release of an immature bald eagle back into the wild. On a February fishing trip, her husband had come upon the bird at river’s edge. It was paralyzed, and his attempts at revival were met with the eagle’s desperate screams. Perhaps unaware that an eagle’s feet can apply approximately 3,000 pounds of squeezing force, Chris carefully picked up the eagle and wrapped it in his jacket. Upon carrying it out of the canyon, he called the New Mexico Department of Game and Fish in hopes that his new friend could be saved.

After months of flight training and chelating treatments to address severe lead poisoning (probably from having eaten a duck full of birdshot), the eagle is strong enough to fly and hunt. The group honors Chris for rescuing this beautiful animal and just like that, it’s in the air.

Majestic wings propel the eagle towards the abutment of the Rio Grande gorge bridge, where according to its handler, it will want to land and get a breather from the stress of being caged, wrestled, and held all morning. But as it approaches the bridge, the eagle banks towards the canyon wall. Every hundred feet or so, it slows down as though it’s found the ideal resting site. Then at the last second, it resumes its flight as though relishing the wind beneath its wings. Even at a few hundred yards below the bridge, we can still see it as it dodges a pair of attacking ravens.

“This was such a spiritually fulfilling experience,” Chris tells me later, his voice cracking. “Giving something back that truly matters.”

After it disappears around the bend, I am overcome by conflicting emotions. I fear for its survival but somehow know the eagle will make it just fine. Chris Michael might agree that it has two things going for it. For one thing, it is home, the safest place it can be. Perhaps more important, it can fly.