A single fish can mean so much.

A single fish made me really happy recently, and I wasn’t even fishing.

To be sure, this was no ordinary fish. It was a brute of a steelhead, as long as my arm and 12 pounds in heft, easy. So perhaps anyone seeing it languidly finning just upstream of the bridge footing nine miles from the mouth of the Carmel River would have felt the same thrill and lingering satisfaction.

In fact, an encounter I had with another visitor just then affirmed the universal appeal of such a magnificent animal.

That bridge provides access to a county park and its network of trails is popular with hikers. One of these finishing her outing observed me leaning over the railing and taking photos and asked whether I was seeing any fish.

I am in the habit, when asked some variation of this question, of responding, “Yes. See if you can find it.” (This response always is conditional on the petitioner appearing to be of good character and unlikely to return that evening with a gaff or snagging rig.)

Can you see “the stick”?

She peered in the general area where my camera had been pointed. The river had cleared considerably since the most recent rain but was yet a little filmy. Nonetheless it now had that green character, like the flesh of a fresh-cut lime, that may cause a steelheader’s pulse to pound.

She admitted to discerning rocks in the streambed but not much else. “And I see a big stick,” she added.

The fish’s tail seemed the size of a catcher’s mitt and its black border was tell-tale. I advised her to watch the stick for a few moments. As if on cue the steelhead shifted position slightly, then with no apparent effort resumed its stick imitation.

My companion said something to the effect of “Holy s**t!”

Sometimes that’s all that really can be said.

The Carmel River, prior to the mid-1970s, was renowned in California for its larger-than-average steelhead. When I was a kid, anglers would come from around the state for combat fishing on the best holes and riffles. Then, a severe drought, increasing diversions to supply water to the Monterey Peninsula, and new residential development in the Carmel Valley tag-teamed to put the river in a choke-hold. 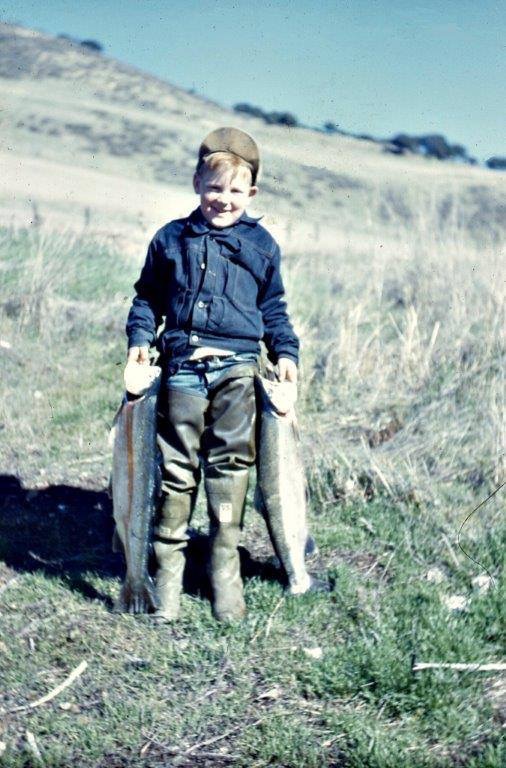 The Carmel’s run of burly wild steelhead has never been the same.

In 1997, the south-central coastal distinct population segment of steelhead, which includes the Carmel River population, was listed as Threatened under the Endangered Species Act. Local anglers with a background in fisheries management, including inaugural members of TU’s Steinbeck Country Chapter, managed to keep the river open for limited angling.

Today, you can fish the lower Carmel River for steelhead from December 1 to March 7, catch-and-release and artificials only, on Wednesdays, weekends and holidays—if the river’s flow is at least 80 cubic feet per second at the stream gage near Carmel Valley Village. In dry winters, like last year, there may not be a single fishable day.

Even in wet winters, like this one, there may be little to no fishing opportunity, as the flow was too high and the water too off-color for most of the season. There’s only a small sweet spot for fishing this water.

Nowadays, in any year, the diminished numbers of steelhead in the Carmel—and extremely limited opportunity to fish for them—give them the aspect of precious jewels. Few had been seen or caught over the past three months in the mainstem river. The behemoth at the bridge was the first fish I’d seen this season.

But others had seen spawning adults in several tributaries. There were photos and videos to prove it. And some of these were ten-pound-plus hogs, too.

Some of these tributaries are dry or fragmented into pools much of the year. 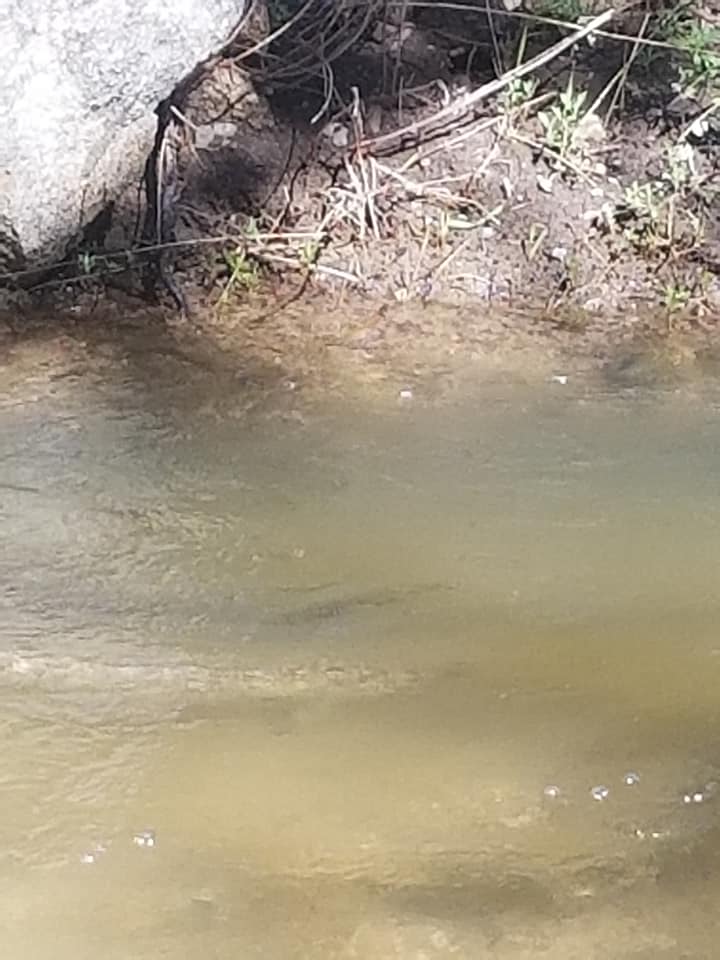 (R) Steelhead spawning in a tiny Carmel River tributary, which is dry much of the year, March 2019. Photo courtesy CRSA.

The Carmel River is a poster child for the importance of small streams that may flow inconsistently over the year for salmonids. Given the tenuous status of many runs of West Coast salmon and steelhead runs across their native range, we should be doing everything we can to conserve such habitats where they are in good shape, and all that we can to restore those that have become degraded or permanently disconnected from their mainstems.

Thus, my serious peeve regarding a current proposal from the Trump administration that would remove water quality protections under the federal Clean Water Act for such streams. You can learn more about this proposal—and how you can weigh in on behalf of our salmon, steelhead and trout, here.

But do it before April 15. That’s the deadline for receipt of public comments on the proposed rewrite of the so-called Clean Water Rule.

Trout Unlimited, through our Central Coast Steelhead Coordinator Tim Frahm and our Steinbeck Country Chapter, has been working for the past five years to reconnect habitat and improve flows throughout the Carmel River watershed. We have a number of terrific partners in this effort, including the Carmel River Steelhead Association, the Carmel River Watershed Conservancy, the Santa Lucia Conservancy and state and federal resource agencies and conservancies.

Our efforts took a huge leap forward with the conversion of a 36-hole golf course to regional park nearly three years ago, which now leaves nearly 98 million gallons of water in the lower river annually. And guided by the recovery plan for the south-central coastal DPS of steelhead, Frahm is methodically developing and implementing barrier removal projects in key tributaries such as Potrero and Cachagua Creeks. 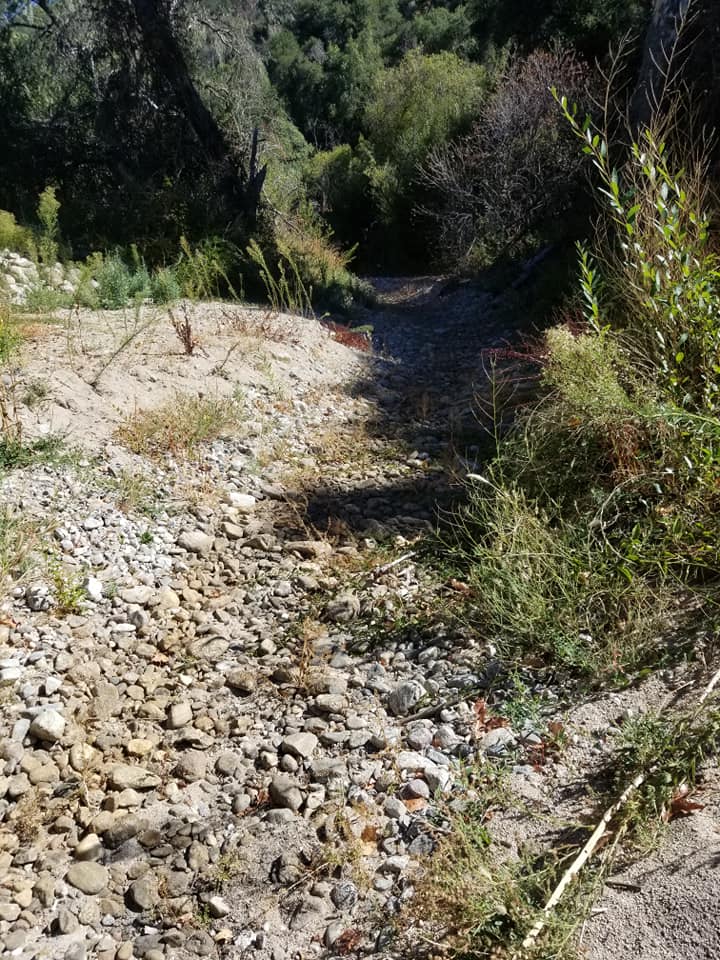 Such progress gives me reason for optimism. And I am not alone—as she departed, my new hiker friend at the bridge said, “Seeing that fish makes me so happy…I just have this feeling of hope now.”

While the Carmel River’s steelhead run may never again be what it was when I was a lad throwing Daredevil spoons at silvery shadows, it seems very possible that the population can come back to the point where the fate of an individual fish is not quite so critical.

In the meantime, a single fish such as the giant I and my new hiker friend watched the other day will continue to provide a big dose of awe and gratitude for those lucky enough to distinguish it from a stick.

Sam Davidson is TU’s communications director for California and Oregon. He vows that one day he will actually catch a Carmel River steelhead.