After the first couple of hard-earned, bushwhacked miles, about the time we had fished every inch of beautiful holding water in this wild, remote river, and just after we finished post-holing our way through a couple hundred yards of thigh-deep snow, I started to second-guess myself.

Months of reviewing fisheries and habitat data and countless hours spent poring over maps and aerial photographs had led us to this point — we were finally on the banks of a river I felt should have steelhead, but after the aforementioned bushwhacking, postholing and fishing, we had seen and documented exactly zero steelhead, and it didn’t feel as if that was changing anytime soon.

Was this all a boondoggle? A wild goose chase? Had I wasted the time, effort, and financial generosity of the TU staffers and donors accompanying me on this quest to find new steelhead habitat in Alaska’s Tongass National Forest?

Standing on a gravel bar miles from civilization and watching the formerly enthusiastic faces of the staffers and donors cloud with doubt, I could feel the acute weight of the previous few months of planning and trip prep and couldn’t help but wonder silently to myself, “Have I made a huge mistake?”

Day 1 of the Trout Unlimited 2018 steelhead survey ended with us drawing a blank. Roughly three miles of very fishy habitat had been thoroughly searched and fished, poked and prodded, and the only data we had collected was a big fat zero on the steelhead count sheet.

As we made our way out the valley to the pickup rendezvous, I tried to reassure the others that we had a few more watersheds to look at, and some of the other places had a high probability factor for steelhead, but the nagging doubt remained … would we be successful in documenting previously unknown steelhead habitat in the Tongass National Forest?

After a long float plane flight back to Juneau, a hurried meal and a handful of Ibuprofen, I turned in for the night with one last thought — tomorrow. Tomorrow we’ll find the fish and all of this will be worth it.

Much has changed since that initial foray into the vast landscape of southeast Alaska, but not the bushwhacking or second guessing, that still happens.

Following the initial disappointment of a fishless day, we went on to gather enough data to document steelhead habitat use in two watersheds that same week. Through the work of the Fish Habitat Project, we have gained state recognition and conservation measures for six “new” steelhead streams in the Tongass, but in many respects, this work has really just begun.

According to the Alaska Department of Fish and Game (ADFG), 325 of Southeast Alaska’s 5,000-plus anadromous waterways are officially recognized as supporting annual escapements (or runs) of steelhead. The “officially recognized” part is key, as this means inclusion in the ADFG Anadromous Waters Catalog (AWC). Alaska law requires the ADFG to specify the various waterways important for spawning, rearing or migration of anadromous fishes. The AWC is used to make this specification, and it consists of a numerically-ordered list of the water bodies with documented use by anadromous fish for these purposes.

The data included in the AWC shows the location, name and number of these specified water bodies, the anadromous fish species using these water bodies, and the fish life history phases for which the water bodies are used (to the extent known).

Protection of these specified water bodies is addressed by Alaska law as well, which requires persons or governmental agencies to submit plans and specifications to ADF&G and receive written approval in the form of a Fish Habitat Permit prior to beginning the proposed use, construction or activity that would take place in specified water bodies.

Inclusion in the AWC doesn’t put the stream off limit for development – rather, it creates a system that makes sense for developers and fish. In many cases, timing windows are used to limit when in-stream disturbance can occur so this it doesn’t happen during sensitive times for fish, such as during migration or spawning.

For steelhead, this is from roughly March through late July, as this is the time when adult steelhead remigrating into freshwater to spawn and when their eggs are developing in the streambed. Similarly, if development is proposed in an area where ADF&G knows anadromous fish are present, the Division of Habitat will survey the area repeatedly to determine if fish rely on the section of the stream or river that is proposed for the project. If critical areas are identified, they are avoided.

Long story short, if a species isn’t included in the AWC for a particular water body, there are no protections afforded that species, and therein lies the rub: to conserve steelhead and their habitat in a waterway not listed as supporting them in the AWC, proof of their existence needs to be carefully and accurately documented.

You can understand why finding these fish and getting new waters added to the AWC is so important. After the “swing-and-miss” of the first steelhead expedition in 2018, the Fish Habitat Project has gone on to document habitat use by salmonids in 15 newly-documented anadromous streams and add to the species assemblage of an additional 15 streams and one lake in Southeast Alaska. In addition to steelhead, the project has documented habitat use by Dolly Varden char, cutthroat trout, and pink and coho salmon as well. All told, the Fish Habitat Project has documented anadromous use of more than 215,000 feet of habitat — over 40 miles of streams.

As a long-time steelhead enthusiast and flyfishing guide in Southeast Alaska, I have had the opportunity to chase these fish in many of their known waterways, as well as several places they didn’t “officially” exist. From this experience the idea of TU getting a group together and exploring previously undocumented steelhead streams was born, and the perfect starting point was deemed to be the streams of the Tongass 77 that had all the look and feel of steelhead producers yet were not listed as being such in the AWC. The Tongass 77 is a suite of high-value watersheds in the Tongass National Forest that, through the work of Trout Unlimited’s Alaska Program, has gained important conservation measures to safeguard their contributions to the $1 billion salmon economy of Southeast Alaska.

Due to ADFG budget cuts in the last decade, most steelhead research and data collection in southeast Alaska has been severely curtailed or eliminated outright. In this void, the idea of community science takes on a particularly important role — conservation measures for the undocumented steelhead populations of the Tongass are important and necessary, but if ADFG was unable to survey likely areas to add them to the AWC, the habitat would go unprotected and our extant knowledge of their populations would be left incomplete … which brings us back to the crisis on the gravel bar.

Mark Hieronymus is the science coordinator for Trout Unlimited’s Alaska Program. Mark and his impressive beard spend their work hours adding to and advocating for the salmon resources of Alaska, and their coffee breaks staring at pictures of fish they have met over the years.

Monday, Oct. 19 — Helen Neville, Trout Unlimited’s senior scientist, talked about how science is used by TU across the country on Instagram Live. We also released a blog from Helen explaining how science makes conservation credible.

Wednesday, Oct. 21 — Wednesday, Oct. 21 — Steve Moyer, vice president of government affairs at Trout Unlimited, was on Instagram to talk about the role science plays in the organization’s efforts to engage in policies important to our mission. For example, EPA officials said mapping of ephemeral streams could not be done, but TU’s Kurt Fesenmyer of the TU Science Team proved them wrong and showed how numerous the important “part-time” streams are across our country with GIS mapping technology. A story was also posted on the national TU website.

Thursday, Oct. 22 – Our second science film premier of the week is called “Anadromous Waters” and features the impressive work of TU staffer Mark Hieronymus as he seeks to find Alaska rivers not previously documented as holding steelhead and salmon. The state estimates only half of the waters holding anadromous species have been identified. Hieronymus will be joined by filmmaker Josh Duplechian on Instagram Live at 6 p.m. ET. The film will launch at 7 p.m. ET. Hieronymus will also write about his work in a blog released that day.

Friday, Oct. 23 — The TU Science team includes staffers with backgrounds outside the realm of traditional research science. Community science efforts take place around the country. Jake Lemon, TU’s eastern angler science coordinator, works with volunteers and partners on various projects, including deployment of Mayfly Sensor Stations, which TU member volunteers set up to provide real-time access to current stream conditions. Jake will be on Instagram Live at 3 p.m. ET. to talk about Mayfly Sensor Stations and other technologies being used for conservation work in the East, including volunteer stream monitoring programs, sampling eDNA to identify undocumented wild trout populations and using drones with infrared sensors to map stream water temperatures . 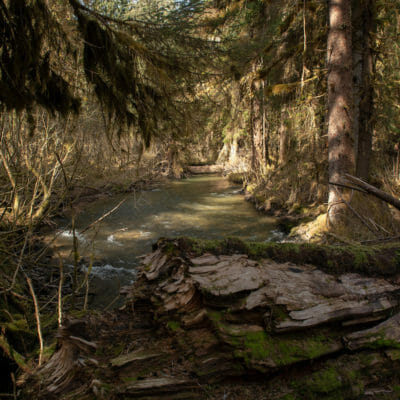