A few years back I saw a post on one of my social media feeds from a guy I know named Gabe. It was an image of a letter he had written to his mother from Salmon, Idaho, when he was a kid.

This short note to a distant mom—with affection appended almost as an afterthought—made a big impression on me. I was struck in particular by its precocious focus on fishing for trout.

Even if I didn’t know that Gabe regularly finds success fishing for native redband trout and steelhead on his home waters of central Oregon, I would have guessed as much just from his note. All the signs of a lifelong obsession are there.

Gabe’s fishing obsession has evolved into an intriguing life-work proposition. A few years back, looking to hone his fly fishing skills and contribute to local stream conservation, he got involved with his local TU chapter, the Deschutes Redbands Chapter #552. Here’s what that led to, in Gabe’s own words:

“Seven years later, thousands of hours, a few bumps and bruises, and some extraordinary encounters later – I sat on my couch with my dog Dannyboy and thought to myself ‘Why not give this a shot for a year? Just go out and do what I do – meet people, help tell their stories, and provide my skills in graphic design/layout/social media/web development to them and all from the road?’” 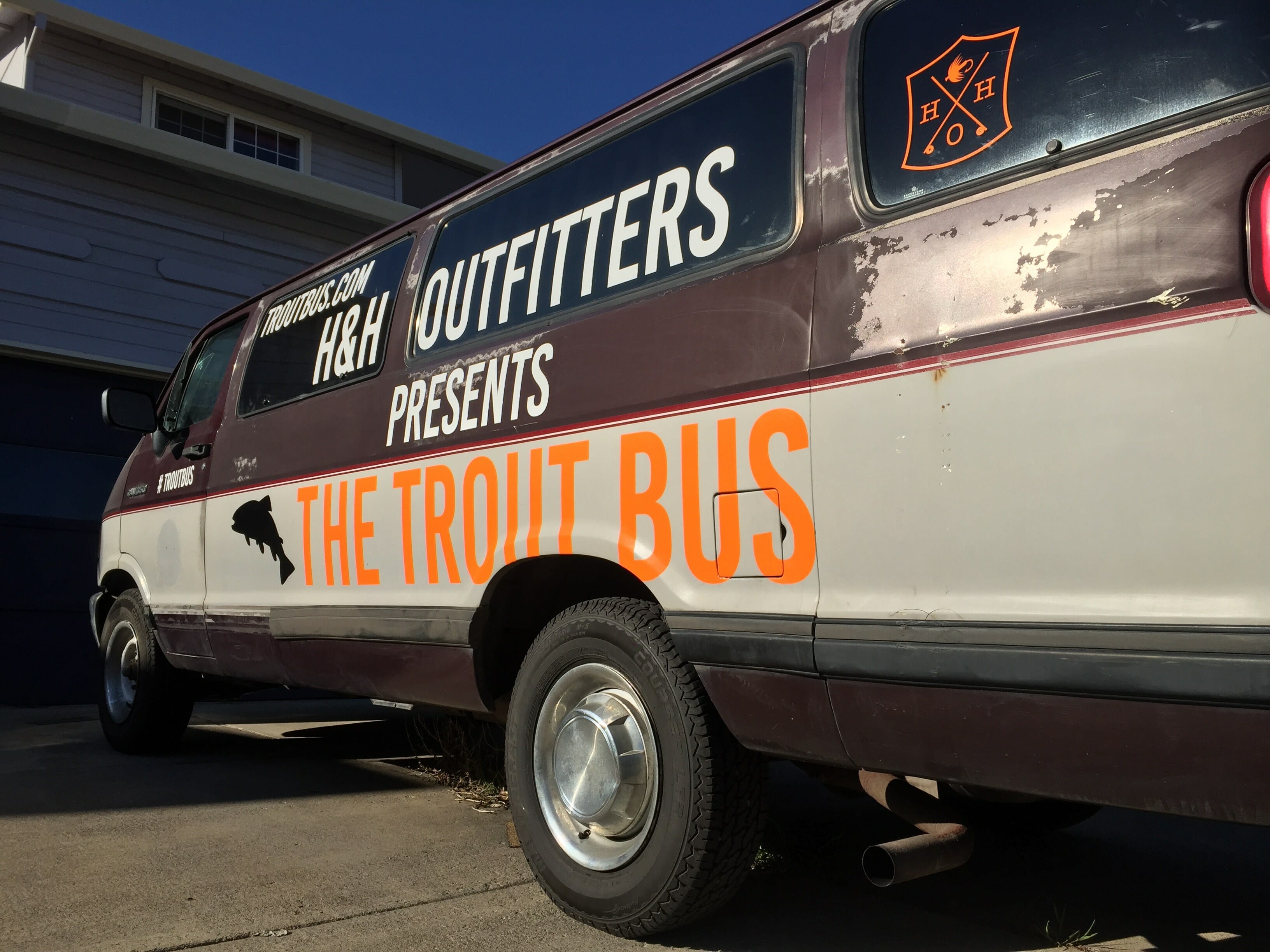 “This” became the Trout Bus, a reconstituted extra-long Dodge Ram van, Gabe’s sometime home and office, in which he “hit[s] the road and use[s] photos/video/writing to create a broader awareness of the local issues that our communities face when it comes to conservation of our resources, the successes that occur, and the collaboration it takes to succeed.”

The Trout Bus has its own website and blog (“We all need cold clean water”), where you’ll find deep dives into diverse subjects such as fishing the legendary salmonfly hatch on the Deschutes, attending a regional meeting of TU’s grassroots and staff in Wyoming, the importance of public lands and how the time we spend in solitude on a river actually brings us closer to other people.

In fact, Gabe’s love of public lands and dedication to advancing the cause of their conservation spawned another website, publiclandsproud.com, which sells cool stuff and amplifies content from TU and other organizations working on protecting our public lands.

The fourth Saturday of September has the distinction of being both National Fishing and Hunting Day and National Public Lands Day. This month, as in 2017, TU is celebrating our public lands with a series of posts on our blog and social feeds and local volunteer-driven events to increase public awareness of public lands and water for habitat and fishing and hunting opportunity.

It’s inspiring to see how fishing for trout—which, if we are being rational and unbiased, are the most beautiful of all freshwater fishes—has shaped the lives of people like Gabe and taken them to places from which they return as committed to stewardship as to use of the resource.

It’s also kind of comforting: at least I am not alone in living a life whipsawed this way and that depending on hatches and streamflows.

Gabe’s story also has familiar origins. His grandfather taught him to fish and shoot. That’s how I got exposed to fishing and hunting, too. I know many of us got our feet wet, so to speak, in that way.

Engaging the next generation of sportsmen and women in our fishing and hunting legacy never goes out of style—or diminishes in importance. Virtually all of TU’s 400-plus chapters across the country are invested in youth education and fishing instruction in some way. The efforts of TU’s grassroots in California over the past year offer a snapshot of how this investment plays out on the ground and in local communities. 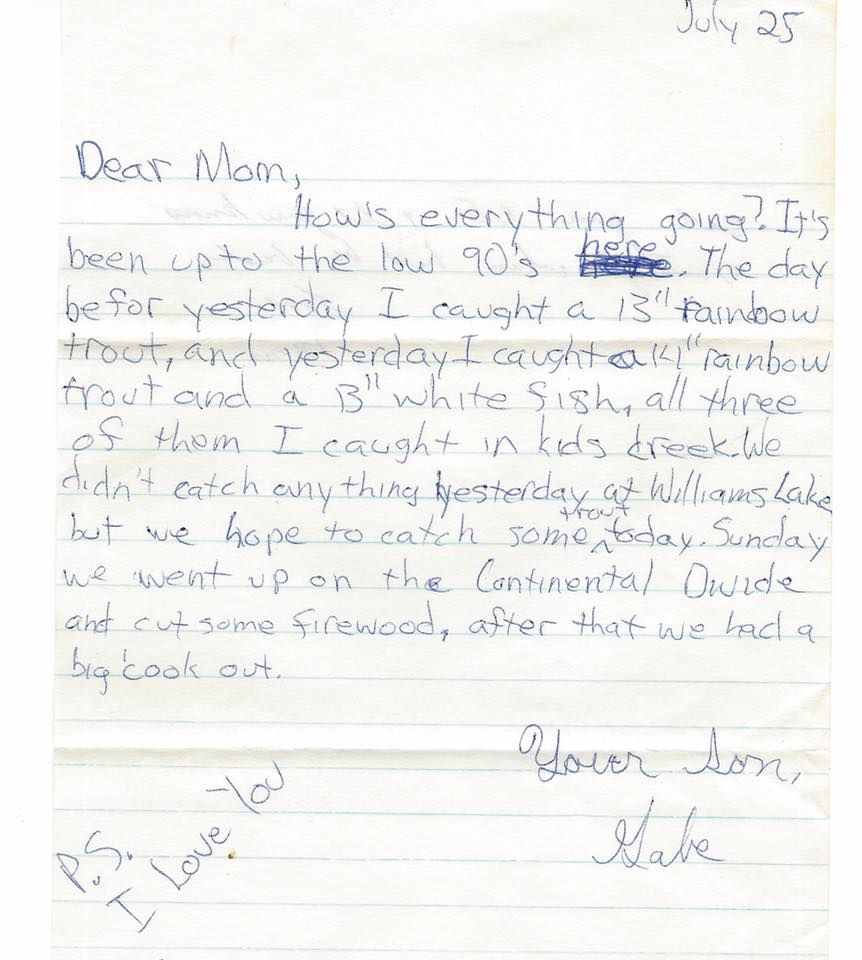 When I asked Gabe if I could share his letter in another forum at some point, I neglected to ask him how old he was when he wrote it. From the diction you might imagine he is a pre-teen. But it doesn’t matter. You can tell he is young and exploring the range of his abilities—and beyond stoked on fishing for trout.

Ay, there’s the rub. You can’t be that stoked on trout, and fishing for them, and not fish. But trout live only in cold, clean water. Such waters are becoming rarer and more precious in the face of a warming climate, persistent drought and unrelenting development pressures.

If you want to fish, nay, must fish for trout, you know what you have to do. Get on the coldwater conservation bus.

And take a young person fishing. That’s how it starts. And maybe you’ll get a grateful note from your kid, or one you mentored, from some western landscape hard by a productive trout stream, out of the bargain.

Sam Davidson is TU’s Communications Director for California and Oregon. He learned to fish for trout on Idaho’s Big Wood River and on his home water, the Carmel River, on California’s central coast.