It was bright blue when I first crawled into it as a 12-year-old kid. Its paper-thin nylon hardly seemed sturdy enough to stop a breath of wind, let alone protect its occupants from whatever it was that wandered the woods at night. That

wispy little barrier, though, provided real emotional security for a boy about to sleep on the ground, generally in the middle of nowhere.

And I could still hear the creek rolling over time-worn stone just a few hundred feet away.

Those were the best nights, tucked into that little two-man tent, bundled in a sleeping bag, one of my brothers invariably tucked in next to me in a similar state. Drifting off to the sound of water flowing nearby was a heavenly distraction. I slept like old Van Winkle, sometimes missing breakfast altogether. I’d finally wake up when the sun hit the blue nylon, eventually turning the tent into a portable sauna. I’d shed my sleeping bag and lie there for a bit and watch as, inevitably, some mountain insect would light on the tent and crawl around atop it. The fabric was so thin that I could see the silhouettes of the bugs through it—the mandibles on black ants, or the antennae of every beetle that landed. And, of course, with it being bright, columbine blue, fat bumble bees would wander by, just to make sure they hadn’t discovered the biggest flower in the Rockies.

I’d finally crawl out of the tent—my family took to calling it Old Blue—to be greeted by the jeers from brothers, uncles and cousins. Apparently, I was sleeping the day away, wasting my camping trip by laying about. I’d just grin, rub the sleep out of my eyes and then look around for my fishing rod and my little Styrofoam tub of nightcrawlers. I’d grab a strip of cold bacon, my fishing creel and my canteen and wander off to the water.

“I’ll bring back firewood,” I’d say, just to make sure everybody knew I was pulling my weight.

I’d fish all day, sometimes joined by a wayward cousin or a brother, or the inevitable “check-in” from an uncle or two, just to make sure I hadn’t fallen into the icy waters of Elbert Creek and disappeared under a rootwad or something. And when I was done, I’d start to retrace my steps through willow bogs, over little humps and bluffs along the creek and through the woods. It was during these early trips to the mountains that I realized just how far I ranged when I was fishing—it’s something I still do to this day. I just fish and walk. Fish and walk.

After what seemed like hours, I’d crest a ridge or round a bend in the creek, and there, under the late afternoon sun, I’d see Old Blue. She was a welcome sight, even though I knew I’d have to tighten her ropes or adjust her stakes just to keep her from sagging in the middle of the night. But there she’d be, bright blue against the mountain green. A beacon for the weary angler. 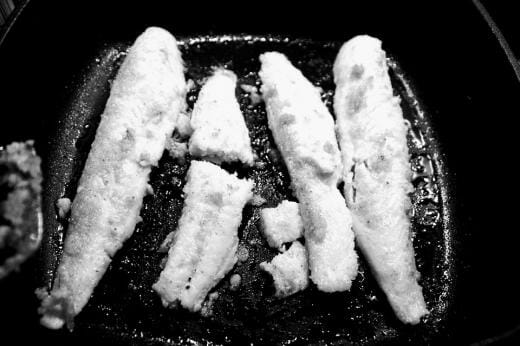 alt=”” title=”” />I’d start gathing an armload of firewood and when I showed up, I’d show my grandfather or my uncle my limit of cleaned trout. They’d gather them up with the catches from the rest of the family, and within half an hour, we’d all be sitting around the fire ring on a collection of logs, rocks, beat up old camp chairs or the tailgate of my granddad’s old pickup, dining on white-fleshed rainbows, or the reddish-pink meat of brook trout and a couple cans of Ranch Style beans spread haphazardly on paper plates. The uncles and my granddad—who could do amazing things while wandering around camp with an unfiltered Camel between his lips and halo of smoke around his head—would have broken out the beer, or if it was later and chillier, they’d pass a bottle among themselves.

Soon, the rigors of the day—these were the best days… ever—would catch up with the kids, and we’d wander off to our tents. The older guys would sit around the fire until it died, talking, joking… sometimes, we’d eavesdrop, and when we laughed at their jokes, we’d earn those time-worn admonishments: “Go to sleep. And don’t tell your mother!”

I’d lie there in the nylon belly of Old Blue, one of my brothers snoozing next to me, and listen to the creek move by. I’d drift off into the best sleep ever.

I hung on to Old Blue for years. It even survived the first few years of my marriage until my wife simply refused to crawl into it. By then, the bright blue fabric was a faded cyan, and it had been patched and repatched. The flimsy aluminium poles had been replaced by sawed-off broom handles, and the seams were held together with duct tape and determination. Late one evening, as my wife and I prepared to leave Colorado for a job in northern California, I delivered Old Blue to the local Goodwill.

I dropped her off at the back door and left her, hopefully for a little TLC and maybe a brighter future for some other kid whose heart beat stronger and lungs filled fuller when when he breathed in high-country air next to trout water. 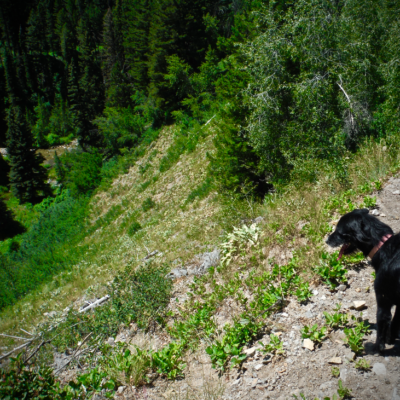 Voices from the River: Fishing dogs