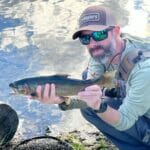 After more than a decade of work, the greenback cutthroat trout is now reproducing in its native range

Seven years ago, on a cool mid-September morning, I joined other Colorado Trout Unlimited members and Colorado Parks and Wildlife (CPW) staff at a 10,000-foot trailhead to Herman Gulch, a stream located in Arapaho National Forest west of Denver.

We had gathered to begin a multi-year effort to restore a wild population of Colorado’s state fish, the greenback cutthroat trout, in its native range in the South Platte River drainage. Normally, this is a hiking destination requiring a six-and-a-half-mile roundtrip to Herman Lake along the Continental Divide Trail, but we were there because the small stream that runs through the gulch was identified by CPW as a prime location for reintroducing greenbacks.

The greenback was declared extinct in the 1930s. However, small populations were thought to be found in the 1950s, 1960s, and 1970s, which led to listing on the endangered species list. Intensive efforts to reintroduce those fish were made in the 2000s, before they were found to be of Colorado River cutthroat ancestry. Then, in 2012, in a small stream in the Pikes Peak region named Bear Creek, a genetically pure strain of the greenback cutthroat was re-discovered. The trout were believed to be stocked there, outside their native range, as part of a “tourist fishing enterprise.”

The first step toward reintroducing the greenback to Herman Gulch was a trout salvage, as there was a strong population of other cutthroat trout reproducing there. So on that day in 2015, we were allowed to fish the tiny creek and transport the fish back down the trail into the adjacent upper Clear Creek. With buckets and oxygenated backpacks, we successfully transported approximately 100 trout that day.

CPW returned two more times with electroshock equipment, and overall, successfully transported approximately 400 fish to their new downstream location. CPW then completed a chemical removal of any remaining fish that had not been relocated.

The following year, with the habitat clear and ready for native trout sourced from the genetically pure Bear Creek strain, I returned with other TU volunteers to reintroduce the first greenbacks into the stream. CPW provided fish from various state hatcheries and transported them to the location via a specialized truck.

Carrying large backpacks filled with younger-of-year greenback cutthroats, we ventured miles up the difficult trail. The first few miles of the Herman Gulch trail climbs at an extremely steep rate, but spirits were high, and the pace was fast. Upon reaching an open area of the gulch, we were assigned areas to release our fish.

After letting the bags equalize with the cold temperatures of the stream, we watched as those young fish entered their new home. Approximately 4,000 hatchlings were carefully introduced to the stream that day.

However, in 2017, the reintroduction strategy changed. Rather than reintroducing hatchlings, we transported nearly 1,000 year-old fish and approximately 10,000 young-of-year. In 2018, we again transported about 900 year-old fish into the gulch. CPW continued to stock greenbacks into the stream for an additional year and has conducted ongoing monitoring.

This September, CPW announced that its monitoring had documented continued growth of the fish— some reaching 12 inches—but most importantly, they documented for the first time successful reproduction of the greenback cutthroat in Herman Gulch.

“Our team of field technicians literally high-fived right there in the stream when we captured that first fry that was spawned this year,” said Boyd Write, CPW Aquatic Biologist. “When moments later we captured a one-year-old fish produced in 2021, we were truly beside ourselves. After many years of hard work and dedication, it is extremely satisfying to see our efforts paying off.”

I couldn’t tell you in words how satisfying being a part of this effort was, but today, we need to celebrate all the volunteers.

This effort is only one example of how Trout Unlimited volunteers make a difference in native trout conservation in the state of Colorado and the nation. We, as an organization, couldn’t do these types of projects without your help. This is a project that all Trout Unlimited volunteers should be extremely proud of, so here’s a loud and appreciative standing ovation to all our volunteers. You are a part of something extremely remarkable that generations to come will cherish.