Editor’s Note: This opinion piece originally ran in the Idaho Statesman on Nov. 18.

In his recent op-ed, Kurt Miller, the executive director of Northwest River Partners, an association of businesses that supports retention of the federal dams on the Columbia and Snake rivers, argued against removing the four lower Snake River dams to save gravely imperiled salmon and steelhead in the Snake River Basin. To support his case, Mr. Miller spliced together several pieces of information — some accurate, some not — that ultimately didn’t support his conclusion.

Mr. Miller argued historical commercial over-fishing was the primary culprit behind declines in the Columbia and Snake rivers. He was correct that unregulated commercial fishing caused severe declines in the late 1800s and early 1900s. But as agencies regulated harvest, stocks responded and remained relatively robust, even as the lower Columbia River dams were built. In fact, the precipitous declines in wild Snake River salmon directly mirrored the timing of the completion of the lower Snake River dams.

Mr. Miller also noted that salmon and steelhead declines track recent ocean conditions. The ocean is an important driver of salmon abundance and has been for millions of years. Luckily, salmon and steelhead have developed remarkable life histories that lend resiliency in a highly dynamic freshwater and ocean environment – until the last five decades, when Snake River stocks seemingly approached the limits of their resiliency (in contrast, stocks in tributaries below the Snake River dams have 2-4 times the adults returning from a given cohort of smolts, despite using the same ocean). After more than $16 billion invested to ameliorate the effects of the Columbia Basin hydro system on fish and wildlife, Snake River spring/summer chinook and steelhead are at record low abundances, and sockeye are barely hanging on. Climate change increases the urgency to restore passage.

How many fish do we need to achieve abundant, resilient, fishable levels? A diverse group of stakeholders from across the region, including Trout Unlimited and several members of Northwest River Partners — Mr. Miller’s organization — worked collaboratively over several years to come up with the answer. The group, known as the Columbia Basin Partnership, agreed that for spring/summer chinook salmon, 124,000 naturally reproducing adults in the Snake system would be an appropriate recovery goal. For steelhead, the recovery goal was set at 104,000 naturally reproducing adults. And according to the Columbia Basin Partnership, the Snake has, by a long shot, the greatest production potential for spring/summer chinook and steelhead.

How do we meet these collaborative goals for wild, naturally producing Snake River spring/summer chinook and steelhead and sustain them through fluctuating ocean conditions and a warming climate? Mr. Miller says he supports science-based decision-making, so I ask him to join me in looking at the overwhelming scientific evidence that we need a free-flowing lower Snake River. Multiple collaborative, peer-reviewed, high-integrity scientific assessments that have included tribal, federal, university, consultant and state agency (including Idaho) scientists, have come to this conclusion. As a science-based organization, this is why we support removal of the lower Snake dams as the best way to give these fish a chance.

Helen Neville is the senior scientist for Trout Unlimited. She lives in Boise. 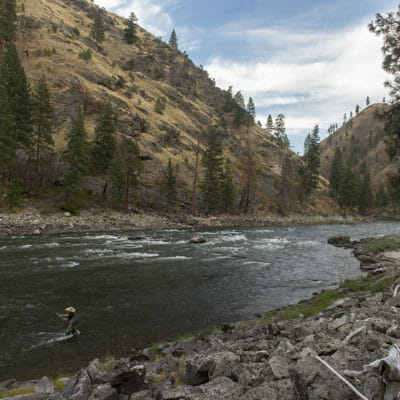