Climate change is a major threat to trout and salmon. Their habitat is quickly changing and there will be a lot less of it in the future. But we still don’t have an understanding of if, or how, these cold-water fish might evolve to adapt to a warmer environment.

Identifying the genetic basis for any adaptation is tricky business. Typically, it involves laboratory breeding studies where scientists look for genetic variation that correlates with a trait — like temperature tolerance — and determine how ‘heritable’ the trait is by studying its transmission through families. Over time, scientists can start to map these genetic variants to locations on specific chromosomes and identify the functions of associated genes. The laborious nature of this process means most of this work has been done in “model organisms” such as yeast, fruit flies or nematodes — critters with short generations that are easily bred in a lab.

Natural populations, especially those of conservation concern, are inherently “non-model,” meaning we can’t do all that snazziness. Luckily, recent advances in genomic sequencing (think Human Genome Project) have opened up new opportunities. With sequencing, we get so much information that we can start to see patterns across an individual’s genome that we can relate to their environment or other characteristics. And with fish, laboratory breeding studies can still help.

A couple of years ago I realized a rare opportunity for a hybrid approach: a semi-model lab experiment, paired with genomic techniques, in what I think is the most amazing trout out there — the Lahontan cutthroat trout.

Many of you probably know something about Lahontans because of the world-record fish from the famed Pyramid Lake. Cutthroat from this desert lake environment are known for rapid growth and tolerance of what most trout would consider pretty fringe habitat, including high temperatures. You might even know that Pyramid Lake Lahontan cutthroat trout were lost in the 1940s, but Don Duff, a Trout Unlimited/Forest Service biologist, found a population of the fish in a tiny stream in western Utah – not historic range for Lahontans.

The trout were verified to be Lahontans from the Pyramid-Truckee-Tahoe system in Nevada and California. Since 1995 these fish have been reared at the U.S. Fish and Wildlife Service’s Lahontan National Fish Hatchery in hopes of recovering some of the original genetic characteristics of Pyramid Lake Lahontan cutthroat trout, including its tolerance for high temperatures. These hatchery fish are called the Pilot Peak broodstock.

In this new study, we capitalized on a 2008 study by a graduate student from the University of Nevada Reno, where individuals from the Pilot Peak broodstock were tested for their thermal tolerance in a lab setting. Luckily, there were still tissue samples stored at the university from these same individuals, so we could apply modern sequencing techniques to individuals with previously measured thermal tolerance.

We also compared fish from the only two remaining native lake populations of Lahontan cutthroat trout, from contrasting thermal environments: those from Independence Lake living at high elevation in the Sierra Nevada mountains and the Summit Lake variety from the remote reaches of the Blackrock Desert. Together, these two lakes represent only 1 percent of the historical lake habitat for Lahontan cutthroat trout.

We thought that, if we uncovered genetic variants related to temperature tolerance in the tested individuals from the Pilot Peak broodstock, we might see differences in these genetic variants when contrasting fish from the two native lakes from a cooler and warmer environment.

In the end our results were not quite as compelling as hoped (such is the nature of science), in part likely due to the fact that Lahontan cutthroat populations are so small (and the Pilot Peak broodstock have been transplanted multiple times and reared in a hatchery over decades) that they have lost a lot of their historical genetic variability. We did uncover a reasonable suite of genetic variants in the Pilot Peak broodstock that were related to measured thermal tolerance. Using the above-mentioned genetic linkage (chromosomal) maps, available for rainbow trout, we also searched for genes physically near these variants and queried databases for any known functions.

Not all genes were “annotated” with a known function, but those that were related to immune response, growth and metabolism, protein assembly, cardiac function, the maintenance of cellular ion concentrations, and anaerobic resiliency. We know body size is related to thermal tolerance and that growth (aka protein assembly) and metabolism in fish are thermally-mediated. Immune response is also influenced by temperature, as is cardiac function (which is where the ion function comes in to play). And as water warms up it loses oxygen, so anaerobic resiliency is important in a warmer environment. So, these results make sense. They also demonstrate the complex-nature of physiological responses to temperature.

Interestingly, the two native lakes did have genetic patterns that could suggest adaptive differences to their environment. But none of these variants were the same as those found in the analyses of the Pilot Peak broodstock.

What does all this mean? To use perhaps the most common adage in biology, “It’s complicated.” And there remains a lot more work to do to understand the full genetic basis for thermal tolerance in trout and other salmonids.

On that basis alone, it provides an important foundation for future work for species of conservation concern. Our results also demonstrate there is still variation in these populations that could respond to temperature in the future. For Lahontans, this is a step forward in beginning to understand the potential for the lake ecotype, now largely extinct in the wild, to adapt to a changing climate.

Helen Neville is the senior Scientist for Trout Unlimited’s Science Team. She is based out of Boise, Idaho. 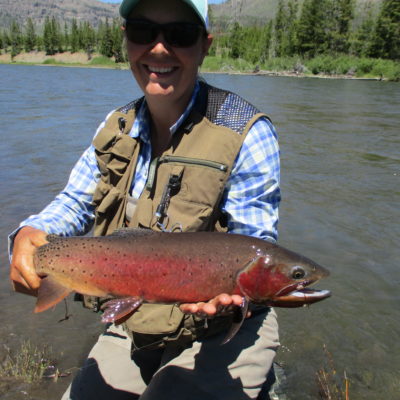 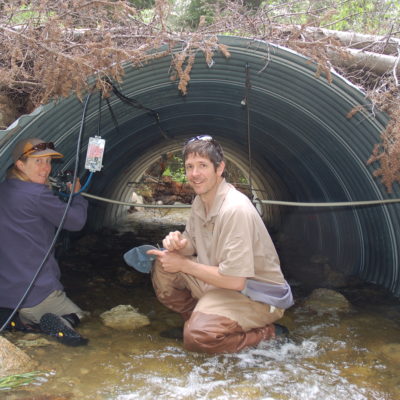