America has such a well-earned reputation for innovating our way out of problems that we sometimes miss the obvious natural solution.

In a series of open houses this summer in Great Basin communities, the Trump administration revealed a plan to reduce wildfire risk by constructing 11,000 acres of fuel breaks across public lands in parts of Idaho, Oregon, Washington, California, Nevada and Utah.

The plan would create vegetation strips by clearing the land with bulldozers, repeated mowing or clearing and replanting with fire resistant vegetation. The cost would be roughly $125 million. Annual maintenance costs range from $18 million to $107 million — per year.

Nearly everyone agrees that Western rangelands will produce even larger and more frequent wildfires in the future. But are engineered fuel breaks the best answer?

Jack Williams, a scientist who worked for multiple federal agencies and Trout Unlimited says, “The primary culprit for larger fires in the Great Basin is cheatgrass, but warming temps compound the problem. Creating periodic firebreaks would help by breaking up and slowing down the flames. We can do that in a way that benefits the natural systems by expanding riparian and wet meadows along our small streams.”

The answer may be a small dose of much less expensive firebreaks and, surprisingly, strategies involving cows and beavers. Ranchers who fence streamside areas and/or rotate cows to rest pastures occasionally and allow streamside vegetation to grow back help re-establish natural firebreaks of lush green vegetation.

Consider the case of Susie Creek near Elko, where the Heguy family runs a large ranch. Over 25 years, they changed grazing practices so that the cows were moved more frequently, especially away from the streams. An evaluation by Trout Unlimited scientists showed riparian vegetation in the entire Susie Creek Basin increased by more than 100 acres. Equally important is that 25 years ago no beavers lived on Susie Creek; about 140 beaver dams cross the creek today, slowing runoff and keeping more water upstream.

When Trout Unlimited evaluated the effects of this type of “conservation grazing” and beaver at larger scales, across several Great Basin watersheds including Susie Creek, the increased wet streamside habitat was equivalent to the effects of adding 10 inches of annual precipitation. That’s nearly double the current precipitation at some sites — a big deal in this semi-arid desert.

The more water retained in the streams, the more drought and fire-resistant the land around it becomes, plain and simple.

I planted hundreds of willows on my small stream in West Virginia several years ago, and a neighbor called me a “willer lover from the city.” He wasn’t wrong, and my love for willows is because they help to retain water in a stream. And the more water in a stream, the more drought and fire-resistant the land around it becomes.

The basic functions of a healthy watershed are to catch, store and slowly release water over time. Gifford Pinchot, the first chief of the U.S. Forest Service, once testified before Congress by pouring a glass of water over a wooden desk and watching as it all ran on the floor. He said this represents an unhealthy watershed.

Pinchot then put the desks’ ink blotter — something designed to absorb the ink of pens — on the desk and poured another glass of water. The water absorbed into the blotter and only a few drops hit the floor. This is how a healthy watershed functions, he said.

Beaver dams are akin to Pinchot’s blotter. Their dams keep water from running off downstream. Water can then percolate into the groundwater around the stream. Green vegetation grows. Trees provide more shade and structure to the stream. Sedges begin to crawl upslope. The beaver dams facilitate late-season flows, which is good for fish — and people, too. Improved flows and wider wetland vegetation translate to strong fuel breaks from wildfire.

The result of sustainable grazing, beavers and other restoration practices that help to heal rivers and streams? Natural fire breaks, at much less cost and at a higher social benefit than 11,000 acres of constructed fuel breaks, which disturbs more soil only to drive greater densities of cheatgrass to fuel future fires

The writer Wendell Berry would liken the Trump administration’s approach to a “hellish symbiosis.” The “kind of solution which immediately worsens the problem it is intended to solve, causing a hellish symbiosis in which problem and solution reciprocally enlarge one another, as when the problem of soil compaction is ‘solved’ by a bigger tractor, which further compacts the soil, which makes a need for a still bigger tractor and so on and on.”

Berry’s counsel, and our own work with partners such as local ranchers and the BLM, suggest the Trump administration might better invest in improved grazing practices, recovery of meadows and streamside areas and other natural restoration practices as an antidote to unnaturally intense rangeland fires. It will cost less. Fish and wildlife will thrive. And, of greatest importance, communities will be safer.

This essay was first published in the August 25, Las Vegas Review Journal. 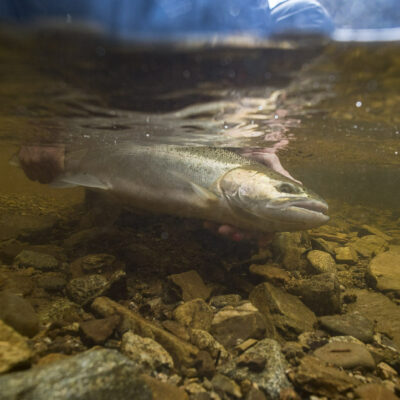