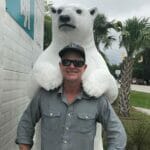 I first met Fred Hodge over a decade ago, when I was still new at TU and was on the road all the time, meeting chapter and council leaders and listening to their stories of teaching and mentoring kids.

Fred and other Oak Brook TU members had a booth at a huge outdoor show in Chicagoland, and I spent the weekend passing out free cane pole rods, chatting with families, and helping the OBTU members run fly-tying lessons for anyone who wanted to learn.

We have all seen a so-called “people person” in action, the one in the crowd who has never met a stranger and finds energy and purpose by interacting with others. Fred Hodge undoubtedly fit that bill, but the source of his joy, the proverbial wind in his sails, came from being around kids. At the OBTU booth, Fred would light up when anyone under the age of 16 or 17 approached the tying stations. He had one of those smiles that took possession of his whole face, and kids just took to him right away. It was magical to behold.

Fred was a patient teacher and a passionate volunteer with a wonderful sense of humor and a love of all things TU. It’s little wonder that he won the national Youth Education Award in 2010. In his nomination, OBTU member Greg Prosen called Fred a “virtual Pied Piper of children’s fly fishing activities.”

Originally from Michigan, Fred served as a lieutenant in the U.S. Air Force before going to work for United Airlines where he would log nearly 14,000 pilot hours. After retiring from United, he volunteered his piloting skills to fly critically-burned children from Chicago to a special facility in Cincinnati.

Fred was involved with Scouts from an early age, rising to Eagle Scout as a teen. This background with scouting would later become one of the ways he would shine as a TU volunteer: he served on the committee that created the BSA Fly Fishing Merit Badge, then went on to teach the badge program to tens of thousands of Scouts at regional jamborees. He was, in a word, tireless, at the tying bench, teaching Scouts all day long for up to 10 days at a time. That same commitment made him an all-star volunteer at the Illinois Youth Fly Fishing Camp, where every camper wanted “Mr. Fred” to be his or her mentor. Fred also established fly fishing programs at the Scouts’ Sea Base in Florida, Canoe Base in Minnesota, and Philmont in New Mexico.

To say Fred Hodge made a huge impact on the lives of young people is an understatement, and you would be hard-pressed to find another TU volunteer who did more to foster a love of fly fishing and fly tying in the next generation. He never quit. Right up until his death on Aug. 28, Fred was involved, attending meetings and trainings. He also never stopped smiling and reminding me of why I do the work I do.

As others pointed out in their remembrances, Fred had a way of making you feel like you had known him your whole life, that you had been friends with him forever. Countless young folks certainly felt that way.

Fred, we will miss you dearly. You so completely embodied the selfless service that is the heart of TU. See you on the river someday.

Franklin Tate directs TU’s Headwaters Youth Program. He is based out of Asheville, N.C.