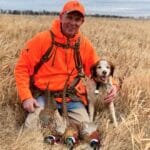 There are any number of wonderful surnames for the moving waters we fish.

River and creek come to mind first. Most of us have fished both. While certainly commonplace and perhaps even a bit pedestrian, the mere utterance of either word stirs something down in a trout fisher’s guts: the sound of water rushing, the smell of meadow rising, the feel of stones rolling underfoot.

There are others though. Each of these colloquials dig even deeper in its own way, and I have fished them all: branch, fork, runandbrook.

But have you ever fished a crik?

In the parlance of my native southwestern Wisconsin, that’s what we called flowing waters that couldn’t float a canoe. Words were stingily doled out there, and when they were, why waste energy on that long ee when a short i would do?

Where’s Tommy? Down by the crik again.

B.C. (Before Car, or more specifically in my case, before a driver’s license allowing me to borrow our one family station wagon), trout forays were powered by the pedal when it wasn’t an evening or weekend excursion when Dad wasn’t working.

Spincast rod tied to the frame of my Schwinn and knapsack tucked with meager tackle and a container of crawlers dug in the garden or snatched in the yard on a rainy night, the “town criks” within an hour’s bike ride—with first names like Bushnell, Buckskin Hollow, Sylvester, Smock Valley and Zander—provided boyhood adventure aplenty.

The better and best criks were for evenings and weekends, when Dad and I would drive 15 or 20 miles, and often 30 or 40 or more, one way. These criks are too numerous to name, but you can find them on a map.

In true father fashion, Dad always sacrificed by letting me work upstream, my preferred approach, while he would amble down.

To be honest, my trout fishing probably reached its first zenith during my college days.

There were evenings when I was home from school for the summer, and Dad and I would head out for an hour or two of fishing after work—mine mowing lawn and tending flowers and digging graves at our town cemetery—and before supper. The light of day’s end seemed to last forever even after the sun dropped behind some bluff to the west and we would fish it out in the twilight.

Then we would sit on the tailgate and listen to silence of a midsummer night coming on in the coulee, saying nothing and watching the alpenglow to the west as stars twinkled behind.

I wish I had thought more then about what that all meant, and what questions I could have asked him.

Even though I have no religion, I have religiously kept fishing journals, which may be a form of religion after all. And while I could enumerate for you every excursion and every trout caught in my life, the only data point that matters for this story is the wane of my trout fishing.

Life called. A move to the city. A “real” job. Raising a family. Busy-ness. 10,000 lakes and a boat with which to ply them. No creeks a bike ride away or a drive down the road on a summer evening.

While there was still good water within a decent drive east into northwestern Wisconsin or south into Minnesota’s own magnificent Driftless, my journals could tell you of some voids of an entire year without trout fishing in them.

Then a friend intervened.

Anthony and I are bird hunting buddies. He grew up on the prairie, and unlike me who was born in hill country with cold water, he became a trouter at the about the age when I went lackadaisical.

To kill an August weekend before bird season, he talked me into a weekend on small water.  We camped. We sweated. We got bit by bugs. We parted jungles of tall meadow grass and navigated thickets of redwillow to get to the gurgle of springwater.

It was a grand old time.

And we caught yellow-flanked browns and even some red-bellied brook trout whose heritage could trace to the ice age before the one that skipped this country of limestone and bluffs.

I could try to wax poetic about what had stirred inside me. But you get it. It was simple: I had missed trout fishing, really missed it, and had been reintroduced at a time of life when I could maybe squeeze another outdoor passion into a year outside.

I ran down for another day of fishing before that bird season. Spent the winter retooling gear and studying maps and reading stream reports and dreaming of trout fishing in the springtime sun as much as I did turkey hunting.

The next year it grew, and the next year, more again. I have even discovered trout fishing as a fine way to occupy a couple sunny winter days in those previously “lost” sporting months of February and March. Thank goodness for that on the mind’s calendar when the dog and I come off the bird hunting road in January.

My buddy and I share a stream together often, and I even give him his choice of upstream or down, but sometimes we just hopscotch it… and we might even fish a run or pool together.

The fishing had started in February, and here it was the turn of September. A first run to the prairie for sharptails loomed, and then it would be all birds all the time.

I picked a meadowy crik. The dog snuffled in the grass and wildflowers, chasing butterflies and staying out of the water. She is a good trout fishing dog. The day blustered fall but got better.

The aroma of wild mint, and the taste of it in my mouth. The feel of sunshine on my neck, peeking out now from behind raggedy-white clouds breaking up over the bluffs. Springwater cold and clear and riffling. And trout, browns that would have been better named golds for their autumn flanks a-shimmer in the current and for their worth in my shaking hand.

You could call that day the completion of my comeback. And I would call every water I have fished on this new journey—whether a branch or fork or brook or run—a crik. Or maybe more aptly, down in the roots of who I am anew, where springwater rushes over cobble and where a heart thumps back to boyhood, a Comeback Crik.

Tom Carpenter is the editor of Pheasants Forever magazine.