South of Old Faithful, a tiny stream runs beneath the Grand Loop Road—thousands of tourists drive over the little bridge every single summer day.

A trail generally follows the stream on its gentle course to Shoshone Lake. If you walk the trail, you might occasionally see a tiny brook trout finning in a deep, dark corner of the creek. More likely, if you’re not an angler and staring keenly through polarized lenses through clear water isn’t really your thing, you might notice a fish dart for cover as your shadow crosses the stream.

This unassuming brook … this … rivulet (for “brook” is even too prominent a descriptor for this diminutive trickle) is one of the more complex fishing destinations I’ve ever visited. Yes, there are non-native brookies here. In fact, any fish in this stream is non-native—before the National Park Service introduced lake trout, brown trout and brook trout into Shoshone and Lewis lakes and their surrounding drainages, the whole drainage was likely fishless.

I make a point to visit this little run now and then. Not every year, but almost. I’ve fished it from its forested, mosquito-infested headwaters to its modest “estuary” where it must crest the black-sand beach and flow into Shoshone Lake.

For some reason, this tiny little stream captures my imagination, and it does so in that Dr. Ian Malcom “life finds a way” manner. It’s not a thriving trout ecosystem (at least not at first blush). It’s not stunningly gorgeous (but its beauty grows on you). It doesn’t flow through severe, weathered country (but if you hike it after an autumn snowstorm, you’ll see more than just boot prints on the trail).

For me, this little ribbon of flowing, tannic water — this thin blue line on the map — simply beckons. I want to know how it works.

So I become a trout prospector.

Most fly fishers who possess a rod smaller than a 5-weight will understand what I’m trying to communicate. When you approach a fishing destination with light-weight tackle, you have, for the most part, adjusted your expectations accordingly. You’re not fishing to catch trophy trout that might one day adorn the wall of the cabin. Instead, you’re after something more visceral. Not the “what” of fishing, but more likely the “why.”

Take this little trickle in Yellowstone. Yes, it’s small. It’s unassuming. It’s likely ignored by most anglers who are, instead, heading to sexier destinations like the Snake or Lewis rivers, the Lewis River Channel or the Firehole farther north.

But it’s part of something grander, as most small waters are. It’s part of the entire drainage of two high-elevation lakes that, for better or for worse, have been manipulated by humankind for about 130 years. No, there are no roads to Shoshone Lake, and Lewis Lake only gets drive-by treatment from most. But both lakes (and the streams that feed them) are home to a complex fishy food web that starts and ends with introduced species. And this little blue line on the Yellowstone National Park map is part of that web.

As I “prospected” the stream recently, I knew I’d catch brook trout. These introduced exotics from the shoulders of Appalachia are now among the most prominent salmonids throughout the park. Over the years, though, I’ve often wondered why I wasn’t catching more brown trout in the stream—I’ve seen redds in the broader waters of the creek near its confluence with the lake, and it’s a near certainty that young-of-the-year browns use the stream as a nursery before retreating to the lake once they reach a reasonable size.

So, on this “prospecting” trip, I was hunting for browns. I knew they’d be small. I knew they’d be just about right for the wispy little 1-weight I was using. I also knew that brook trout, in streams like this one, tend to outcompete other fish, including browns.

I considered this the fly-fishing equivalent of a gold-panning endeavor where, among the hundreds of pieces of gravelly detritus, an occasional flake of shiny metal might turn up.

Gold flakes. They turn up, often when you least expect them to.

This is likely the logic behind “prospecting,” and one of the reasons that 1-weight fly rods exist in the first place. It’s about treasure, and the effort it takes to look for it. It’s about getting out of the car and wandering a blue line on the map in real life. It’s about mosquitoes that feel as if they might be able to carry you off if they had the good sense to work together to drain your body of blood. It’s about stealth and accuracy. It takes commitment.

If this isn’t your thing, don’t ditch the 5-weight. But if exploration turns your crank … if the discovery process lights your hair on fire, even just a little, then a light-weight rod or two ought to occupy a corner of your closet.

These tiny, delicate implements can be transformed into the gold pan and the screen, and every now and then, a piece of treasure might just turn up.

Chris Hunt is the national digital director for Trout Unlimited. He lives and works in Idaho Falls, and is the author of the newly released book, “Catching Yellowstone’s Wild Trout: A Fly Fishing History and Guide.” 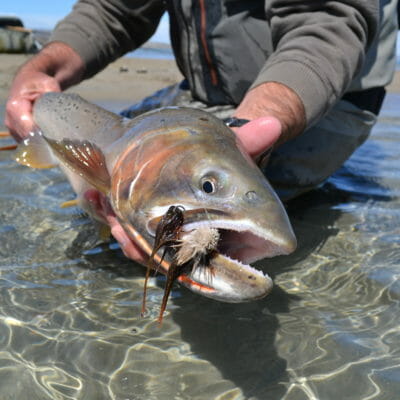 Voices from the River: Cutthroat Country