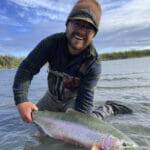 Many anglers think of Alaska as pristine and untouched, and, while much of it is, it also has a long and rich history of resource development that contributes to the culture, character and camaraderie still present at the core of many Alaska communities.

More than a century ago, salmon canneries and fish processors boomed, early homesteaders and prospectors flocked to Alaska in search of gold, trappers eked out a hard living from pelts, and loggers felled ancient Sitka spruce for aircraft in the Great War. Because of Alaska’s seemingly limitless abundance, the urgency of the times, and our limited understanding of how our actions impact the world around us, too little care was given to our streams, our fish and our wildlife.

Resurrection Creek, on the north end of the Kenai Peninsula near the community of Hope, still shows scars from placer mining that occurred more than 100 years ago. Where the creek once meandered and snaked its way through the floodplain on its way to the ocean, tailings piles now line the riverbank and the stream flows straight through an artificial channel. Where side channels, pools, and logjams once provided crucial rearing habitat for young salmon, the stream now flows too fast to provide refuge. Yet, as a testament to their resiliency, Resurrection Creek’s salmon, trout and char persist—albeit in reduced numbers.

In 2002, the U.S. Forest Service, which manages the land around Resurrection Creek, undertook the first major restoration effort on Resurrection Creek. Restoration was planned along two sections of the stream: a 1.5-mile segment at the head of the valley and a 2.2-mile segment a bit downstream in the floodplain. Restoration at the upstream segment was completed in 2007 and showed immediate benefits. Adult Chinook salmon numbers increased six-fold after the project’s completion, and the population of all salmon species in the stream continue to increase today.

Unfortunately, after completing Phase I of the restoration project, work ground to a halt and, as the years ticked by, it became more and more uncertain whether Phase II would ever get underway.

Enter a unique and fruitful partnership

In the meantime, Trout Unlimited and Kinross Gold, a mining company with operations around the world, formed an increasingly fruitful partnership. Kinross and TU teamed up to reconnect more than 25 miles of important redband trout habitat in Nevada. Kinross helps TU put on several youth fishing events and camps in Nevada and Alaska, and it helps support an annual fishing trip for members of the Armed Forces in Alaska. In one of the more significant water right donations in history, Kinross helped TU secure an additional 3 billion gallons of water per day for tributaries of the Yellowstone River in Montana to alleviate high stream temperatures that are lethal to trout. In recognition of these successes and its long-standing commitment to our fish and waters, Kinross won TU’s 2019 Corporate Conservation Award.

Not content to rest on their laurels, discussions began in earnest between TU staff in Alaska and Kinross’ Alaska staff last winter about how to expand the partnership and undertake even larger and more consequential projects in Alaska. Kinross had already voluntarily restored an abandoned mine site downstream of its Fort Knox mine, near Fairbanks, and TU and Kinross quickly recognized they could do more.

Fueled by Kinross’ commitment of more than $500,000 over three years and TU’s expertise in stream restoration, TU and Kinross established the Alaska Abandoned Mine Restoration Initiative. After sitting idle for 14 years, Phase II of Resurrection Creek is the first of hopefully many projects undertaken through this new initiative.

To celebrate the Alaska Abandoned Mine Restoration Initiative and breaking ground on Phase II, TU and Kinross hosted a kick-off event on the banks of Resurrection Creek on Aug. 13 that was attended by various VIPs, including executives for Kinross and TU, Forest Service leadership, and various local dignitaries—including U.S. Sen. Lisa Murkowski. Other key partners include the Hope Mining Co., which created a restoration corridor for Phase II through its claims, and the National Forest Foundation, which is helping leverage the additional resources needed to complete the project.

While it will take several years and millions of dollars to complete the restoration work at Resurrection Creek, the benefits could last forever. With a meandering stream channel and deep pool habitat, side channels and log jams, and native vegetation along the stream’s banks, Chinook and coho salmon will once again spawn and rear in abundance. Pink and chum salmon will become even more numerous, and populations of rainbow trout and Dolly Varden will improve.

Austin Williams is the Alaska director of law and policy for Trout Unlimited.