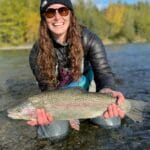 Wilderness experiences here today may not be tomorrow

Just north of Anchorage, a vast swath of land offers some of the best hunting and fishing opportunities in Alaska. The remote area west of the Susitna River currently has few roads and is teeming with healthy, productive habitat for salmon, trout and Alaska’s iconic big game species. This area is also currently under threat from a proposed industrial access corridor that would cut a 100+ mile road through the heart of the west Susitna Valley, forever changing the land and resulting in significant impacts to fish and game habitat.

As part of our effort to highlight this extraordinary area, we have begun collecting stories from the many user groups who recreate here. Our Susitna Stories series can be viewed on social media. This particular Susitna Story is so awe-inspiring it needed its own blog post to recap. Melissa’s time hunting in the West Susitna Valley has many elements that encapsulate why this area is so special, and the area she was hunting in is within the region of the industrial access corridor. One can only imagine how different this hunt would be if a gravel lined road that paved the way for numerous and yet undisclosed number of resource extraction activities in the area were built.

With the odds less than 1%, I was lucky to draw a Farewell spring bison tag, a once in a lifetime opportunity. The hunting unit is 200 miles northwest of Anchorage in the Alaska Range. Among the four introduced herds of plains bison in Alaska, this spring Farewell area is the most logistically challenging to plan. One must navigate accessibility, weather, and the world-famous Iditarod event. However, these elements make this hunt an experience of a lifetime, not a harvest.

That flight into the Alaska Range was dreamy with clear blue skis while we flew over top the Iditarod trail. The mountains through Rainy Pass are just incredible and will take your breath away. Our first night, we stayed toasty warm in a cabin called the Rohn Roadhouse, one of the Iditarod checkpoints. The temperatures dropped to -10 and the northern lights danced across the sky.

The following morning the bush pilot picked us up in his super cub to move camp closer to some bison. The elements of winter camping became real very quickly. Walking required skis and drinking water required melting snow. Building a camp site required shoveling out 3 feet of snow, to the ground, for our Arctic Oven tent.

The excitement of our first hunting day ahead helped us climb out of our warm sleeping bags and slide our feet into our cold boots. With my now-husband John and I on skis, and my dad on snowshoes, we made our way towards the herd we had spotted the day before from the air. We crested a ridge in trees, just a half mile above the bison. Fifteen degrees with blue skies, and bright reflecting snow had us wearing sunscreen and sunglasses.

Within ten minutes of us weaving around the trees, somehow the heard of bison slipped away. We learned later that we were likely spotted from the reflection of our eye wear. It was nearly impossible to differentiate tracks fresh from old. After spending the rest of the day touring the area for more bison, we laid in bed that night listening to 2 groups of wolves on either side of us, howling back at one another.

On day two of hunting, we carefully returned to the same ridge in hopes of the bison’s return. We spotted a new herd feeding on a knob halfway up a mountain side, where sheep should have been. After a few hours of glassing, it seemed like the only option, although not a good one, was to climb almost straight up after an animal that should have been on the plains.  As we climbed, we learned the wolves had been using our ski trail the night before. After an hour and a half trek, we stopped, so I could get off my skis and I creep quietly over the edge to the knob we saw them last. I crawled among the fresh bison tracks and poop, which nearly had steam coming off it, and realized the wolves had been there first and chased them off.
We’d been given the slip again.

Our pilot said there was some weather moving in and if we wanted to move, now was the time. So, with refresh energy from a new hunting area, we moved camp to a lake a few miles away. During our evening scouting from higher elevation, we discovered a new herd of bison.

The morning came and we returned to our advantage viewpoint. Thank goodness, the bison are still there and better yet we found the Iditarod trail to get to them. With glacier sleds in tow, we skied and snowshoed our way down the trail. As the easy walking ended, we branched off breaking trail across a lake and into the old wildfire burned terrain. My dad led the way and stopped dead in his tracks, the same frozen stance he does when he spots an animal. We clipped out of the skis, dropped the sleds and backpacks, and began the waddle through the hip high snow to get a good view. We crawled up to a dead tree and I got myself a rest. All the dead trees made it hard to see but there were 3 bison in clear view.

Within a few minutes, the first bison got up, and started walking towards the brush, which triggered the second to get up. The second one moved towards the brush. The last one left was laying down still and eventually got up. “I’m going to shoot,” I whispered to my dad. I do my routine 3 in and out breaths. My left hand grips my 300 short mag tightly, just the way I’ve practiced 100x times before.  On my exhale, my right hand squeezed the trigger slowly and the shot fired. I squint my shooting eye through my scope to see the bison take 3 steps and fall.

My dad and I make eye contact and a smile stretches across his face. The adrenaline flooded me and tears of excitement came to my eyes. The moment when all the hard work pays off and it all comes together. We watched the bison fifteen minutes before approaching. Then the real work started. John and I trekked back towards the lake campsite with full loads in our backpacks and sleds. We did one more final pack out of the meat and by 6 pm we were searing bison back-strap over our camp stove. We laid in the tent that night and my dad looked at me and said, “Yup today was a good day.”

What a week that was in the Alaska Range. A backcountry adventure connecting with the land and loved ones, free of development and crowds. It was one of the greatest outdoor adventures I’ve experienced. I hope this land remains that way for future generations: raw, pristine, and wild.

All photos courtesy of Melissa Castle