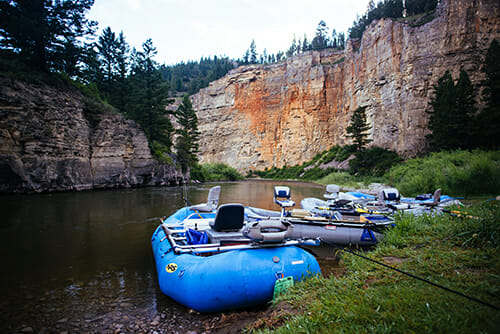 Energy development can have significant impacts on coldwater resources. Given that unavoidable truth, Trout Unlimited has long preached the benefits of responsible energy development. The basic idea is simple: With sensible policies and practices in place, the nation’s energy needs can be met without jeopardizing coldwater fisheries and watersheds.

We know that decisions about how and where development occurs have long-term implications for fish and wildlife. A decade ago, Trout Unlimited joined land managers, planners, scientists, and fish and wildlife experts in offering a series of responsible energy development proposals aimed at protecting fish and wildlife habitat. We recommended that planning be conducted at a landscape scale to identify cumulative effects and subsequent negative implications, that development impacts to habitat and water quality be carefully monitored, and that site reclamation be prioritized. That energy policy be based on sound science. That certain areas be put off limits if impacts from energy development cannot be avoided or adequately minimized. And that sportsmen and women have a seat at the table.

TU is dedicated to responsible energy

In 2015, Trout Unlimited’s Board of Trustees developed a responsible energy development policy to guide our efforts to protect coldwater fisheries from the harmful impacts caused by oil and gas development. Trout Unlimited devoted special attention to threats from the rise of hydraulic fracturing, an energy development technique that requires the injection of millions of gallons of water per well and results in significant volumes of “fracking” wastewater. Our policy encourages working with regulators, land management agencies, conservation partners, other citizens, and willing industry partners to address potential hazardous impacts of this practice on coldwater fish and their habitat.

In 2017, Trout Unlimited released the report, “Lessons Learned: A Blueprint for Securing our Energy Future While Preserving America’s Sporting Heritage.” The report was produced by Trout Unlimited in partnership with 18 sportsmen’s organizations and businesses. Its intent was to urge “smart-from-the-start” planning, public engagement and consideration of the long-term impacts on fishing and hunting opportunities in response to efforts to increase and speed up energy development on public lands. The report calls for well-planned oil and gas drilling and production by featuring examples of where this has and has not been done. The report also names areas where the potential remains to do things right, because of the involvement of sportsmen and other community members.

In partnership, Trout Unlimited and  Western Energy Project  offer a GIS spatial analysis energy assessment tool using the best available science for Colorado, Nevada, Montana, Wyoming, Utah, Idaho and New Mexico.  The tool will function to help TU and others with decision-making to focus our efforts with the Forest Service and BLM that identify public lands that have low potential for oil and gas yet may threaten sensitive coldwater fisheries if leased and developed. For users, layers can be added, such as upcoming oil and gas lease sale parcels (that have available shapefiles) and used for decision-making based on important criteria including wildlife values, coldwater fisheries values, oil and gas potential, land ownership and others.

In Pennsylvania, Trout Unlimited has assessed more than 800 streams to document trout populations as part of a state initiative that has added more than 7,000 miles to the list of officially recognized wild trout streams. These waters receive special regulatory protections in a state that has seen extensive hydraulic fracturing of the Marcellus shale play over the past decade.

In 2010, Trout Unlimited participated in developing oil and gas policy reforms with the BLM resulting in stronger protection measures at the leasing stage and increased transparency and public engagement in the leasing decision process. This reform policy also resulted in the development of Master Leasing Plans on public lands that created a more thoughtful and considerate process for developing resources in sensitive fish and wildlife areas.

In Wyoming, Trout Unlimited was instrumental in passing the Wyoming Range Legacy Act in 2009 to protect 1.2 million acres in the Bridger-Teton National Forest from oil and gas development. The act conserved prime habitat for three subspecies of cutthroat trout, as well as elk, antelope, sage grouse and mule deer. Trout Unlimited later persuaded the  U.S. Forest Service to  block leases on 39,000 undeveloped acres across 30 lease parcels inside the area protected by the Act.

On Colorado’s Roan Plateau, Trout Unlimited first opposed oil and gas leasing and eventually participated in litigation that successfully blocked development in sensitive Colorado River cutthroat trout habitat. We then spent two years negotiating a settlement that, in 2016, resulted in a Bureau of Land Management (BLM) plan that will guide management for the next 20 years.  The BLM plan closes most of the top of the Roan Plateau to oil and gas leasing, including the Trapper and  Northwater  Creek watersheds, areas that encompass the best native cutthroat trout habitat on the Roan. The plan also provides additional protections for approved leasing areas.

“…some natural areas of the Roan are too special and valuable to drill, while other areas can be responsibly developed to help meet our energy needs.”

Most recently, Trout Unlimited has supported the Delaware River Basin Commission’s rulemaking process to place the watershed off limits to hydraulic fracturing, protecting the wild trout fishery below the dams on the Upper Delaware River.

In Virginia, Trout Unlimited advocated the protection of coldwater habitat in the George Washington-Jefferson National Forest, which supports 60 percent of the state’s native brook trout streams. This led the Forest Service to halt future  energy  leasing, effectively preventing development in more than 80 percent of the forest.

Percent of leased lands not being developed

Percent of leases offered that received bids from industry

Together, the Coalition developed a vision for the area, which culminated in a sportsmen’s alternative that includes a Master Leasing Plan.  A Master Leasing Plan  wouldprovide the BLM a tool for managing this landscape using a balanced and well-planned approach to development while protecting critical Colorado River cutthroat trout and big game habitat. Although the new administration has cancelled these plans, an alternate “smart-from-the-start” approach has gained broad support from residents and local elected officials, including the Sweetwater County Commission and the Mayors of Rock Springs and Green River. The proposal allows for various levels of oil and gas development in the majority of the 522,000-acre area, but also promotes safeguards for important fish, wildlife and recreational values.

Acres of leases not being developed